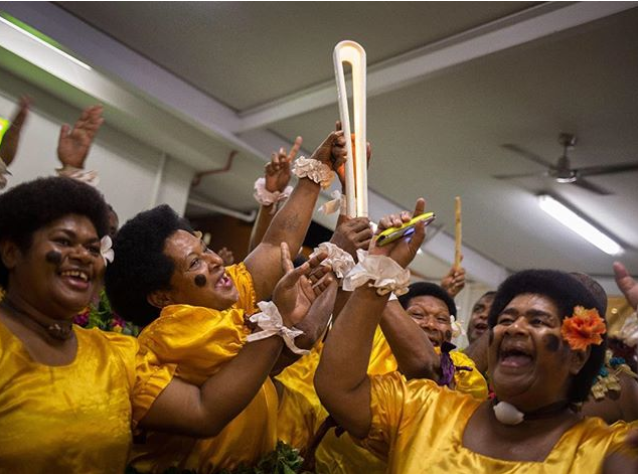 The Gold Coast 2018 Queen’s Baton has arrived in Fiji for two days of celebrations as its tour of Oceania continues.

The Baton was welcomed by the Minister for Youth and Sports, Laisenia Tuitubou, and Fiji Association of Sports and National Olympic Committee (FASANOC) President Joe Rodan.

Traditional Sabeto performers were also part of the welcoming ceremony, with the aim of showing off the culture of the village.

Having not travelled to Fiji in the build-up to the Delhi 2010 and Glasgow 2014 Commonwealth Games, it is the first time the country has hosted the Baton since it toured en route to Melbourne 2006.

Fiji did not participate at Delhi 2010 due to the country being suspended from the Commonwealth at the time.

The suspension also prevented them from being visited during the Glasgow 2014 Baton relay, however they competed at the Games due to the sanction being lifted in time.

It is expected to visit a number of local schools and sporting facilities in the country, including the regional tennis centre and the Fiji Football Association.

FASANOC states the Baton will visit the Volivoli Resort, which is home to the largest population of nesting hawksbill in Fiji, as well as providing a home to loggerhead turtles, bumphead parrotfish and reef sharks.

It will conclude its visit with a trip to the Navunibitu Catholic Primary School and Nabou District School, before heading to the Fiji Museum.

A special event will be held at the museum, featuring the Australian High Commission.

The Baton headed to the country following visits to the Cook Islands and Tonga.

Its visit to the Cook Islands was used to highlight the issue of climate change, which has proved a threat to the 15 islands.

It passed several solar farms and water desalination plants, expressing the Cook Islands' ambition to be 100 per cent solar and provide every village in Rarotonga with clean water by 2020.

During the Baton’s stay in Tonga, a relay took place from the local college to Ha’ateiho through to Vuna Wharf.

Samoa will be the next country to be visited by the Baton, with Tuvalu, Papua New Guinea and the Solomon Islands following.

The Baton will then head to Vanuatu, Norfolk Island and New Zealand.

It will eventually arrive in Australia on Christmas Eve to begin a 100-day tour across the nation, concluding at the Games' Opening Ceremony.

The Baton Relay was launched during Commonwealth Day on March 13 in London, where the Queen handed it to the first Batonbearer, Australian track cycling legend Anna Meares.

Prince Charles is due to remove the message placed into the Baton by Queen Elizabeth, during the Opening Ceremony of Gold Coast 2018 on April 4.