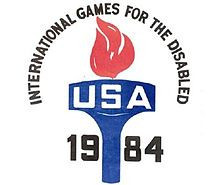 In 1984 the four disability groups (amputee and les autres, cerebral palsy, visually impaired and wheelchair) were scheduled to compete at the Paralympics in the USA as the city of Los Angeles was set to host the 1984 Olympics.  However, the independent sports organisations for athletes with a disability were voluntary organisations that had no formal relations with the Los Angeles Olympic Organizing Committee (LAOOC) and only a tenuous relationship with the United States Olympic Committee (USOC).

In 1980, the American National Wheelchair Athletic Association (NWAA), an affiliated organisation to the International Stoke Mandeville Games Federation (ISMGF), announced that it would hold its own Games for wheelchair athletes at a separate venue.  As a result, the other three non-wheelchair disability groups combined their efforts and chose New York as their Games venue.  Amputee and les autres athletes, cerebral palsy athletes and visually impaired athletes competed in New York while athletes with spinal cord disabilities competed on the other side of the Atlantic in Stoke Mandeville.

Funding for the New York Games came from a combination of private and governmental sources, with the larger parts donated by the US Federal Government through its US Information Agency.

Media coverage of the New York Games was the most extensive in the history of disabled sport.  The major US television networks and newspapers were present, as well as BBC TV, Dutch TV, West German TV and Swedish radio and TV.  US President Ronald Reagan officially opened the Games at the Opening Ceremony in Mitchel Park.  In the course of the Games, more than 80,000 spectators cheered on the athletes across a total of 13 events.

The Games in Stoke Mandeville were held after events in New York had reached a conclusion.  The British Paraplegic Sports Society (BPSS) organised the Games at the Stoke Mandeville Stadium.  The Opening Ceremony were presided by HRH Prince Charles, who officially opened the Games.  A crowd of 3,000 cheered on the teams in the wheel-past.  For the first time ever, a wheelchair marathon was held at the Paralympics.

Though the 1984 Games were a success organisers agreed that the Games should be held at the same venue in the future due to the fact that the success of the Paralympics calls for unified representation and participation.