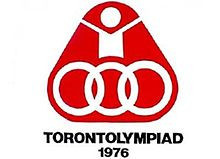 The Games faced several boycotts due to the participation of South Africa whose policy of apartheid was widely criticised.  For the first time, 261 amputees and 187 visually impaired athletes were included in the program as well as several new events.

The 1976 Games were far more difficult to organise than the Paralympics that had preceded them because more sport classifications were involved than ever before.

Also, the accommodation of athletes with differing disabilities posed new challenges for the host city.  As suitable lodging could not be arranged in the immediate area of the events, school buses were hired and loading docks were constructed to transport the athletes and staff from the event venues to their accommodation.

Disability groups were housed separately, wheelchair athletes stayed at York University and other groups stayed at the University of Toronto and the Institute for the Blind.

The Toronto 1976 Games were the first Paralympics to be broadcast daily to over 600,000 viewers in the Southern Ontario area.  The Games proved very popular with the people of Toronto and around 24,000 spectators attended the Opening Ceremony at the Woodbine Race Track.

With new disability groups, a variety of new events were introduced to the Paralympic Games.  In wheelchair racing, new distances of 200m, 400m, 800m and 1500m were added.  Rifle Shooting became a medal event (following demonstrations at previous International Stoke Mandeville Games) and Goalball (a demonstration event at the 1972 Paralympics in Heidelberg), was also featured as a medal event.

The Closing Ceremony at the Centennial Park Stadium saw a crowd of around 5,000 attend and bought a fitting end to a colourful and successful nine-day event.