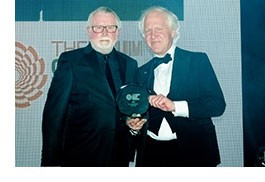 Dunsar Media, publishers of insidethegames.biz, are delighted to announce huge success at the Online Media Awards 2015 which were presented last week at a glittering ceremony in London’s West End.

Owen, who has been writing for insidethegames.biz for eight years, was recognised for his hard work, knowledge and skill when reporting for the website. “He gives a robust touch to his subject,” the judges said when choosing Owen, the former sports editor of the Financial Times.

Owen’s exclusive stories for insidethegames.biz have included news that the International Olympic Committee’s TOP sponsorship programme had broken the $1 billion barrier and that the drug testing laboratory in Rio de Janeiro, due to be used for the 2014 FIFA World Cup and the 2016 Olympics and Paralympics, had failed a “blind test”, throwing its future into jeopardy.

Recently, he has set the agenda for changes to the venue plan for the 2020 Olympics and Paralympics in Tokyo and the crisis currently taking place at FIFA following the re-election of Sepp Blatter as President, and his subsequent unexpected decision to step down.

“David Owen’s work for insidethegames.biz is always outstanding and he is one of the great sports political writers of his generation, especially when it comes to analysing complicated financial matters,” said Duncan Mackay, the editor of insidethegames.biz. “He is trusted by sports leaders around the world, allowing him to give our readers a unique glimpse behind doors that would normally remain closed.”

Owen had travelled back from Lausanne, where he had been attending the Executive Board meeting of the International Olympic Committee, to receive the award.

“This award is very well deserved,” added Mackay. “But it is a testament to the strength we have here that the other two shortlisted candidates, Alan Hubbard and Mike Rowbottom, were also from insidethegames.biz. It is no wonder with such a team of outstanding journalists, along with our senior reporter Nick Butler, that insidethegames.biz is regarded by everyone as the world’s leading independent Olympic news website.”

In the Best Commercial Innovation category, insidethegames.biz was the only entry to receive a Commendation behind the winner, The Financial Times, one of three entries from that organisation. Other shortlisted entries for the category included Dennis Publishing for AutoExpress.co.uk, Bauer Media Group for Heatworld.com and TheSchoolRun.com.

The judges were impressed that insidethegames.biz had established commercial relationships with the Association of National Olympic Committees, the International Judo Federation, Baku 2015, the first European Games, currently taking place in Azerbaijan, the Olympic Council of Asia, the World Karate Federation and the World Taekwondo Federation.

This included setting-up bespoke online sections within insidethegames.biz for each of them – allowing them to showcase their work, much of which had previously gone unpublicised – and also, for the Association of National Olympic Committees and Baku 2015, publishing and distributing specially produced high-quality magazines that are distributed throughout the world. 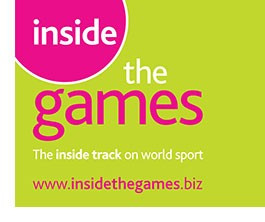 “I am delighted that insidethegames.biz is being recognised in the media industry as a whole for both journalism and commercial strategy, which compliments and adds to our status as the leading news website in the Olympic Family,” said Sarah Bowron, the managing director of Dunsar Media Company Limited. “This rewards the hard work and dedication of all the team.”

The Online Media Awards, which are organised by Britain’s leading media and marketing title The Drum, recognise the best in online news and journalism and announced its award winners at a ceremony held at the 5-Star Marriott Grosvenor Square hotel in London.

The Online Media Awards attracted entries from some of the world’s leading websites including Al Jazeera, The Huffington Post, The Guardian, The Times, CNN, USA Today, Sky, Channel 4 / ITN, ITV, Sunday Times, BBC and Reuters, to name a few. This year’s awards were sponsored by iomart and supported by Press Gazette, the Press Association, Society of Editors, NUJ and the British Journalism Review.

The Awards were judged by a 27 strong international panel including;