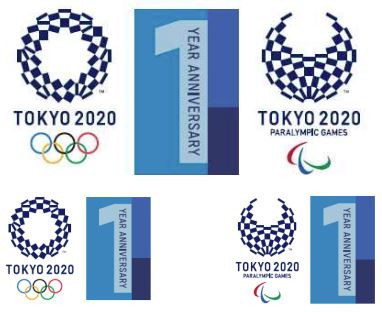 The Tokyo Metropolitan Government has revealed the emblems which are set to mark the first anniversary of the Tokyo 2020 Olympic and Paralympic Games.

The emblems are expected to be used in the Tokyo 2020 Games one year anniversary commemorative project as well as in Tokyo municipalities and in municipalities where competition venues were located.

The emblem is set to be available in the five colours used at competitive venues and city dressing during Tokyo 2020.

These are indigo blue, red, cherry, blossom, wisteria and pine.

The Tokyo 2020 Games one year anniversary commemorative project aims to recall the significance, emotions, memories and legacy of the Games and to pass the legacy on to the next generation.

A commemorative period has been scheduled to take place between July and October.

Japan enjoyed a successful home Olympics as they ended the competition third in the medal table with 27 golds, 14 silvers and 17 bronzes.

Only the United States, who secured 39 golds, 41 silvers and 33 bronzes, and China, who acquired 38 golds, 32 silvers and 18 bronzes, managed to finish higher.

The host nation notably improved in the Paralympics where they jumped from 64th at Rio 2016 with no golds, 10 silvers and 14 bronzes to 11th four years later after winning 13 golds, 15 silvers and 23 bronzes.