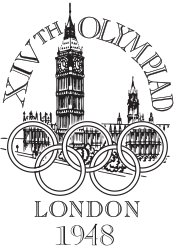 Tokyo had been selected in 1936 to host the 1940 Olympics Games. It was a bold idea to stage the Olympics in Asia and in a country that was still rather mysterious to the West.

But Japan and China went to war in 1938 and the Japanese Government ordered the organising committee to stop preparation after 16 sites had already been prepared to host Olympic events.

The International Olympic Committee then called on Helsinki to take over. War again intervened, as the Soviet Union invaded Finland in 1939. By September, most of Europe was engulfed in war and it became obvious, even to the stubborn IOC, the Olympics would have to be cancelled.

In June of 1939, the IOC awarded the 1944 Olympics to London. Again, World War Two forced cancellation. A year after the war ended, London was once again selected, this time to host the 1948 Olympics.

They only had two years preparation time before an army of international athletes would descend on the city (London has seven years to prepare for the 2012 Games).

Also lacking was food and accommodation. Rationing was more severe in the immediate post-war years than it had been during hostilities and the country was massively short of homes as a result of wartime bombing.

Organisers considered putting up the visiting athletes in Prisoner of War camps, but in the end military barracks were modified for the men, and schools and colleges were made available to the sportswomen.

A temporary track was built at Wembley Stadium, for which nearly £200,000 was allocated out of a total Games' budget of only £650,000, and many government buildings were converted to temporary uses, especially for the media.

Countries were also encouraged to bring their own food and those nations that could afford to do so made donations to help out the poorer countries. But Japan and Germany were banned for their role in the War and Joseph Stalin's Soviet Union declined an invitation to compete.

At times the Games were in danger of becoming an Ealing comedy. Female athletes had to make their own uniforms, boxers got fit on custard and jelly, the British athletics team trained at Butlins, the gymnastic equipment had to be borrowed from abroad, the torch relay ran into numerous difficulties (including communist rebels who killed a policeman guarding the official party) and the British flag for the opening ceremony even went missing.

Fortunately Roger Bannister - to find immortality five years later when he became the first man in history to break four minutes for the mile, but here as the British team's assistant chef de mission - was on hand to save the day, sprinting through Wembley car park to salvage a spare flag from the boot of an officials car, which he broke into to retrieve.

Despite the backdrop of post-war austerity, London managed to host an Olympiad that exemplified the spirit of amateur sportsmanship.

These were also the first Olympics that were embraced by the still infant mass media. Many events were broadcast on television, though only within the British Isles where very few people still actually owned a set, while radio coverage was carried around the world via short-wave transmission.

It was for the first time a woman, Fanny Blankers-Koen of the Netherlands, who emerged as the star of the Games. A 30-year-old mother of two children, Blankers-Koen won individual gold medals in the 100 and 200 metres and the 80m hurdles, and claimed a fourth gold running the anchor leg on Holland's 4x100m relay team.

At the other end of the track-and-field age spectrum was 17-year-old Bob Mathias. Just two months after graduating from high school in California, Mathias was competing in only his third decathlon. He was third after the first day of competition, but he pulled into the lead with a tremendous discus throw on the second day and held on to win in the concluding 1500m.

The surprising winner in the men's 100m was Harrison "Bones" Dillard of the United States. The world record holder in the 110m hurdles, Dillard failed to qualify in that event and barely made the team by finishing third in the 100m trials. He and teammate Barney Ewell were both clocked in 10.3sec, equalling the world record, but judges awarded Dillard the gold medal after studying the photo finish results. (This was the first time, incidentally, that the photo-finish camera was used at the Olympics.)

Britain only won three golds, finishing twelfth overall in the medals table: the first time a host nation had not finished in the top ten.

But medals and glory certainly were not everything. London had, against all the odds, pulled off hosting successful Games.