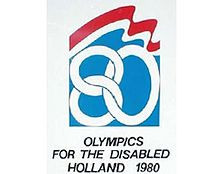 Although it was expected that the 1980 Paralympic Games would be held in Moscow, the same country and city that were hosting the Olympic Games, these plans never materialised.

A public TV program called Telebingo was created in 1976 to help raise funds to organise the Games while the Dutch government assisted mainly with military support, such as the use of army barracks to house athletes and officials.

The Opening Ceremony was attended by a 12,000 strong crowd at the Papendal stadium.  Of the 1,973 athletes that participated in the Games, 1,055 were wheelchair athletes, 452 were amputee athletes, 341 were visually impaired athletes and 125 were cerebral palsy athletes, who were participating for the first time.

One of the top athletes at the Arnhem 1980 Games was Neroli Fairhall of New Zealand.  Fairhall, who won the wheelchair women's doubles Archery competition, astonishingly went on to compete at the Los Angeles 1984 Olympics and finished an impressive 35th out of more than 56 competitors.

The Arnhem 1980 Paralympics successfully consolidated the sports programmes of the four major disability groups (amputee and les autres, cerebral palsy, visually impaired and wheelchair).  Each group was also represented by their international sport federations, in one venue for the first time.