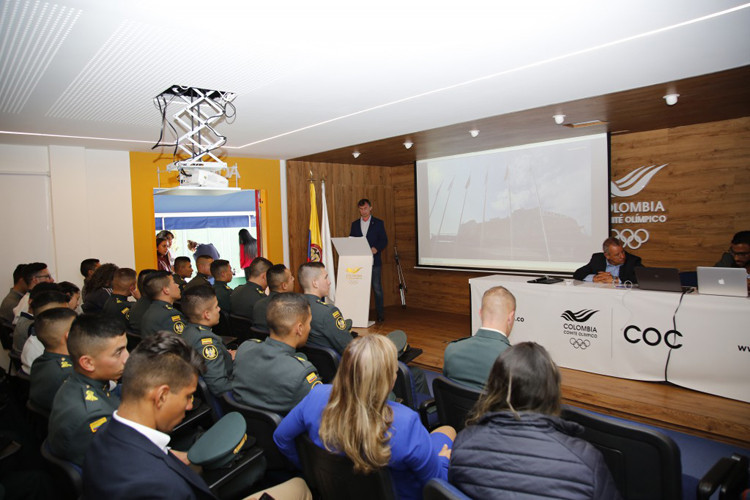 The Colombian Olympic Committee (COC) has held a conference in Bogotá on the development of university sambo in the country.

Organised by the Colombian Sambo Federation (CSF) in cooperation with the COC, the event brought together students, teachers and special guests from various universities.

In opening the conference, COC President Baltazar Medina emphasised the importance of promoting sambo, a relatively new sport in Colombia.

CSF President Omar Lopera made a presentation on the expansion of sambo in the Americas and particularly in Colombia over the past 20 years.

He also introduced Mikhail Martynov, senior coach of the Moscow Sambo Federation and a former world champion, as the main speaker of the conference,

Martynov recounted the history of sambo's inception and development, stressing what a tremendous role the student movement played in the process.

He also explained that sambo is a "science of defence rather than attack, a science that shapes one's life experience and attitudes, and moulds one's character".

Furthermore, Martynov briefed the audience on various projects undertaken by the International Sambo Federation and the sport's national federations, including the projects "Sambo to School" and "Sambo to Universities and Colleges".

Apart from the reports, the conference participants watched videos dedicated to the history of sambo and university sambo.

They were also informed that sambo has been included on the programme for the 2023 Summer Universiade in Russian city Yekaterinburg and that the 2020 World University Sambo Championships, under the aegis of the International University Sports Federation, is to be held in Kazakhstan's capital Nur-Sultan.

The conference brought together around 70 people, including students and teachers of the Colombian Military Academy, the University of Applied and Environmental Sciences in Bogotá and the University of Cundinamarca in Fusagasugá.

In October of last year, the CSF reached an agreement with the national police of Colombia in a bid to tackle drug abuse among schoolchildren.