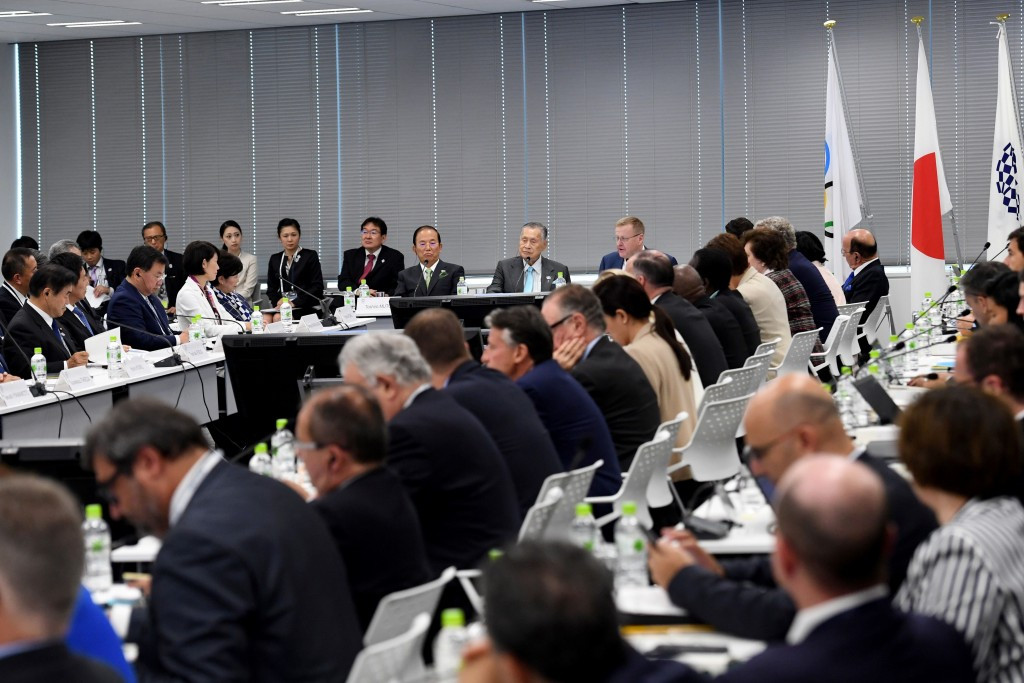 The senior IOC vice-president made the assertions as the fourth Coordination Commission visit began here today, with meetings set to continue until Friday (June 30).

Coates warned Tokyo 2020 at their last Coordination Commission meeting that a proposed budget cap of ¥2.2 trillion (£16 billion/$20 billion/€18.8 billion), had risked "giving a bad impression" to cities considering bidding for the Games.

While acknowledging the reduction in the budget for the Games, Coates urged organisers and different levels of Government to continuing working towards making savings.

“What has pleased us is that, although you have got the budget down to around $13 billion (£11 billion/€13.1 billion), the emphasis in everything I am reading is you are continuing to work together to further reduce costs,” Coates said.

“We know you can pay for the Games, you have a strong financial resource and the Government, with the support you have been getting from the private sector and sponsorship.

“It is important to us that when the costs for the Games in the final analysis become public, they are going to be a reason to attract candidate cities to bid, rather than to scare them off.

“While we are pushing you hard on saving money, it is for our own futures.

“You have to do it for your taxpayers.”

A second budget is expected to be produced and revealed later this year, where further savings could yet be made.

An agreement over the division of responsibilities and costs was reached by Tokyo 2020, the capital's Metropolitan Government, the Japanese Government and Local Governments of seven prefectures and four cities which will host events, last month.

Representatives from the seven prefectures - Hokkaido, Miyagi, Fukushima, Saitama, Chiba, Kanagawa and Shizuoka - and the four cities - Sapporo, Saitama, Chiba and Yokohama - "expressed pleasure" that the Metropolitan Government included the original candidature file, submitted to the IOC in 2013, as a document to use as a basis for further discussions on the matter.

The file states that Local Governments staging competitions will cover the bills for areas including medical services and security transportation to and from venues, but that Tokyo will cover costs for temporary facilities for venues outside of the Japanese capital.

The National Government will have responsibility for security and financing anti-doping activities during the Games.

All the parties additionally agreed to set up a "Management Committee for Collaborative Projects", which aims to further reduce costs, while optimising resources.

Coates thanked the efforts of Tokyo Governor Yuriko Koike and Tamayo Marukawa, the Minister in charge of the Tokyo Olympic and Paralympic Games, with both parties in attendance as the meeting began.

“We note that in recent weeks you have reached agreement on the overall division of roles and association of costs,” Coates said.

“I know that has not been easy and I thank the parties involved, the national and Tokyo Municipal Governments, as well as the body that drives this, Tokyo 2020.

The Coordination Commission chairman also urged organisers to include accessibility as one of their key aims for the Games and as a future legacy.

The addition of new events for the Games earlier this month, with Tokyo 2020 President Yoshiro Mori expressing his surprise at the number of changes made.

“I was a bit surprised, but it is the direction of the IOC and we fully agree with the decision,” Mori said.

“The IOC are aiming for a new generation of urban sports and we want solid discussions regarding the plans."

Mixed relay events in athletics, swimming and triathlon were among the additions earlier this month, along with mixed team competitions in judo, table tennis and archery.

Male and female BMX freestyle park and 3x3 basketball were also been confirmed as two new disciplines on the programme, while fencing will also receive two additional team events to end the current practice where two miss out on a rotating basis.

The Coordination Commission are set to visit a proposed site for the urban cluster at the Games, which would house skateboarding, sport climbing, BMX freestyle park and 3x3 basketball competitions.

A visit to the Athletes Village and new Olympic Stadium are also set to take place, with construction at the latter having begun in December.

Mori and Governor Koike also expressed their delight at Coates' re-election as the Australian Olympic Committee President, after a bitter election campaign, with the former claiming he had prayed for eventual result.

Coates, whose position as the Coordination Commission chairman was dependent on maintaining his national role, expressed his relief at being back in Tokyo following his re-election.

Rio 2016 President Carlos Nuzman also was welcomed to the Commission for the first time, following an invitation by IOC President Thomas Bach.