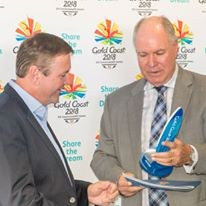 Beach volleyball was the 18th sport to be confirmed on the programme after an agreement was struck between the Commonwealth Games Federation (CGF), the Queensland Government, the Australian Commonwealth Games Association and Gold Coast 2018.

Competitions in the sport, which are set to feature two 12-team tournaments, are scheduled to be held on the iconic beaches in Coolangatta.

At a meeting to discuss the estimated cost of Gold Coast 2018, Peters gave a detailed rundown of how he expects they will need to find an additional AUD$19 million (£11 million/$14.5 million/€13 million) to incorporate beach volleyball onto the programme.

Other expected costs centre around security, transport from Gold Coast to Coolangatta, a distance of around 28 kilometres, and extra staff to run the venue.

Peters revealed they were hoping to construct a 5,000-capacity arena but “it may be more economic” to limit it to 4,000, while discussions are also ongoing about where the practice courts should be built.

Sieving of the sand will also have to be undertaken by organisers in order to meet strict guidelines set out by the CGF, Peters said.

Peter claimed they are hoping to recoup around AUD$9 million (£5.2 million/$6.8 million/€6.1 million) of the projected cost of having beach volleyball at the event through ticket sales and other revenues.

“The overall cost of adding beach volleyball to the games is just over $19 million," he said.

"We are, as we say, value engineering now to look at how we fit the venue in.

“We are planning a 5,000-seat capacity at the moment - it may well be more economic for us to run a 4,000-seat-capacity stadium.

"In terms of the main costs that you asked for, some of the costs are technology, because we need to be able to broadcast pictures live around the world.

"There is just over a $2 million cost of getting the appropriate facilities in to run live broadcasts out of that site.”

Shuttle buses to the beach volleyball venue could cost organisers upwards of AUD$1.5 million (£861,000/$1.1 million/€1 million), with AUD$1.8 million (£1 million/$1.4 million/€1.2 million) expected to be spent on employing and outfitting paid staff to run the facility during the Games.

“That is a lot of the work that we are going through at the moment,” Peters added.

“Then we come into overlay - all the temporary tents, fencing etc, to move athletes and spectators safely - and the catering that needs to be put in place to a site that is just an open site at the moment.

“They are the key parts of, I would say, the cost of putting the volleyball together.”