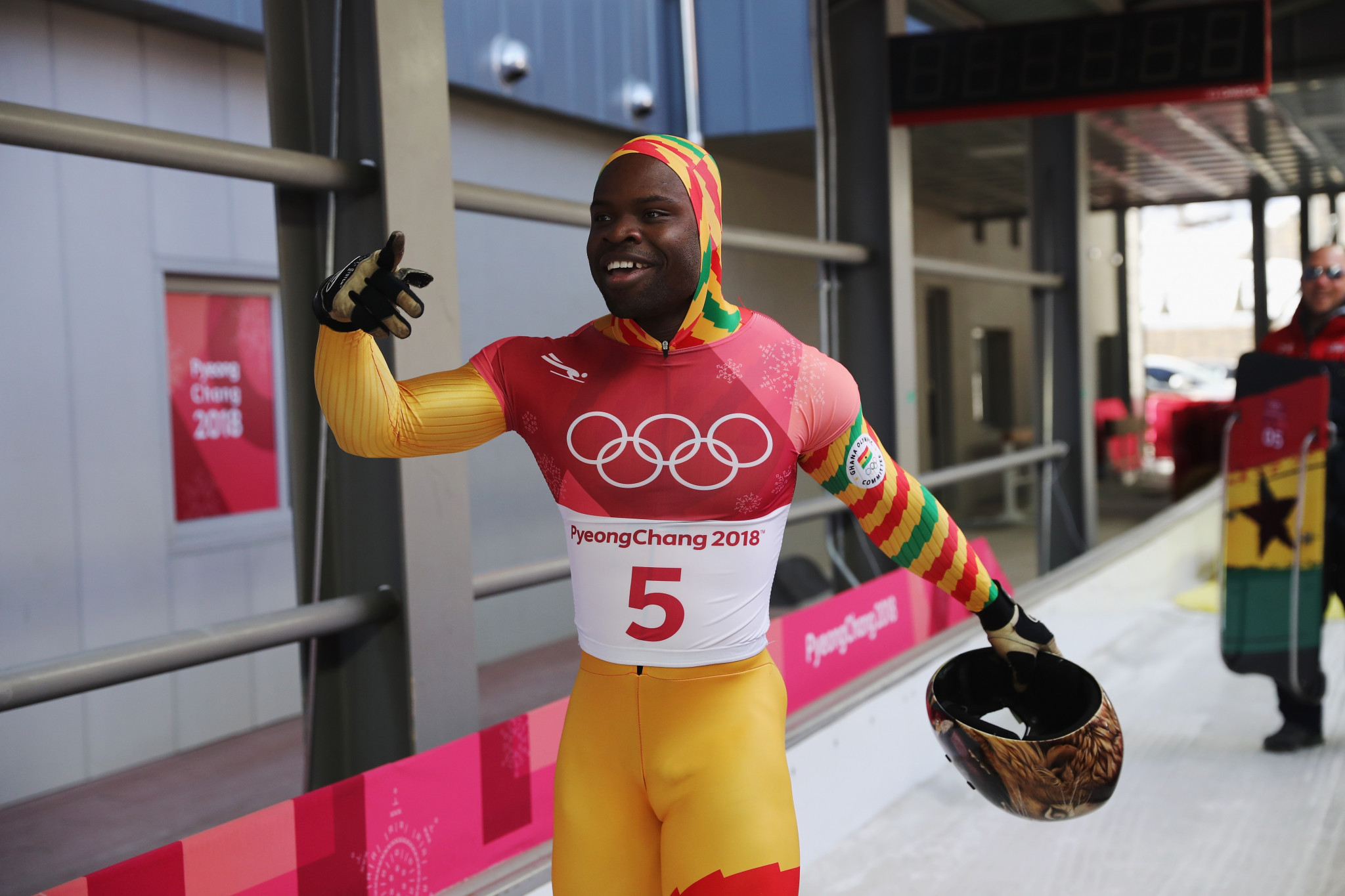 Urgent calls are being made for the reinstatement of continental quota spots in bobsleigh and skeleton amid concerns that there will be no African racers at the Beijing 2022 Winter Olympics.

Brian McDonald and Zach Lund, who coach Ghanaian skeleton star Akwasi Frimpong, fear the sport in Africa will receive a "crushing blow" if no athletes from the continent feature in either sliding disciplines at the Games in the Chinese capital.

A letter, signed by McDonald and Lund, has been sent to International Olympic Committee (IOC) President Thomas Bach, calling for a change in the qualification system to provide an opening for African athletes.

Ghana’s Frimpong and Nigeria’s Simidele Adeagbo made history at Pyeongchang 2018 when they became Africa’s first skeleton racers to compete at the Winter Olympics.

The duo both qualified for the Games via the International Bobsleigh and Skeleton Federation’s (IBSF) continental quota system.

However, the ruling was dropped after Pyeongchang 2018 and Africa now faces having no representatives in bobsleigh and skeleton.

McDonald and Lund, who worked as coaches for the United States team before helping out Frimpong, said the continental quota system was "integral to the future growth of Olympic sliding sports in Africa".

"We are requesting the reinstatement of the Olympic continental quota spots for Africa in the 2022 Beijing Winter Olympic Games," McDonald and Lund wrote in the letter.

"The importance of African representation in Winter Olympic sport is of utmost importance to the Olympic movement.

"Currently, the Olympic sliding sports will be without any African representation after immensely popular participation in the 2018 Games in Pyeongchang.

"We should not allow Olympic sport to take a step backward in terms of the inclusion of African nations successfully competing in the Winter Olympic Games."

The qualification process for Beijing 2022 is scheduled to end on January 16 with 50 places available and based on the IBSF world rankings.

McDonald and Lund claimed the reinstatement of the continental quota places would have "very minimal impact on logistics and planning" for the Games but feared it would have a "massive impact on the hopes and dreams of millions of African youth".

Frimpong is ranked 65th in the IBSF men’s skeleton standings and is the highest ranked African athlete in history in the IBSF North American Cup circuit having achieved the placing of eighth overall this season.

The 35-year-old was set to compete at IBSF Intercontinental Cup races in Altenberg and a World Cup event in Winterberg only to pull out of the German competitions after twice testing positive for coronavirus.

Adeagbo is placed 37th in the Women’s Monobob World Series and McDonald and Lund claim the costs of competing in the discipline set to make its Olympic debut at Beijing 2022 "are enough to discourage any small nation athlete from participating".

Frimpong and Adeagbo both completed a training block in October at the Yanqing National Sliding Centre in Beijing in October, but they look set to miss the Games.

"We believe it is in the best interest of the @Olympics and the Olympic community to consider the re-implementation of the #African continental quota for athletes who have proven to be competitive in their respective sport." #OlympicSolidarity @FrimpongAkwasi

"The dream of so many Africans to watch and be inspired by fellow Africans competing in the Winter Olympic Games will bear long-lasting fruit for Olympic sport," McDonald and Lund added.

"Let’s keep building on this dream and not defer it due to Inequitable quotas that didn’t take into account the massive hurdles African athletes must clear in order to train and aspire to be Winter Olympians.

"An exclusion will be a crushing blow to African athletes who worked so hard and who dared to dream what once seemed impossible.

"There are currently no athletes in either the Olympic sports of bobsled or skeleton, and in fact, very few in all Olympic sports, who have as large a following as Akwasi Frimpong of Ghana.

"The IOC would be remiss to fail to capitalise on this opportunity to once again grow the sport."

McDonald and Lund believe the continental quota system should remain in place until the "inequities and difficulties are no longer obstacles" for African nations in Winter Olympic sports.

"The colours of the Olympic rings stand for the inclusion of all continents, including Africa," added McDonald and Lund.

"Let’s do the right thing and include the African continent in these Olympic Games."

insidethegames has contacted the IBSF and IOC for comment.