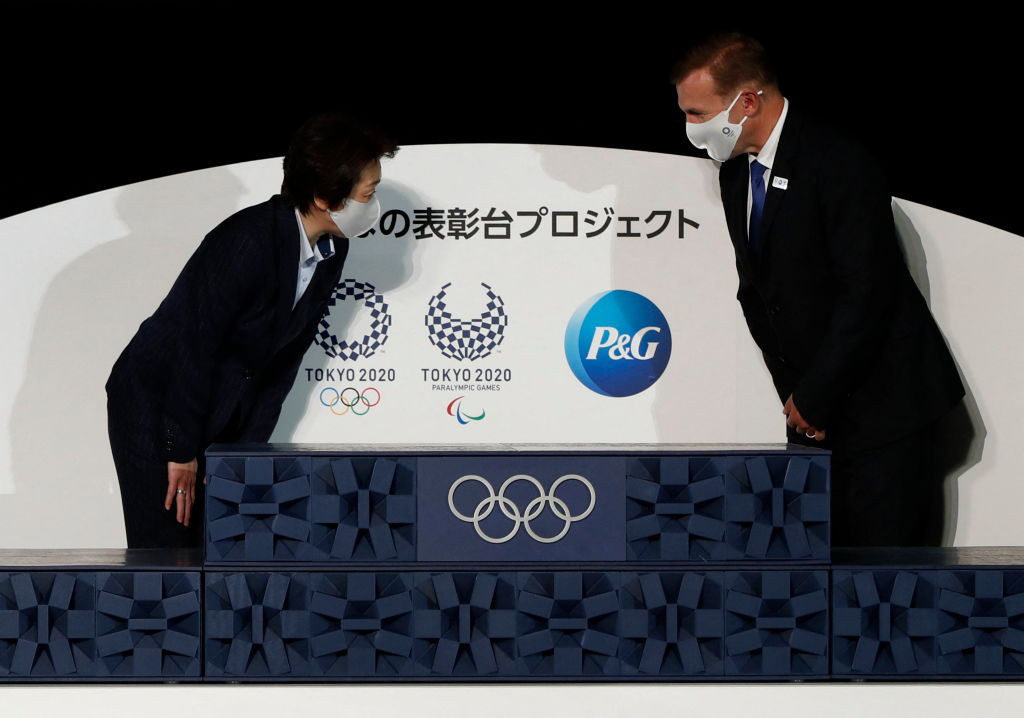 Tokyo 2020 has unveiled the medal ceremony podium for the delayed Olympic and Paralympic Games.

Made from recycled plastics, it is rendered in dark grey with the Olympic rings and Paralympic symbols in white.

"Together with the emblem, the word connecting and bonding was the major thinking behind it," said designer Tokolo Asao, who had also created the Tokyo 2020 symbols.

“For me the texture is the important thing.

"It is made from the plastic, something that might have ended up as garbage.

"We are using those empty plastic containers and different fusions of technology.

"I want this podium to connect with the next generation.

The podiums were revealed during an event in Tokyo today, which took place amid ongoing speculation as to whether the Games will go ahead.

Organisers said that some 24.5 tonnes of recycled material had been collected during the campaign, known as the "podium project" and spearheaded by TOP sponsor Procter and Gamble.

"It took a long time for me to reach the podium for the one and only time," Tokyo 2020 President Seiko Hashimoto, speed skating bronze medallist at the 1992 Winter Olympics in Albertville, said.

"I was deeply touched.

"It was a moment to feel the connection with people who had supported me throughout the years."

Presenting the Victory Ceremony podiums of the Olympic and Paralympic Games! 😍

For the first time ever, they are made of recycled plastic from Japanese household products. ♻️#Toyko2020 pic.twitter.com/rCqtcycMzw

The victory ceremonies music was premiered by the Tokyo Metropolitan Symphony orchestra with singers from Tokyo’s Philharmonic chorus, conducted by Sachio Fujioka.

Composer Naoki Sato said: "I made the music for the athletes so that they could go up onto the podium feeling very good.

"I struggled to come up with the melody and had some tough times but thinking about the Olympics and Paralympics helped me.

"I intentionally avoided all Japanese elements.

"Athletes of diverse cultures, languages and aspirations stand on the podium, so I considered that music with prominent Japanese features would get in the way of the ceremonious moments."

The music was recorded last September, but it proved impossible to assemble all the musicians at once so each contribution was mixed together digitally in the sound studio.

The "Field Cast" of medal bearers and athlete escorts will wear a predominantly indigo blue uniform.

The colour of the Uchiginu - inner wear - is in a gradation of white to indigo.

"I have respect for tradition, but I was also struggling with the thought that maybe carrying on a tradition isn’t enough," said Yamaguchi.

"So I decided to take on a new challenge while embracing kimonos and traditional Japanese attire."

A multi-layered ceremonial Kimono would have proved too hot, so Yamaguchi settled upon a design which gave the appearance of the traditional garment.

"It was a fusion of the traditional Japanese and Western costumes that could be worn in a very comfortable way," he added.

"For me bonding and connecting are really important.

"I wanted to convey our ways of craftsmanship of making costumes to put together tradition with the fusion of the future."

Since the Munich 1972 Games, the podium has been considered an important part of the "look" of an Olympic Games.

It was first introduced in 1932 at the Lake Placid Winter Olympics after International Olympic Committee President Henri Baillet-Latour saw a podium used at the 1930 British Empire Games.

The 1964 Tokyo podium featured the Olympic Rings on a simple white background and the numbers one, two and three in black to indicate gold silver and bronze.