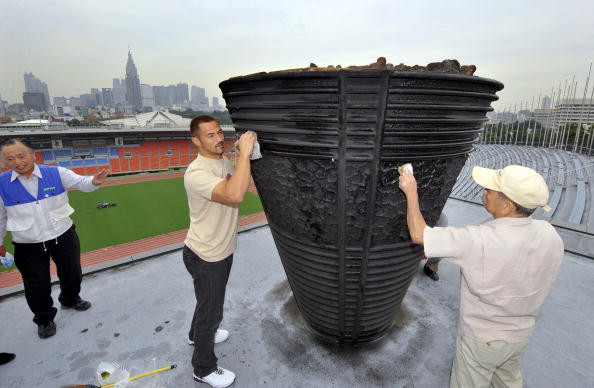 The Tokyo 1964 Olympic cauldron will be installed in a display area next to the New National Stadium here in Tokyo as a link between the two Games.

The cauldron has undergone a refurbishment in preparation for its installation and Tokyo 2020 spokesman Masa Takaya said it would help people feel the heritage of the Games, uniting both the 1964 and 2020 editions.

The Cauldron, which stands at 2.1 metres tall and weighs 2.6 tonnes, was constructed in 1958 by Mannosuke Suzuki and his son Bungo, and became an iconic symbol of the Games.

"A few years ago the cauldron was removed from the previous National Stadium.

"It went to one of the affected areas from the 2011 tsunami - Ishinomaki - and was set there for a couple of years, to be displayed as a symbol of recovery.

"After the display period it was removed and went to back to the manufacturer in the Saitama Prefecture, where it was polished and refurbished.

"There is a plan for the cauldron to be installed in the area next to the New National Olympic Stadium and people will be able to feel the heritage for the Games."

Details of the 2020 Olympic cauldron are still under wraps but it is known that the Olympic Flame will be on display in two locations.

In a bid to ensure Tokyo 2020 abides by the Olympic Charter - that the flame must be on public view for the entirety of the Olympic and Paralympic Games - the cauldron will feature at the "TOKYO WATERFRONT CITY" in Ariake, as well as at the New National Stadium.

Takaya said live sites would help to drive engagement with the public, with 30 zones anticipated during the Olympic and Paralympic Games.

He said a good response had been received from municipalities across Japan to Tokyo 2020's guidance on creating live sites in smaller regions.

"Live sites are really important for the success of the Tokyo 2020 Games," added Takaya.

"It is one of our key initiatives on our engagement activities.

"That has been seen in the cities for the Rugby World Cup and there has been an electric atmosphere at those live sites."