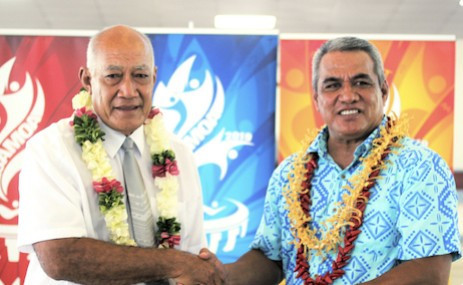 Samoa 2019 have been given control of the Faleula Methodist Compound which will house athletes and team officials during next month's Pacific Games.

The Samoan Methodist Church and Samoa 2019 held a ceremony to mark the handover of the site.

"On behalf of the Government of Samoa and the Games Organising Committee, I would like to thank the President and the Methodist Church for availing the Faleula Methodist Compound for the XVI Pacific Games," said Loau Solamalemalo Keneti Sio, the Samoa 2019 chairman.

"Through this wonderful support from the Methodist Church, athletes and officials will get a chance to experience Samoan culture and our world famous hospitality."

Around 4,000 athletes and team officials are expected to be housed at the compound, which will serve as the Games Village.

Plans to use the compound as the Village were revealed back in November.

Teams are expected to be stay in 63 houses and four school compounds throughout the duration of the Games.

The George Brown pre-school and primary school sites will be used, along with the Wesley College and the Laumua o Punaoa Technical Centre.

Each delegation will be allocated a house which will serve as a central hub for their teams.

The village will also include spaces allocated for team management, as well as medical and physiotherapy needs.

A polyclinic, police headquarters, a dining hall, banking and a money exchange will also be present, along with tourism information, merchandise, training facilities, laundry services and transport.

Organisers have confirmed that due to the size of the compound, an internal shuttle for athletes and team officials will operate in various areas within the Games Village throughout the duration of the event.

The Ministry of Health have also led fumigation efforts at the Village, with work taking place earlier this month.

"Fumigation deals with the elimination of unwanted pests such as mosquitoes which carry diseases.

"We are looking at getting rid of their breeding areas.

"We're covering all areas for the Games Village, from the Punaoa side coming to the dining area, in ensuring the safety of the athletes and to avoid any sicknesses from pests.

"Over the years, as we know, there have been diseases that have been carried around by mosquitoes.

"We are doing this to prevent any of these diseases."

The Games Village will be open from July 4 to 22, with a soft opening due to take place on July 3.