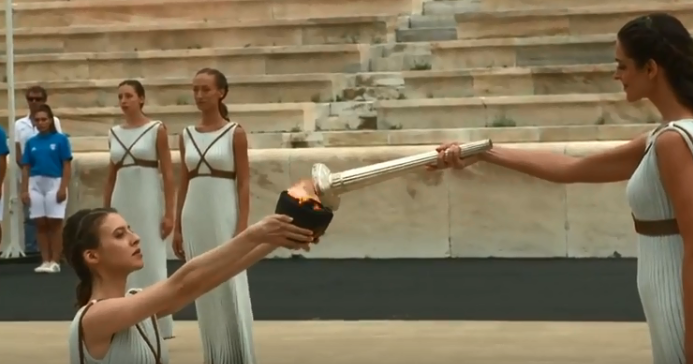 The flame for this year's Summer Youth Olympic Games in Buenos Aires has been lit in Athens - but the occasion was shortened as a mark of respect to those who have died in Greek wildfires.

A traditional ceremony was held at the Panathinaiko Stadium to kick-start the Torch Relay before the Games in Argentina's capital.

It was a sombre event, however, as dozens of people have been killed due to wildfires which have blazed in the Attica region around Athens.

Changes included the traditional Dance of the Priestesses not taking place.

The tragedy is said to be Greece's worst fire crisis in more than a decade.

"The ceremony was shorter than usual due to the deaths caused by wildfires outside Athens," a Buenos Aires 2018 statement said today.

"The Buenos Aires 2018 Organising Committee expressed its solidarity with the local authorities."

Tributes were also paid to those who have died during speeches.

Danka Bartekova, who chairs the International Olympic Committee's Coordination Commission for Buenos Aires 2018, said: "Tragic events are happening here in Greece and our hearts are with you.

"The Olympic flame is a symbol of peace, but today let me say that the flame becomes a symbol of hope not only for Greece to recover, but also for a generation of young people all over the world, not only those participating to the Youth Olympic Games Buenos Aires 2018."

The venue was the same stadium that witnessed the rise of the Modern Olympic Games in the Greek capital in 1896.

An actress playing the role of high priestess used a parabolic mirror to light the flame using the rays of the sun, organisers said.

After the flame was lit, a short Relay began in the stadium led by two Greek and two Argentinian athletes.

Valentina Muñoz and Yoel Vargas, who are South American youth cycling champions from the Youth Olympic host nation, were joined by compatriot and fellow rider Walter Perez, a gold medallist at the 2008 Olympic Games in Beijing.

"With pride we will bring it to the south of the planet and from there we will light up the world with the inspiring message of Olympism and its values.

"We are proud to be part of the Games.

"With them, the Olympic Movement is going to reach new horizons.

"We have the honour of organising the first edition of an Olympic competition with strict gender equality."

The Torch Relay will now last two months and cover 14,000 kilometres before the Opening Ceremony of the Games on October 6.

It will first arrive in Buenos Aires tomorrow, before being welcomed in an "official act" at the Youth Olympic Village.

The Relay will then travel through five regions in host country Argentina - Northwest, Northeast, Cuyo, Pampa and Patagonia.

The Games will close on October 18.