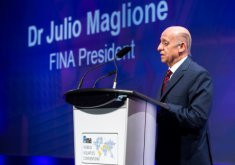 Swimming finals at the Tokyo 2020 Olympic Games are set to be held in the morning after the sport's worldwide governing body sided with the American networks in a dispute with Japanese broadcasters over the timing of gold medal races.

In a statement, the International Swimming Federation (FINA) Bureau said they "agreed with conducting swimming finals in the morning" following a meeting in Lausanne yesterday.

The competition schedule for Tokyo 2020 was approved by the International Olympic Committee (IOC) Executive Board but included gaps for swimming, diving and artistic swimming events because of the dispute.

American broadcasters, including NBC - which has a considerable influence in the scheduling of events after the company paid a sum of $7.65 billion (£5.9 billion/€6.6 billion) to the IOC for exclusive rights to broadcast all Summer and Winter Olympics until 2032 - have lobbied for swimming finals to be held in the morning Japanese time.

This is so viewers in the United States will be able to watch the action in prime-time.

But the support of FINA in the dispute could prove crucial in ongoing discussions taking place with broadcasters and the Organising Committee.

IOC sports director Kit McConnell claimed they were unable to finalise the complete Tokyo 2020 schedule as the FINA Bureau meeting, where talks were held on the timing of swimming finals, coincided with the Executive Board meeting here.

"There is always a balance of desires in terms of timing from different stakeholders," he said.

"Swimming also has an impact on the other disciplines in the Aquatics Centre and any changes to the swimming schedule has a knock-on effect on the other two.

"There is a little bit of a jigsaw to work through there but from our side there are no issues.

"As we know from previous Games like in Beijing and Rio, we do have to make some adjustments to the timings to balance the global audience."

Updates regarding the venues, transportation plan and accommodation at Tokyo 2020 were given at the Bureau meeting, where FINA also agreed to adopt their strategic plan for 2018 to 2021.

The FINA World Championships in Gwangju next year also featured on the agenda, along with approval of the calendar for the 2019 Diving World Series and Diving Grand Prix.