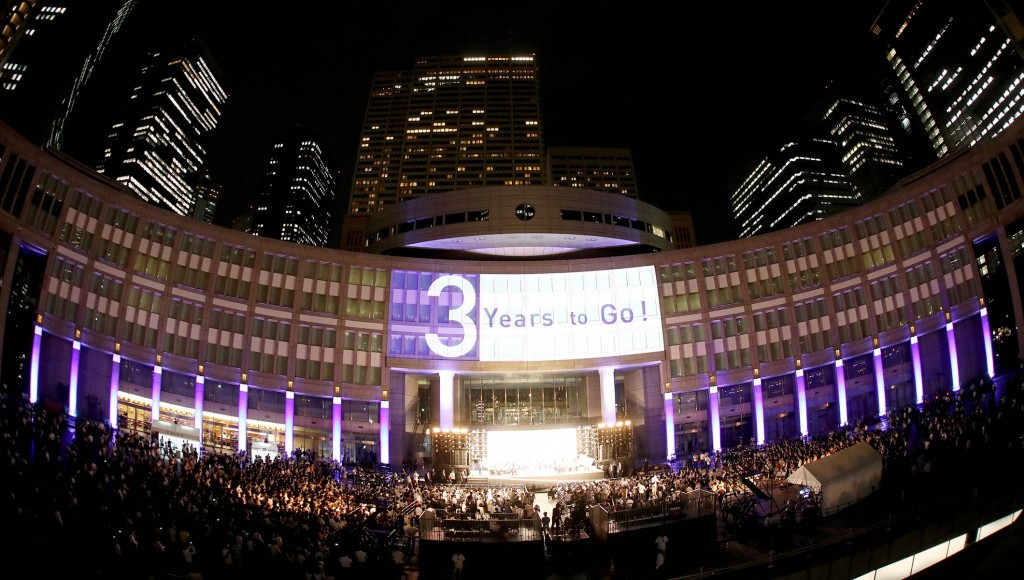 Numerous promotional events have been held across Japan today to mark three years to go until the Opening Ceremony of the Tokyo 2020 Olympic Games.

Runners and cyclists will travel through the areas devastated by the 2011 tsunami before reaching Tokyo on August 7.

Among other activities held were traditional dancing and surfing at Chiba prefecture’s Tsurigasaki Beach, the venue for the sport at Tokyo 2020.

In Tokyo, a concert and other festivities took place after dark.

"Six years on from the disaster, I felt our hearts are together," Takahashi was reported as saying by Kyodo News after running the first 1.7km.

"I hope we can all move forward."

Speaking at the opening of the event, Tokyo Governor Yuriko Koike said: "I want you to deliver hope.

"We want to continue to boost the mood for the 2020 Games over the next three years without getting out of breath."

Around 5,000 spectators joined Japanese Olympians and Paralympians and other guests at Tokyo’s Citizens’ Plaza in Shinjuku to celebrate the milestone.

This event was the prelude to the nationwide Tokyo 2020 flag tour, which aims to bring some of the excitement of the Tokyo 2020 Olympic and Paralympic Games to every corner of the country.

Since the Olympic and Paralympic flags were brought to Tokyo from 2016 host city Rio de Janeiro last year, they have been paraded through all cities, towns, wards and villages in the Tokyo Metropolitan area, prefectures affected by the 2011 tsunami and through the Kumamoto prefecture that was hit by a major earthquake in 2016.

Today’s event featured a newly-created projection mapping display, whereby a video light show was projected on to the facade of the Tokyo Metropolitan Assembly building, accompanied by music and showcasing the attractions of the host city.

Spectators, Olympians and Paralympians later battled each other in a computer game that was projected onto the huge screen.

The Central Government has also launched an annual "telework" day, encouraging more people to work at home in a bid to ease traffic congestion on the day the Olympics opens.

More than 900 businesses and organisations joined the initiative, which the Government plans to continue every year through to 2020.

The leader of the initiative, Internal Affairs and Communications Minister Sanae Takaichi, held an online conference today with officials of her Ministry and private company employees working at home.

The British politician, a member of the Conservatives, was in Tokyo to meet with Prime Minister Shinzo Abe, as well as Olympics Minister Tamayo Marukawa.

Johnson, who was the Mayor of London when the British capital hosted the Games in 2012, told Koike to ignore criticism during the build-up to the event.

Criticism has been aimed at Tokyo 2020’s budgeting but their efforts to decrease costs were praised by the International Olympic Committee last month.

"It’s also been three-and-a-half-years since the Tokyo 2020 Organising Committee was established.

"The Organising Committee started with just 44 staff members; now, the number has grown to over 1,200.

"Firstly, I’d like to express my gratitude towards all of our colleagues at the Organising Committee, as well as to the many other people at the various organisations who have devoted themselves to the preparations for the Games.

"Although there have been some bumps along the way, many of the challenges have been overcome.

"Overall preparation is well underway, and we have also successfully reached an agreement with related parties on general costs and role sharing."

"As there are only three years until Tokyo 2020, we have commenced the preparation of more intangible aspects of the Games - the mascots, the Torch Relay and the Opening and Closing Ceremonies.

"We have committees set up for each of those projects, with experts who represent Japan in those fields.

"We hope to show the best of Tokyo and Japan through the innovative initiatives that we are implementing in the lead up to what we believe will be the most exciting Games ever."

Mori went onto reveal some of the Organising Committee's future plans.

"We have produced these in the hope that many people all over the country will wear the Tokyo 2020 summer festival costumes and dance to the song.

"The common theme of these engagement initiatives this summer is 'Happy and Peace'.

"Through this, we are expressing the wish that many people, old and young, men and women, will dance and feel happy when the Tokyo Gorin Ondo 2020 song is played.

"A video will soon be available on our website, through which people can learn the song and the dance routine.

"We hope that people around the world can thus have a glimpse of Japanese culture.

"Today, as we enter the next stage of preparations, we are thrilled at the prospect of hosting the Olympic and Paralympic Games, and we remain committed to working hard so that in three years time we will be able to welcome our guests from around the world and deliver a most exciting summer festival."