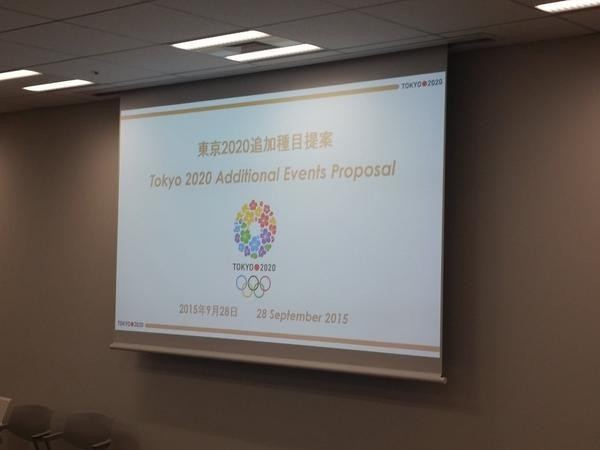 Baseball and softball, karate, roller sports, sport climbing and surfing have been recommended for inclusion on the Olympic programme at Tokyo 2020.

An announcement in the Japanese capital today proposed that 18 events are added to the Games' schedule in five years time, across the five successful sports.

Eight sports in total were in the frame for inclusion with bowling, squash and wushu missing out.

The International Olympic Committee (IOC) will now make a final decision on what will be included in Tokyo at their Session next year in 2016 Olympic host Rio de Janeiro.

It is unknown how many of the five sports will ultimately be selected.

The Tokyo Organising Committee, through its Additional Events Panel, has become the first to be given the chance to contribute to the Olympic schedule in this manner as part of the IOC's Agenda 2020 initiative.

"This package of events represents both traditional and emerging, youth-focused events, all of which are popular both in Japan and internationally," said a statement.

"They will serve as a driving force to further promote the Olympic Movement and its values, with a focus on youth appeal, and will add value to the Games by engaging the Japanese population and new audiences worldwide, reflecting the Tokyo 2020 Games vision."

It is proposed that baseball and softball, which were axed after Beijing 2008, will hold six team tournaments, with baseball squads numbering 24 and softball 15.

The suggestion for karate is for men's and women's kata, which will see ten men and ten women compete, as well as male and female kumite across three weight divisions which will add another 60 athletes.

Street and park skateboarding have been put forward as part of the roller sports bid, with 40 athletes split equally between men and women competing in each.

For sport climbing, bouldering and lead and speed combined are the selected disciplines, with 40 athletes proposed, while the suggested surfing disciplines are men's and women's shortboard, which would again feature 40 athletes.

In total, the five sports would add nearly 500 athletes to the programme if all are eventually selected by the IOC.

Out of the five sports, only baseball and softball have been part of the Olympic schedule before.

Twenty-six IOC-recognised International Federations originally applied for inclusion, and the remaining eight of these were shortlisted in June.

Fujio Mitarai, Chair of the Additional Event Panel, said: "Each of the eight shortlisted international federations amply demonstrated their potential to add to the value of the Games and I would like to take this opportunity to extend my sincere thanks to each of them for their outstanding efforts.

"We firmly believe that by connecting with youth, bringing to life Olympic Agenda 2020 and the Tokyo 2020 vision, our proposal constitutes the best possible package that will add the most value to the Games."

Reaction immediately began to spill in from the sporting federations involved.

"On behalf of WBSC and our athletes, I would like to thank Tokyo 2020 as well as IOC President Thomas Bach, whose Olympic Agenda 2020 vision has paved the way for this extraordinary opportunity.

"The entire baseball and softball world is excited and ready to cross the Olympic home plate.

"We will do everything possible so that baseball and softball, if included, are a great attraction and success for the Tokyo 2020 Olympic Games and IOC's Agenda 2020, as it remains WBSC's top priority to demonstrate that our sport aligns with the Olympic Movement and has the qualities to earn a place on the Olympic programme in 2020 and in future Games."

"The ISA has been riding an amazing wave in this journey for Olympic inclusion and we are thrilled that Tokyo 2020 recognise the exceptional value and youthful lifestyle that surfing can bring to the 2020 Games.

"We are deeply grateful to Tokyo 2020 and the IOC for providing us with this wonderful opportunity.

"We are immensely proud of our sport and what it would bring to the Games and we will continue to work closely with the Olympic Movement to achieve our Olympic dream.

“Surfing has incredible and growing global appeal, particularly amongst young people, and we believe that the dynamic energy of the sport and its fan base around the world would bring many benefits for Tokyo 2020 and the Games.

"Surfing embodies a cool, playful lifestyle that would add a completely new element to the programme, helping the Games reach new fans through live action and stunning broadcast opportunities.

“Today’s announcement gives us renewed drive and focus and we are looking forward to working closely with the IOC and Tokyo 2020 in the crucial months ahead to deliver the best possible solution to the IOC Session in Rio."

World Squash Federation President N Ramachandran. meanwhile, said he was "devastated" after the sport's latest attempt for recognition ended once again in failure.

"After our 12-year journey to join the Olympic Games programme, and the opportunity of a "second chance" after the heart-break of missing out in our first 2020 bid in Buenos Aires two years ago, I am utterly devastated on behalf of our great sport that our dream of taking part in the Tokyo Games cannot now be realised," he said.

"I don't believe we could have done more to get our message across to both the Tokyo 2020 Games hosts and the IOC of how squash could bring something special as an addition to the programme.

"I know I speak on behalf of the millions of squash players around the world for whom the opportunity of seeing their sport participate in the Olympics has been an absolute priority – and, like me, they will be heartbroken.

"However, this is not the end for squash.

"Our sport, played by vast numbers week in and week out, flourishes at every level from recreational to events around the world.

"We will go from strength to strength while we continue to target participation at a future date in the Games."

"WSF is pleased about the exciting and positive news coming out of Tokyo to include Skateboarding in the 2020 Olympics and we are hopeful that it will win final approval by the IOC next year," said its President Tim McFerran.

"WSF has been active around the world promoting and organizing skateboarding and highlighting the positives that skateboarding brings to communities."

Sabatino Aracu, FIRS President, said: "We know that the path is still long but we are confident that with our efforts the FIRS will bring great added value to Tokyo 2020 both in terms of youth participation and in terms of sponsors and media coverage.

"I am convinced that, thanks to the Games, the Roller movement will further develop Roller Sports not only in Japan but all over the world."

A World Karate Federation (WKF) statement read: "The WKF would like to thank the IOC for their proposal to include our sport of karate as an additional sport in the Tokyo 2020 Olympic Games Programme.

"This new opportunity that arises, which we hope will be a final one, as well as the dream of millions of karatekas worldwide, will nourish once again the work and efforts that have been made for many years from the WKF and its 190 member National Federations.

"This work shows that karate is a universal, young and dynamic sport with incontestable media interest, as demonstrated through the great request and broad TV coverage of TV channels at our World Championships.

"We trust that the IOC Session of August 2016 will ratify this proposal and that precisely Tokyo, the capital of the country of birth of karate, will be the entrance door of our sport to an Olympic Games."