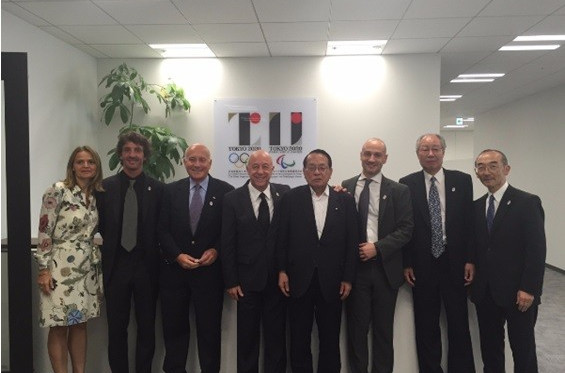 Skateboarding and inline speed skating were the two disciplines put forward for inclusion at Tokyo 2020 today by the International Federation of Roller Sports (FIRS) during a crucial presentation, insidethegames can reveal.

FIRS was one of eight sports who addressed the Tokyo's 2020 Additional Events Programme Panel in the Japanese capital today.

FIRS, however, appear be prepared to to use the sport’s popularity and the determination of the IOC to add it to the programme in order to help plead their case for inline speed skating, part of the World Games since their inception in 1981.

FIRS, which failed with a bid for inclusion at Rio 2016, losing out to golf and rugby sevens, refused to confirm which disciplines they had put forward for inclusion when contacted by insidethegames.

“We presented a complete project that in five years will lead roller sports to be an even more important sport in Japan and we are sure we can create a consistent legacy both before and after the Games,” FIRS President Sabatino Aracu said.

“We know that we have all it takes to contribute and make the Olympics more spectacular and appealing.”

Baseball and softball, widely considered the favourite to be included after it was axed following Beijing 2008, karate, squash, bowling, sport climbing, and wushu were the other sports to stake their claim.

They each made a 15-minute presentation followed by a 30-minute question and answer session, with a further 50-minute Q+A session planned for all of the eight sports tomorrow.

“The interviews consisted of a presentation given by each of the International Federations followed by a question and answer session,” Fujio Mitarai, chairman of the Tokyo's 2020 Additional Events Programme Panel, said.

“Each of the International Federations gave compelling presentations detailing why they should be selected as an additional event on the 2020 Olympic programme, and all the presentations were highly commendable.”

Greater transparency may have been touted as one of the main benefits of Agenda 2020, the IOC's strategic roadmap for the future of the Olympic Movement, but it was largely in short supply following the presentations of the eight sports.

Only the International Surfing Association (ISA) revealed details of the disciplines, confirming that traditional short board surfing and stand-up paddle boarding were those chosen to be put forward to the Panel.

Their plan also features either a man-made wave facility similar to Surf Snowdonia, an inland surf lagoon located in Wales, which opened at the beginning of the month, or a temporary construction to be located on one of the city’s beaches.

ISA President Fernando Aguirre claimed the wave park proposal showed how his organisation are thinking of the legacy including surfing might provide to Tokyo and the Olympic Games and hopes that will help influence Tokyo 2020 to add his sport to the programme.

“Building a new wave park will provide a substantial legacy for our sport and will encourage children across the country to get involved,” he said following surfing’s presentation.

“They are financially viable and they would provide a tremendous service to the sport and the local community.

“In the spirit of Agenda 2020, we have also proposed event plan options for Tokyo that are sustainable, innovative and flexible - either on ocean waves or in a state-of-the-art surf park - that will also help create long-term social, recreational and economic benefits in Tokyo and Japan.

Surfing’s proposal also revealed that they would include 120 athletes, featuring 60 men and 60 women competing across the two disciplines, with 74 in the traditional surfing event and 48 in the stand-up paddle competition.

Elsewhere, the World Squash Federation (WSF) continued their mantra of marketing themselves as a low-cost option during their presentation, with President N Ramachandran adding it will be "worth it" should they receive the green light.

"We were delighted to have a further opportunity to show the exciting journey of change and innovation that squash has been on," he said.

"Also to explain how we would be a low-cost addition with small athlete numbers.

"We have further scrutiny at a Q&A tomorrow, then can only hope we receive a nomination from the Tokyo Organising Committee to the IOC.

"It will be a hard wait, but if squash achieves the dream for our athletes it will be well worth it."