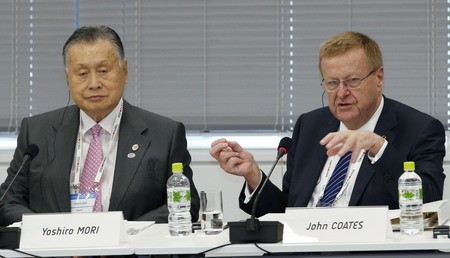 John Coates, the IOC vice-president who is chairing the body’s Coordination Commission for the Tokyo 2020 Olympics, made the disclosure in his opening remarks ahead of a day of meetings with top Games officials in the Japanese capital here today.

Coates said the intention was to change Rule 46 of the Charter, covering technical responsibilities of the IFs at the Olympic Games, “to reflect an increasing role for the Federations when it comes to running the events of the Games”.

He said he was “very excited that Tokyo will be the first opportunity for us to trial that”.

In wide-ranging comments, Coates spoke in terms of a “very, very positive report card” for Tokyo 2020 and said the team had shown professionalism “in every endeavour” over a year which has brought wide-ranging venue changes from the plan originally announced.

Tokyo 2020, he said, was delivering “a great service to Japan’s international reputation”.

While Tokyo 2020 had started with 85 per cent of planned venues within an eight-kilometre-wide circle centred on the Olympic Village, he emphasised that this figure remained at 66 per cent, notwithstanding all the changes.

At the same time, the project had moved from 33 per cent to 50 per cent use of existing venues – “that,” he said, “is the justification”.

He also emphasised that the IOC was “very, very pleased” to have been able to utilise a number of venues from the original Tokyo Games more than half a century ago.

Finally, he congratulated organisers on the commercial success of their domestic sponsorship programme; this gave a “wonderful indication of the support your Games is receiving not just from the Government, but the business  sector”.

Welcoming Toshiaki Endo, recently-appointed Minister in charge of the Tokyo 2020 Olympic and Paralympic Games, to the project, Coates said he knew from his experience of working on the Sydney 2000 event in his native Australia just how important having a Minister for the Olympic Games would be for the success of the venture.

Endo, for his part, spelled out three factors he viewed as critical to the success of the Games: legacy, a secure atmosphere and winning “as many medals as possible”.

In other announcements, Yoshiro Mori, Tokyo 2020 President, said the Japanese Government would be establishing a new sports agency to unite disparate existing bodies under a single umbrella.

Mori also served notice of an impending official announcement on July 7 regarding the ¥252 billion ($2.05 billion/£1.30 billion/€1.84 billion) National Stadium that will be the centrepiece of the Games.

Hakubun Shimomura, Education, Sports and Science Minister, said authorities were “in the process of the finalisation of negotiations with the constructor”.

Yoichi Masuzoe, Governor of Tokyo, emphasised the “diversity of humanity” and argued that the 1964 Olympics had been a “catalyst” for Japan’s post-war success.

As currently formulated, Rule 46 of the Olympic Charter states that the final decision regarding the schedule and daily timetable of events lies with the IOC Executive Board, while setting out a list of IF rights and responsibilities regarding technical arrangements at the Olympics.