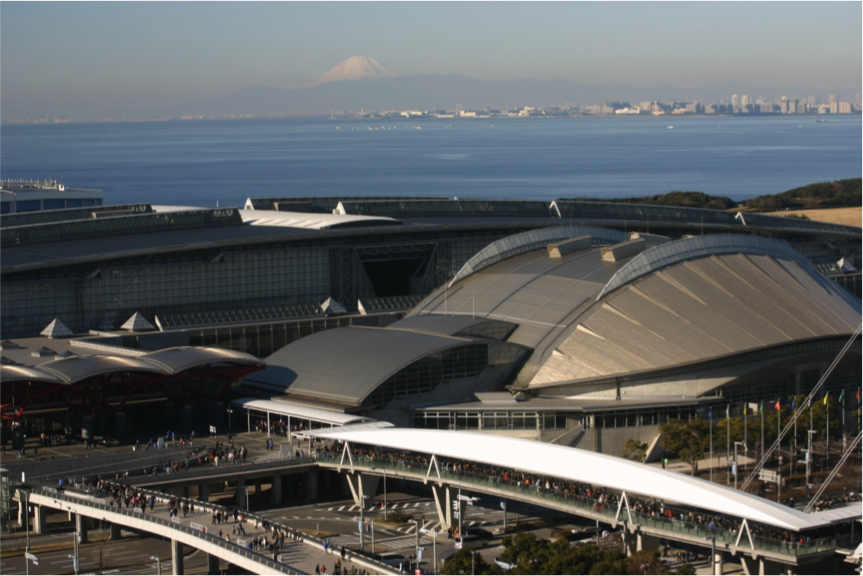 The convention centre recently chosen as the venue for three sports - fencing, taekwondo and wrestling - at the Tokyo 2020 Olympics is to benefit from an estimated ¥15 billion on(£80 million/$120 million/€110 million) facelift.

This disclosure was made today by Kensaku Morita, Governor of Chiba Prefecture, where the venue – Makuhari Messe – is located, after he had greeted members of the International Olympic Committee (IOC)’s Coordination Commission embarking on their second inspection tour of Tokyo 2020 facilities.

The centre - located about 40 minutes east of central Tokyo by public transport, beyond Ikea and the Tokyo Disney resort - opened in 1989.

As well as business events, such as the Tokyo Motor Show and major video game exhibitions, the venue has hosted concerts by both Kylie Minogue and Lady Gaga

The Chiba Marines baseball stadium is adjacent, while forthcoming events include the Bowling World Open and a Mega-Dinosaur exhibition.

Morita, a former action movie actor, indicated he had had no feedback about the facility from the IOC contingent; headed by Coordination Commission chairman John Coates and vice-chairman Alex Gilady, all, however, appeared to be in great good spirits following their visit.

Media were given access to the space that will be used for one of the three sports, a cavernous, but well-lit empty hall with light grey flooring and inconspicuous pillars.

The extensive coastal site utilises a split-level system, with pedestrian walkways on top and road traffic systems underneath.

Makuhari Messe was confirmed as a venue for the three sports earlier this month, as part of a series of changes expected to lop $1.7 billion (£1.1 billion/€1.5 billion) from the cost of the Games.

All three were displaced from the centrally-located Tokyo Big Sight halls as a consequence of a reconfiguration of the International Broadcasting Centre (IBC) that will be used for the Games.

Morita indicated the refurbishment would have been carried out with or without the Olympics coming to the venue.

He also revealed that he had recommended Chiba sake to his esteemed visitors - who also included United States IOC member Anita DeFrantz and Irena Szewinska, the Polish athlete who won a gold medal and two silvers at the 1964 Tokyo Olympics, but not Sebastian Coe, who is busy campaigning for the International Association of Athletics Federations Presidency – saying it was “very good”.

Two other Coordination Commission members, Lydia Nsekera and Francesco Ricci Bitti, new President of the SportAccord Convention, have not come to Tokyo on this occasion.