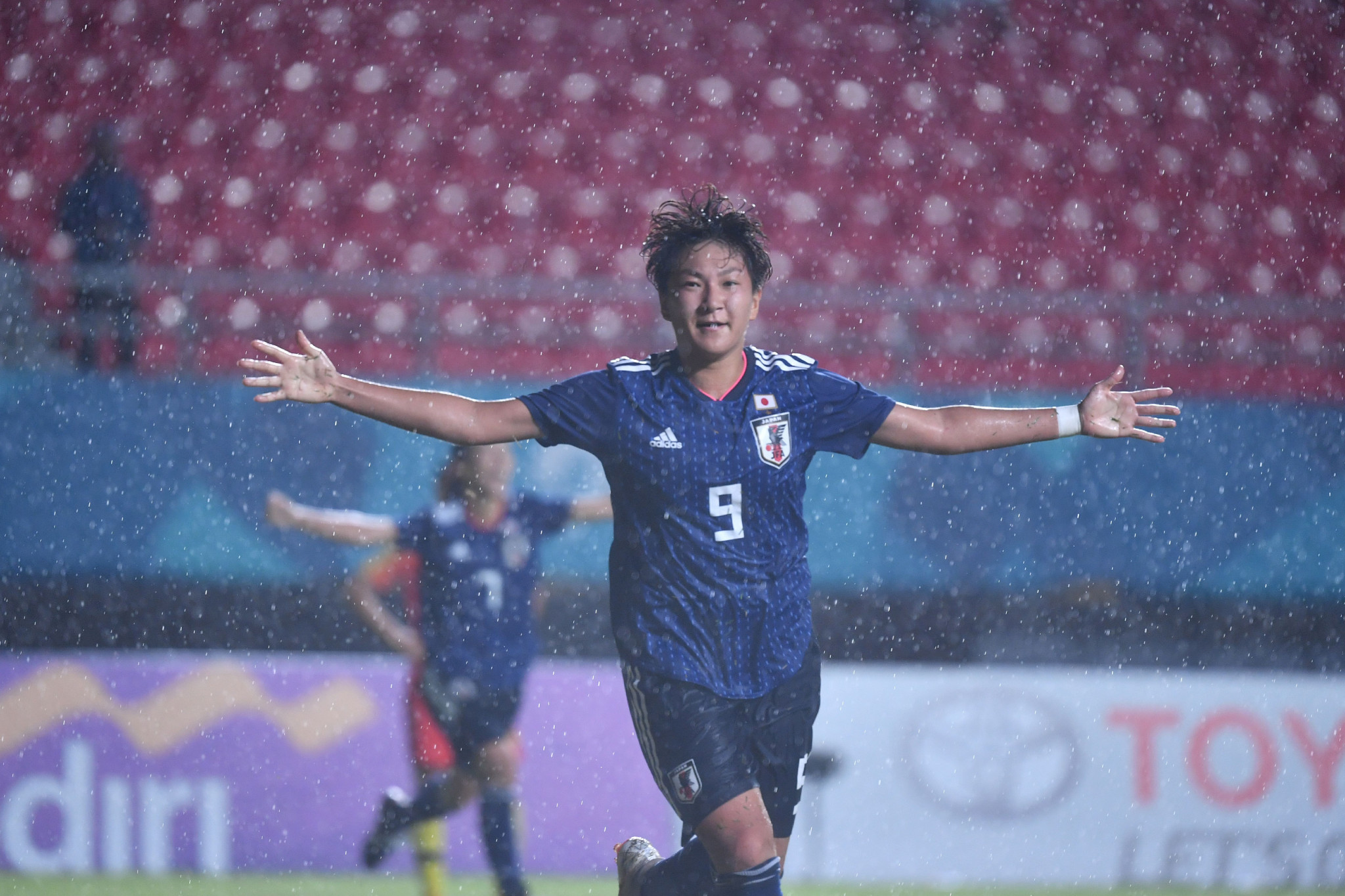 Sugasawa's glancing header beat China goalkeeper Zhao Lina after forward Mana Iwabuchi had delivered a right-wing cross with only 30 seconds on the clock at the Jakabaring Sport City Gelora Sriwijaya in Palembang.

It was former world champions Japan’s first and only attempt on target and meant they re-claimed the title they won for a first time at the 2010 edition of the Asian Games in Guangzhou.

China, winners of the three events from 1990 to 1998, dominated the first-half but failed to convert several chances in the pouring rain.

Wang Shanshan was adjudged to be offside as she put the ball into the net in the 20th minute, while Japan goalkeeper Ayaka Yamashita produced an excellent diving save to deny Gu Yasha with a quarter-of-an-hour remaining.

Japan fought back, however, and they nearly had a late penalty for a Wu Haiyan challenge on forward Emi Nakajima before the linesman flagged for offside.

It appeared as though extra-time was on the cards, but Sugasawa had other ideas and secured a memorable triumph for her country.

China had 14 shots to the four of Asian Cup champions Japan, who fulfilled their standing as favourites by going unbeaten throughout the tournament.

Qatar claimrf the gold medal in the men’s handball competition with a 32-27 win in extra-time over Bahrain to successfully defend the title they won at Incheon 2014.

Yousef Ali scored with just 13 seconds of regular time remaining to deny Bahrain victory and take the game into extra-time.

The Qataris opened up a gap by the end of the first additional period, reaching the interval leading 29-26, and they extended that in the second period to eventually prevail by a margin of five goals.

Earlier in the day, South Korea secured the bronze medal with a 24-23 win over Japan to take third place four years after finishing with the silver medal in Incheon.

Elsewhere, Macau’s Hoi Long brought the curtain down on her Asian Games adventure by capturing a bronze medal in the women’s triathlon.

Competing in her third and last Asian Games, the 34-year-old used every ounce of energy to secure a third-place finish.

After a steady 1.5 kilometres swim and 40km cycle left her in 10th place, Hoi went up a gear in the 10km run and battled her way through the field and onto the podium with an energy-sapping effort.

It was a fitting end to her Asian Games career after finishing fourth at Guangzhou 2010 and fifth at Incheon 2014.

She had already announced the 18th Asian Games would be her last.

Triathlon was one of numerous sports in which gold medals were won for the first time today along with the likes of roller skate, which saw Chinese Taipei claim victory in both the men’s and women's road 20km races.

The first gold medal was won in the men’s race by Chao Tsucheng, who clocked the fastest time of 33:51.418.

Chinese Taipei’s dominance was confirmed by success in the women's race with Li Mengchu recording an unrivalled time of 44:50.929.

In sailing, Malaysia celebrated their national Independence Day in grand style by winning five medals as well as securing two berths at the Tokyo 2020 Olympic Games.

Afendy, who finished a close second behind South Korea's Ha Jeemin, also secured himself a place at his third successive Olympics.

Ha had already qualified for the Olympics at this year’s World Championships, so Afendy was given the sole automatic spot on offer at the Asian Games.

Malaysia’s women won two bronze medals thanks to the performances of Nur Shazrin Mohamad Latif in the laser radial, and Nuraisyah Jamil and Norashikin Mohamad Sayed in the 470 class.

Mohamad Latif, 20, also booked her place at Tokyo 2020 by finishing second in today's 12th and final race to come third overall behind Japan’s Manami Doi and China’s Zhang Dongshuang, who had already qualified.

There were also gold medals awarded today in modern pentathlon and sambo.

Sambo was making its Asian Games debut today and it was Mongolia's Narantsetseg Ganbaatar who had the honour of winning the first-ever gold medal by beating compatriot Oidovchimed Baasansuren 3-0 in the women's under-48 kilograms final.

This was followed by success for Kazakhstan's Baglan Ibragim, who defeated Mongolia's Erdenebaatar Shaaluu 4-0 to claim the men's under-52kg gold medal.

In track cycling, Lee Wai Sze secured her second gold medal of Jakarta Palembang 2018 with victory over South Korea's Lee Hyejin in the final of the women’s sprint.

The Hong Kong athlete added the sprint crown to the one she claimed in the women’s keirin earlier in the week to take her career tally to five Asian Games gold medals since winning her first title in the 500 metres time trial at Guangzhou 2010.

It capped a medal-laden day for Hong Kong, with Cheung King Lok and Leung Chun Wing winning gold in the men’s madison and Pang Yao and Yang Qianyu taking silver in the women’s madison behind South Korea's An Seonjin and Kim Youri.

Thailand’s Jai Angsuthasawit powered to victory in the final event, the men’s keirin, when he finished ahead of Japan's Yudai Nittai and men’s sprint champion Mohd Azizulhasni Awang of Malaysia to take the gold medal.