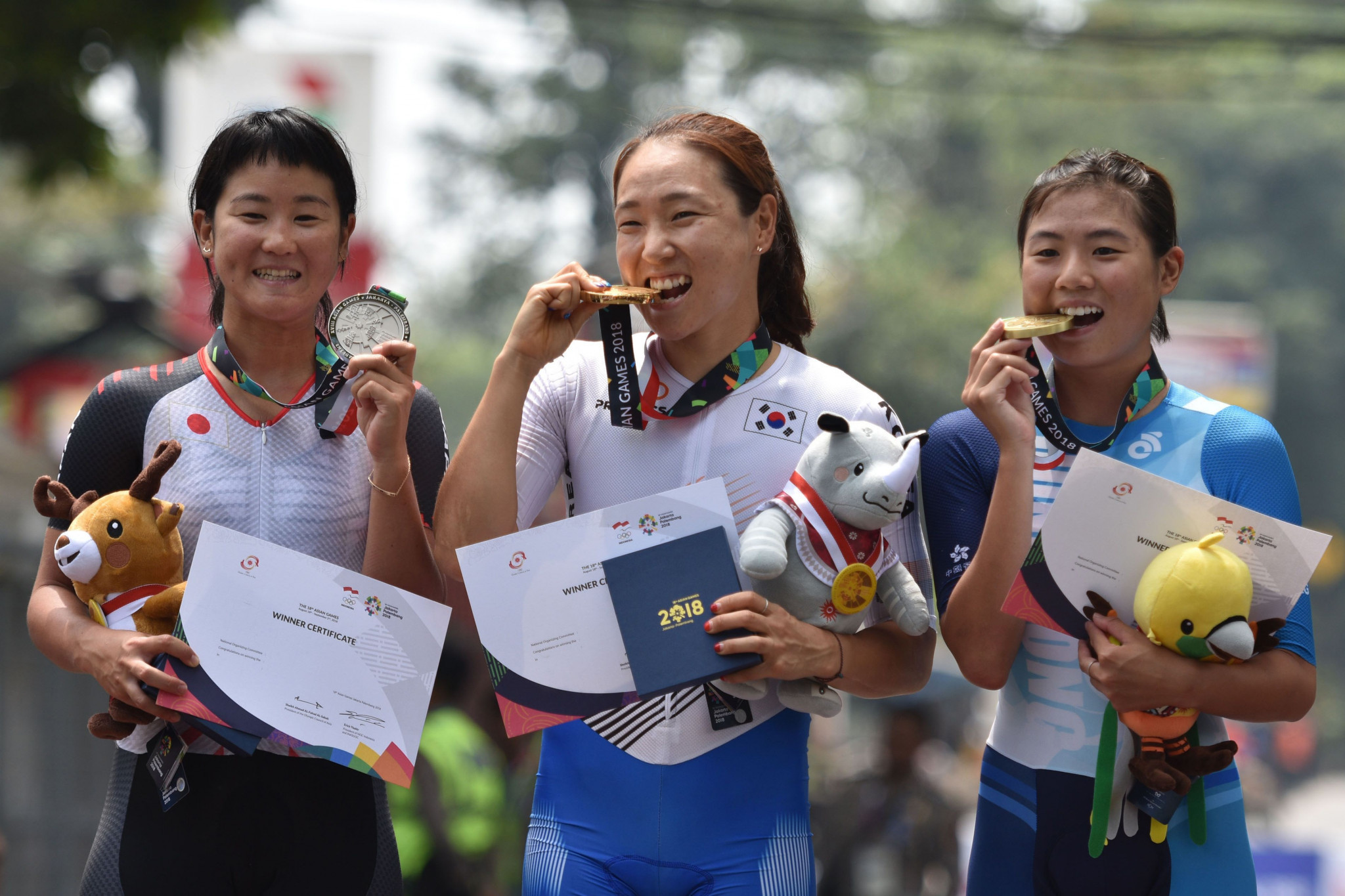 History was made at the 2018 Asian Games here today as Alexey Lutsenko of Kazakhstan and Na Ah-reum of South Korea won the men’s and women’s time trial respectively to complete an unprecedented road cycling double.

Prior to today’s action in West Java, no cyclists in the history of the Asian Games had won gold medals in both the road race and time trial at the same event.

In the space of five hours today, Lutsenko and Na both achieved the feat.

The women’s race was the first to go ahead, with everyone aware that a victory for Na would set the record.

Na finished the 18.7 kilometre route in 31min 57.10sec to achieve the goal, though it was far from easy.

The bronze was taken by Wing Yee Leung of Hong Kong, who finished significantly slower, another 2:35.05 behind Yonamine.

Lutsenko then entered the men’s race and did exactly the same, although his win came more comfortably.

Having already won the road race earlier this week by a hair, the Kazakh set the fastest time of 55:37.13 on the 40km route.

Thankfully for him, the time trial was not as close as the road race and he sealed his second gold by 1min :33.19secs.

Na and Lutsenko’s achievements were by no means the only impressive feats of the day, however.

Two kabaddi finals were contested today and Iran won both.

Their victory was especially memorable in the women’s event as they became the first country to beat India at the Asian Games.

Prior to today, India had won all nine previous golds on offer in kabaddi, across both the men’s and the women’s events, so they were the strong favourites.

Iran were desperate to avenge their defeat at the 2014 Games and they managed it with a 27-24 win, prompting wild celebrations from both the team and their supporters in the stands.

The men’s team then came out and sealed the double for their country at the Theatre Garuda.

Over at the Jakarta International Expo, Iraq won gold in the men’s 85 kilogram weightlifting final to claim their first medal of any kind at the 2018 Games.

Safaa Rashid Mohmood Aljumaili was crowned the Asian Games champion by completing a 202kg clean and jerk with the final lift of the competition.

His performance saw him beat South Korea’s Jang Yeonhak by just one kilogram.

Not only did she win but Ikee also set a Games record of 24.53secs, finishing 0.07 ahead of China’s Xiang Liu.

Not one to be upstaged, China’s Sun Yang then won his 14th Asian Games swimming medal during the final session of the Games by triumphing in his specialist event, the 1,500m freestyle.

The last swimming medal of the competition was also taken by China as they claimed victory in the men’s 4x100m medley relay.

Japan had qualified fasted for the race and they pushed their Chinese opponents all the way, but ultimately their best efforts were not enough.

In what was a classic race, which exemplified the Japan-China rivalry, the latter took the gold in a Games record of 3:29.99.

In a brutally-close ending, the Japanese finished just 0.04 seconds behind.

Elsewhere, the United Arab Emirates experienced perhaps their most successful day in the 67-year history of the Asian Games.

The Gulf state have now won six golds since the first event in 1951 and two of them came today.

The UAE took gold in the men’s under 56kg ju-jitsu thanks to Hamad Nawad, who claimed the medal by beating his compatriot Khalid Albooshi.

That marked the first time the country have finished first and second in the same event.

Ali Allanjawi then won the Games’ inaugural jet ski gold medal by topping the podium in the runabout limited, before the country’s men’s footballers knocked out hosts Indonesia in a thriller.

UAE went ahead twice in the match and were leading 2-1 with seconds of normal time remaining.

A brilliant goal from Indonesia in the dying moments sent the sell-out crowd delirious and took the match to extra time.

The UAE’s players were able to withstand any further pressure and eventually took the match on penalties 4-3 to seal their place in the quarter-finals.

China remain top of the medals table with 66 golds, 46 silvers and 27 bronze medals following the conclusion of day six.

Japan are second with 29 golds, 31 silvers and 43 bronzes, while South Korea are third with 23 golds, 26 silvers and 29 bronze medals.

You can see all our posts from throughout the day as the medals were won on our live blog here.