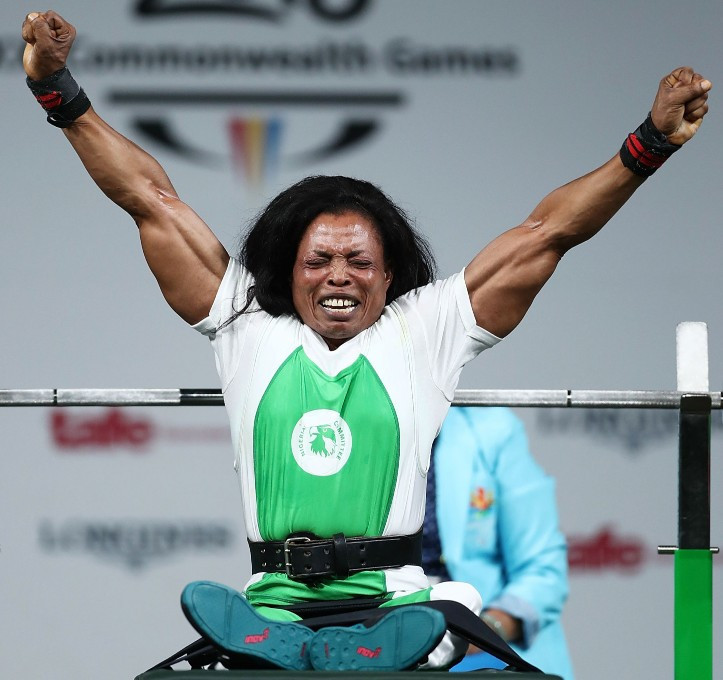 It was Super Green Eagles all the way here at the Carrara Sports Arena as Nigeria dominated the Gold Coast 2018 Para-powerlifting with all four gold medals and a new world record in the women's lightweight competition.

The record was set by the exuberant Esther Oyema who pressed 131 kilograms on her final lift to set her third world record in the sport for under-50 kg athletes.

Oyema had pressed 125kg in the first round and then called for 131kg.

She described her first failed attempt as a "silly mistake" and revealed she had offered advice to the officials who balance the weights.

"In powerlifting when they give you the weights, you have to balance," she said.

"There are different people and different ways of giving you the weights.

"So when I came back for the third I said 'please gentlemen do it like this'.

"Hold it very tight for me.

"Even if you have all the strength, you must have good technique.

"If you don't have good technique you will end up with zero.

"We have to be careful with our attempts and our technical work."

England's Zoe Newson lifted more than double her own bodyweight for bronze, 91kg.

There was a tremendous contest in the men's lightweight class where the top two positions from the Glasgow 2014 Commonwealth Games were reversed.

Roland Ezuruike lifted 188kg and followed up with 194kg to take gold.

The complex formula used to calculate results based on bodyweight gave him a score of 224.3.

"I do have a Masters degree but it is a game we know.

"We know how to make the calculations."

Paul Kehinde was champion four years ago but came into the competition weighing 62kg, giving his lighter rivals a significant advantage.

'It is very very hard for me to beat people with lower bodyweights," he said, after lifting 221kg which was not enough on the points system.

"I was able to adjust my bodyweight but you lose strength.

''I could not go home empty handed.

"I have a silver so they should be happy with me."

Bronze medallist Ali Jawad of England only returned to competition seven weeks ago after a relapse of Crohn's disease, and lifted 161kg.

"Just to make it on the field was a miracle and to perform like that this a bonus," he said.

"I had to think about the dark times.

"That is what got me through it, I was never supposed to make it and that is what drove me on."

Ndidi Owusu was a comfortable winner of the women's heavyweight category for lifters over 62kg.

Louise Sugden of England edged out the Kenyan Joyce Njguna for silver by 0.2 points, lifting a best of 103kg.

No bronze medal was rewarded as only four lifters took part.

Abdulazeez Ibrahim won the men's heavyweight class in front of of Malaysia's Yee Khie Jong, although both had best lifts of 220kg.

The real drama was in third where India's Sachin Chaudhary snatched bronze from Scotland's Michael Yule.

Chaudhary had two no-lifts despite a protest lodged by the Indian team.

His last attempt was successful at 201kg, as Yule's best was 174kg.

"It is a high level event so much high regard if you win a medal in the Commonwealth Games."