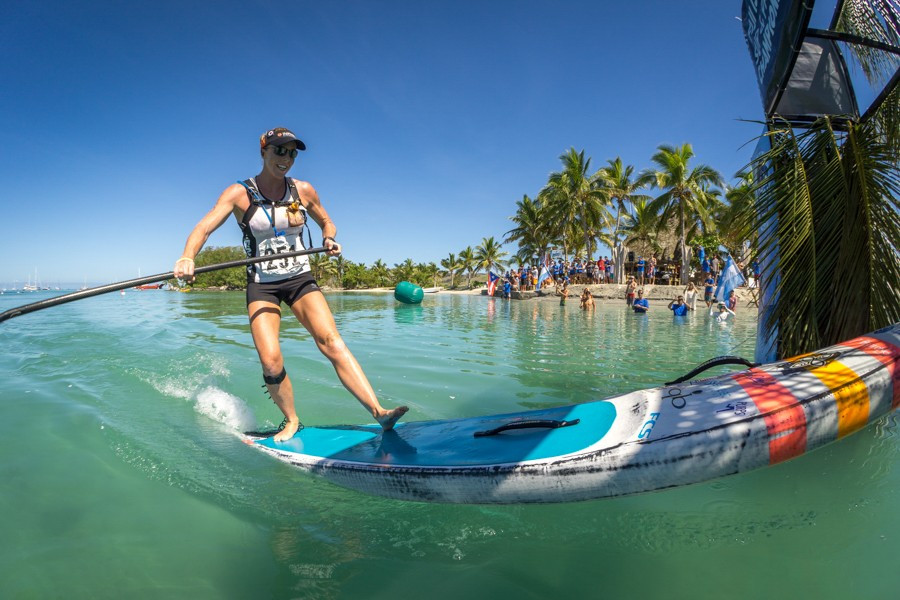 Candice Appleby of the United States successfully defended her SUP title from 2015, while Australia’s Harriet Brown was victorious in the paddleboard racing division, winning her second gold medal of the week following her technical race success.

The women’s SUP racers opened the day's action as they began at Cloudbreak first.

Appleby quickly found herself at the front of the pack and by the time she reached the island of Namotu, she had built roughly a 100 metre lead on her closest competitor, France’s Olivia Piana.

Appleby’s lead only continued to grow, however she nearly made a costly mistake as she lost track of the last buoy before Musket Cove.

Recognising her error, she corrected her course and appropriately rounded the buoy, crossing the finish line in 2 hours 2min 2.54sec in dominant fashion.

The American was followed by Piana in 2:04.32, who took silver, while Spaniard Laura Quetglas claimed bronze in a time of 2:07.02.

Slovenia’s 19-year-old Manca Notar finished fourth in 2:09.14 and secured the copper medal, the first ISA medal ever for a Slovenian athlete on her country's debut at an ISA event.

"It’s amazing to win gold for the second time in the distance race," said Appleby.

"It was a really hot course out there today with challenging conditions.

"Representing my country is like nothing I’ve ever experienced before."

Australia’s Brown and New Zealand’s Dannielle McKenzie, who took the silver in the technical race, set off at a blistering pace.

Both riders chose their own routes and remained neck and neck all the way to the final straight at Musket Cove, surpassing nearly the whole field despite starting the race a minute after them.

After an intense sprint in the final 100m, it was Brown who managed to build less than a board length lead to cross the line first in a time of 2:05.41.

Minutes after the leaders, the bronze and copper medals were claimed by France’s Flora Mancietand, who crossed the line in 2:19.06, and South Africa’s Anna Notten, who completed the course in 2:19.07.

"It was amazing having all the Aussies out there during the race as I was paddling," said Brown.

"I could hear them cheering for me and waving the flag.

"Danielle McKenzie and I are really good friends and we decided that we would pull away from the pack together.

"We worked in unison, but on that second to last buoy we stopped talking and knew it was going to be a sprint to the finish."

Brown’s gold medal, coupled with Michael Booth’s in the SUP men’s distance race yesterday, has propelled Australia into the lead in the team point standings with two days of competition remaining.

France and the US follow behind in second and third place respectively.

Action is due to resume tomorrow, the penultimate day of action, with the men's SUP surfing finals at Cloudbreak.