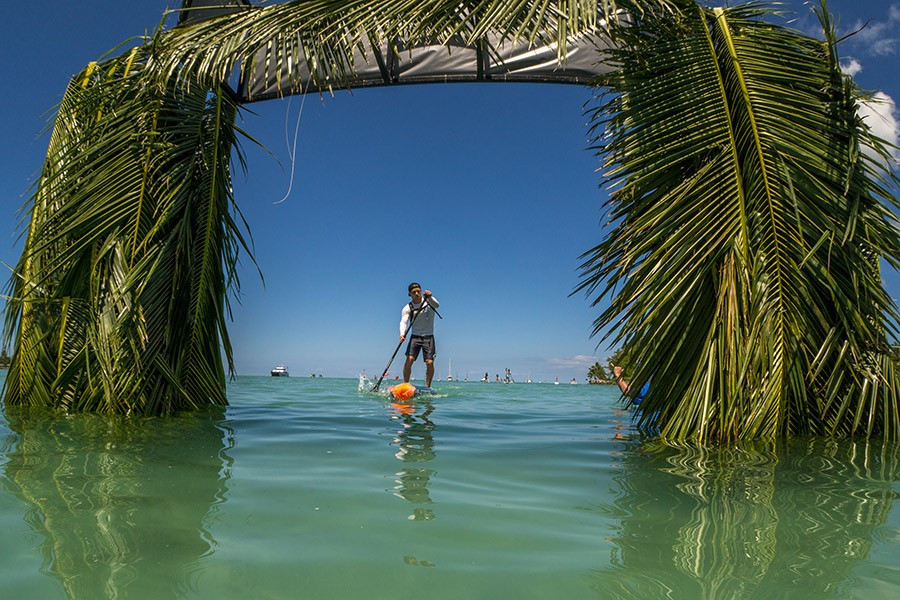 The men’s SUP race got today's action underway as the competitors raced around the heart-shaped island of Tavarua in difficult conditions of breezy cross winds and high temperatures.

After the opening stages of the race, a pack of seven quickly found themselves at the front of the group.

As the racers began to near Musket Cove, Booth pulled to the front of the pack and eventually began to extend his lead at the head of the race.

He then went on to hold his advantage all the way to the finish line, crossing exactly on the two-hour mark.

"The race was magic," said an elated Booth.

"I was really feeling uncomfortable at the start but when I came around the reef I pushed hard and pulled ahead.

"I really wanted this win, I love wearing the green and gold for my country.

"When I heard my teammates screaming for me from the boat that kicked me up that last little bit."

Following Booth in the SUP men’s distance race with the silver medal was France’s Titouan Puyo, who finished 15 seconds behind.

Immediately after, the men’s paddleboard distance race then took centre stage, following the same course of bouys between the islands of Tavarua and Namotu on the way to Musket Cove.

Four paddlers broke away from the main body of the race in the early stages, strategically conserving energy in the low wind conditions in the process.

Australia’s Lachie Lansdown, the defending champion, and Matt Poole were joined by American Jack Bark and Shergold at the front.

In the final stretch to Musket Cove they all made a move to win, engaging in a free-for-all sprint where New Zealand’s Shergold was able to find the energy necessary to cross the finish line first.

Australia’s Poole and Lansdown respectively followed with silver and bronze medals, while American Jack Bark fell off the pace and earned the copper.

"It’s pretty surreal, this is all still sinking in," said Shergold.

"It was a great battle the whole way and anyone could have won it off that last buoy.

"The design of the course was amazing and it required us to understand the water’s movements and race smart around the buoys."

Action is due to resume tomorrow where the women’s SUP and paddleboard distance races from Cloudbreak to Musket Cove take centre stage.