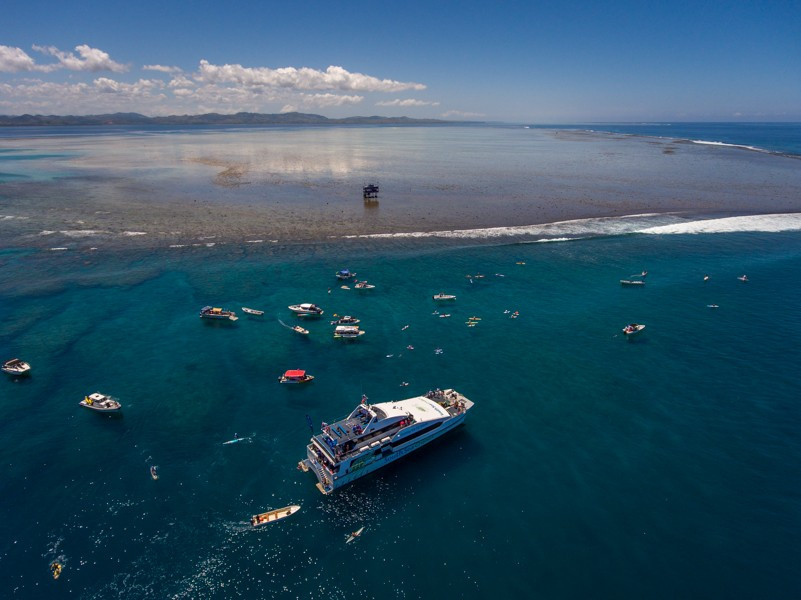 Surfers took to the water among the famous waves of Cloudbreak, a shallow and powerful reef located in the open Pacific Ocean off the Fijian island of Viti Levu.

Rounds one and two of the men's and women's main event were completed today with waves ranging from chest to head height.

In an explosive men’s second round heat, France’s Benoit Carpentier and Giorgio Gomez of the United States scored the third and fourth highest heat totals of the day with 16.44 and 15.97 points respectively.

Carpentier and Gomez both advanced while Puerto Rico’s Omelv Garcia and Spain’s Oscar Ruiz dropped into the repechage rounds.

Mexico’s Felipe Rodriguez was also in excellent form as he produced a round two heat total of 15.73 points to take first place and advance to the next round.

"It feels amazing to represent my country out at Cloudbreak," said Rodriguez.

"It’s my dream to be out here surfing with only a few guys.

"I am so happy to make it through the second round and advance in the competition."

In the women's competition, American Izzi Gome, the reigning women’s SUP gold medallist, competed in the first heat of the day and showed her superiority.

Gomez produced a heat total of 13.67 points, the second highest women’s total of the day.

Australia’s Shakira Westdorp notched the highest women’s score of round one of 14.17, but fell into the repechage competition in round two after finishing bottom of her heat.

"The competition is underway and the race for the gold medals is on," said ISA President Fernando Aguerre.

"The SUP surfers that took to the water today gave us a glimpse of the high level of talent and team camaraderie that they possess.

"All of the teams were out in the water supporting their surfers in the channel, creating an amazing energy that will only grow as the week progresses."

Action is due to continue tomorrow in the SUP divisions with both the main event and repechage draws maintaining centre stage.