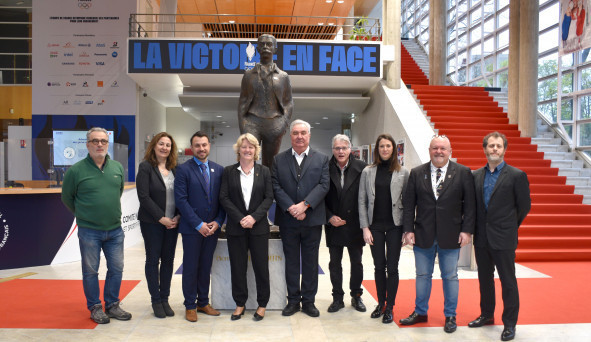 The French National Olympic and Sports Committee (CNOSF) have launched a "Club France de l'Olympisme," designed to bring together organisations concerned with the Olympics in France to take advantage of the opportunities created by Paris 2024.

The club has been given the backing of CNOSF President Brigitte Henriques.

"The legacy of the Games must also be that of the dissemination of Olympic culture and values," Henriques insisted.

The new club is designed to allow "joint actions aimed at disseminating and promoting Olympism in all its dimensions, and thus contributing to its societal ambition."

The Olympic Charter recommends that each National Olympic Committee "include in their activities the promotion of culture and arts in the fields of sport and Olympism."

Henriques was joined by Arnaud Richard, President of the French National Olympic Academy which is responsible for educational initiatives.

The new club is also supported by the Alice Milliat Foundation, an organisation which works for "the promotion and exposure of women’s sport."

This was set up to reflect the work of Alice Milliat, a sporting pioneer in the early years of the 20th century who established athletic events for women where none existed.

French Olympic collectors are also part of the new organisation.

The Pierre de Coubertin Committee, which keeps alive the work of the Frenchman, who was the driving force in reviving the Olympic Games, has also signed up for the new club.

Because of de Coubertin’s influence, the French have always had a special place in the Olympic Movement and French is still the official first language of the Olympic Games.

The CNOSF has also created a new "Culture and Olympism" service which will support its cultural policy.

This will be concerned with the sports movement and its ecosystem and also be a service for the general public.