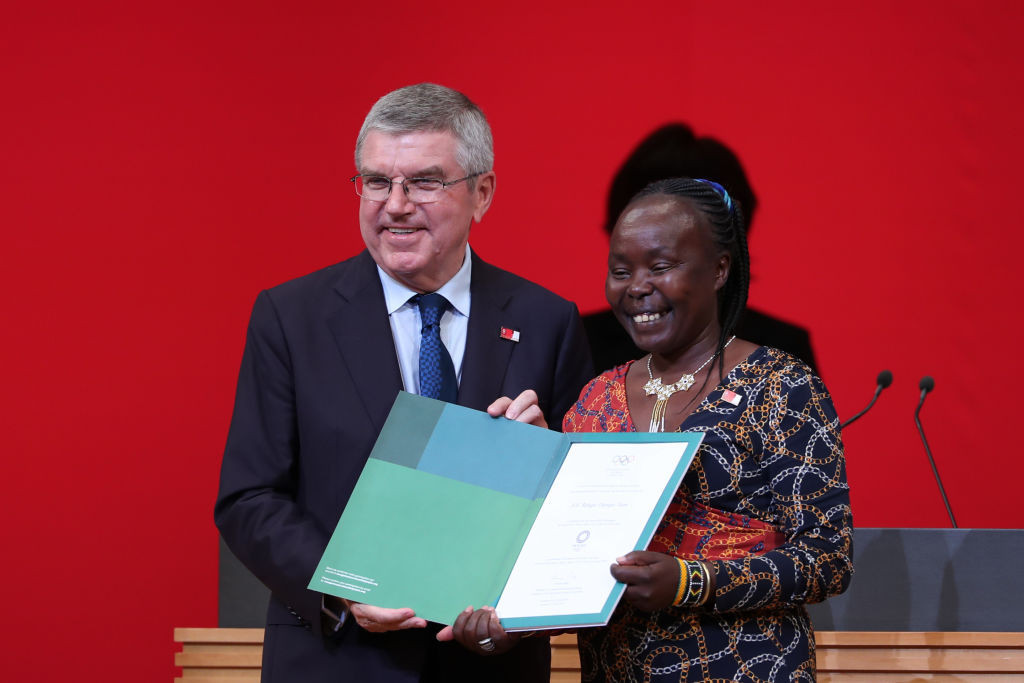 Refugee Olympic Team (EOR) Chef de Mission Tegla Loroupe could miss the chance to lead the squad at the delayed Olympic Games here as she is still in Doha after testing positive for COVID-19.

Senior International Olympic Committee (IOC) official James Macleod revealed the organisation was "discussing the next steps" with Loroupe, the long-distance track and road runner who spearheaded the team when it made its Olympic debut at Rio 2016.

Loroupe's positive test for COVID-19 came during the EOR's pre-Tokyo 2020 camp in Doha, which delayed the team's arrival for the postponed Olympic Games here.

The rest of the 29-strong squad made it in time for the Games, but Loroupe remains in the Qatari capital.

"Tegla is still in Doha, but she is doing well," Macleod, the IOC's director of NOC relations and Olympic Solidarity, said.

"We will be discussing the next steps with her in the next couple of days."

Tokyo 2020 today confirmed another seven new positive COVID-19 cases among people accredited for the Games in Japan since July 1, bringing the total in that period to 160.

Two are athletes residing in the Olympic Village, including Dutch table tennis player Jean-Julien Rojer, whose case was announced yesterday.

Rojer, the second Dutch athlete to test positive for COVID-19 after competing at the Games, and doubles partner Wesley Koolhof were forced to withdraw from the tournament yesterday following confirmation of his positive test.

They had beaten Sander Gille and Joran Vliegen of Belgium in their opening round and the eighth seeds had been due to face Marcus Daniell and Michael Venus of New Zealand.

There are now six confirmed COVID-19 cases in the Dutch delegation at the Games.

The identity of the other athlete to test positive at the Village has not been revealed.

At least 18 athletes have tested positive for COVID-19 since arriving in the Japanese capital for the Olympics.

Two of the other new cases revealed by organisers today came from "Games-connected personnel" - which includes groups such as team officials and coaches - who are staying at the Village.

There have now been 20 confirmed COVID-19 cases among people in the Village.

Nearly 240,000 screening tests have been conducted on Olympic participants between July 1 and 25 and the positivity rate is 0.02 per cent, the IOC said today.

Tokyo yesterday recorded 1,429 new COVID-19 cases, nearly double last week’s figure and the most ever for a Monday.

It was the seventh consecutive day where more than 1,000 infections were reported in the Japanese capital.

Health experts had claimed the Games could become a "super-spreader" event, while organisers have faced criticism over the rules in place at the event from members of the Japanese Government's COVID-19 advisory panel.

The IOC has warned action will be taken against those found guilty of "blatant" breaches of the regulations.

Athletes and other Olympic participants have been threatened with temporary exclusion from the Games or even disqualification if they continue to break the rules.