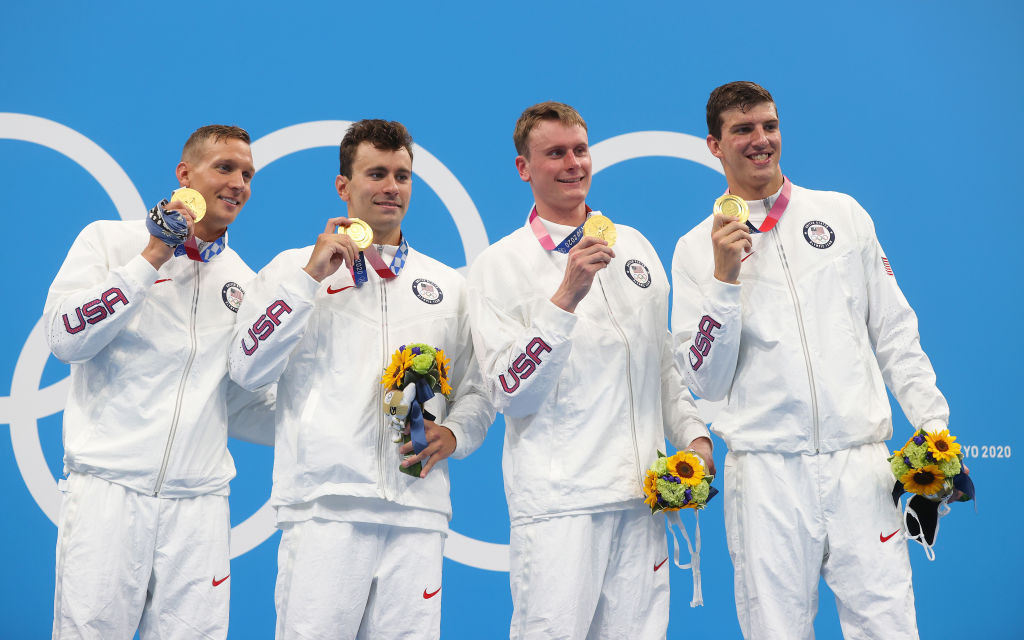 The IOC yesterday relaxed rules to allow athletes to remove their masks for 30 seconds to take a socially-distanced picture, but said regulations which forbid them from gathering on the gold-medal platform, apart from when the photo is taken, would remain in place.

Several athletes have been spotted without their masks for longer than the stipulated time, while others have not adhered to the rules at all on podium pictures.

Coaches and support staff have also been found to have been in breach of the COVID-19 measures outlined in the "playbooks" that are in place at Tokyo 2020 by cheering and shouting from the stands, and by hugging each other.

IOC Presidential spokesperson Mark Adams conceded not everybody at the Games had been abiding by the rules and admitted the new regulations allowing for maskless podium pictures would need to be reinforced.

"We cannot allow celebrations, unfortunately, but we can allow athletes the chance to remove their masks for 30 seconds and take a distanced picture," Adams said.

"I think everyone will appreciate the risk with this is very, very low.

"[The new rule] is not being followed.

"Those guidelines were sent during the day and we are trying to make sure they are being closely followed.

"Is everyone following the rules?

"It is difficult, but it is really really important that they do.

"We are making a really special effort today to remind all of our groups and all stakeholders that they need to wear their masks.

"At this stage, where the vast majority of people are complying, we will make a last big push to remind people to follow the rules and do their duty.

"There will be specific discussions if we find people who have broken the rules."

The IOC had previously warned action would be taken against "blatant" breaches of the regulations.

Athletes and other Olympic participants have been threatened with temporary exclusion from the Games or even disqualification if they continue to break the rules.

There have been reports in the Japanese media about accredited people breaking the rules by visiting bars and restaurants in tourist areas, leading to a clampdown on participants involved in the Games.

Organisers today reported another 16 confirmed COVID-19 cases in Japan since July 1 among people accredited for the Games, bringing the total in that period to 153.

Three are athletes not residing in the Olympic Village, while another is a "Games-connected personnel" who is staying at the facility.

Tokyo is under a state of emergency until at least August 22 because of fears over rising COVID-19 cases, which led to the Japanese Government banning spectators from all Olympic events in the capital.