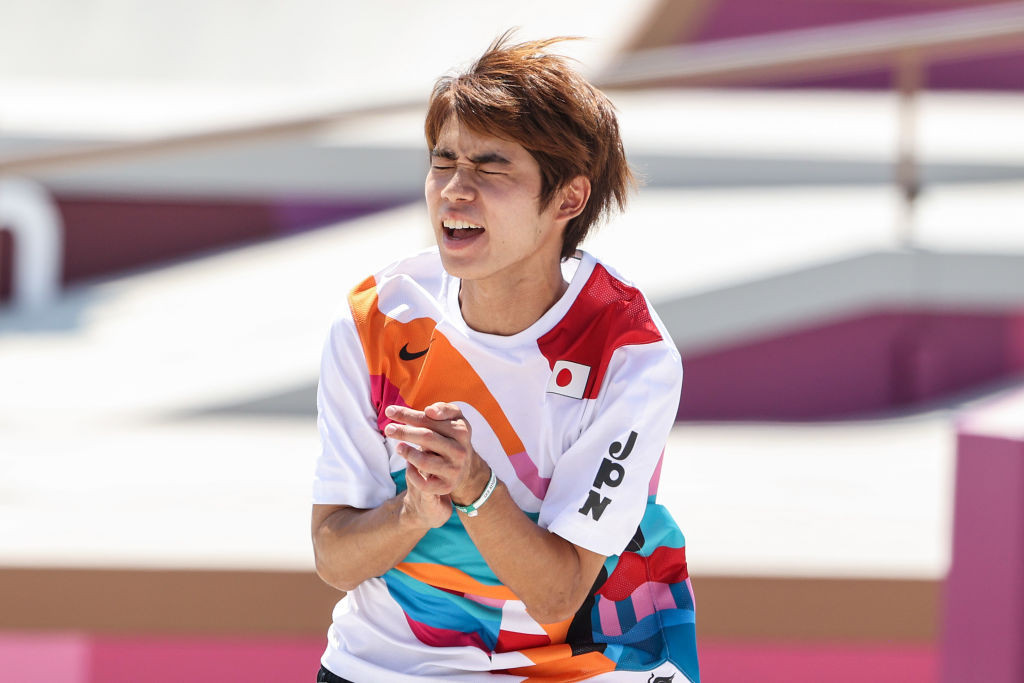 The 22-year-old world champion recovered from an uncertain start in the men’s street final, growing in assurance with a succession of high-scoring tricks to claim victory with a score of 37.18 points.

Horigome spoke of his emotions after competing in familiar territory.

"This Olympics is so special for me," Horigome said.

"Because I was born in Koto City, this is my hometown.

"And the Olympics is happening in Koto City.

"I’m so happy to be here - I still cannot believe I am in the Olympics right now."

Brazil’s early leader Kelvin Hoefler took the silver medal on 36.15 points, with bronze going to Jagger Eaton of the United States on 35.35.

Eaton’s team-mate Nyjah Huston, the sport’s iconic figure, finished seventh in the eight-man final on 26.10, failing to record a score for his final four tricks after making a strong start.

After Huston, who has fistfuls of world and X Games titles at the age of 26, hit the deck for a third time running he smiled ruefully and lifted off his white hat, waving it in the air.

It was a valedictory gesture.

Today, the big Olympic day, was not to be his.

Horigome had qualified sixth of the eight finalists and stood only fifth after the two opening runs of the final had been completed.

His fortunes rose, as did he, after registering 9.03 points for the first of his five tricks, and although he hit the deck on trick two the Koto City local, whose boyish hairstyle makes him look younger than his years, showed he has guts as well as precise technical ability as he finished with efforts earning 9.35, 9.50 and 9.30 points

After the first of them he looked relieved.

After the last, overjoyed.

Hoefler had looked the most relaxed competitor on show in the early part of the final, and although he was overhauled by his Japanese rival he finished with a flourish of 9.34 points to claim a richly deserved silver.

Eaton’s bronze was reward for a day of consistent excellence after he had finished second top in qualifying.

Speaking after his final, emotional bronze medallist Eaton revealed the extent of an ankle injury he had been carrying.

"It’s a huge accomplishment for me and a goal I’ve had since I was a kid growing up.

"Seven or eight years of work went into this.

"I only knew the [Olympic] dream about three years ago -  dreamed of just making it.

"I competed in my last contest to make it here on a broken ankle.

"I’m taking medication right now to get me through this pain.

"And the fact I just got on the podium with these boys here who I respect and care about so much, it’s an amazing situation."

Speaking before the final, Huston had acknowledged that the occasion - and the sweltering conditions - were uniquely challenging.

"It really makes a difference," he said.

"Your feet start burning out, it feels kinda crazy.

"It gets so hot that your board kinda flexes - it's not easy.

"I've been skating pro-contests for 15 years now but there's Street League, X Games, but if you compare that to the Olympics there's no comparison.

"I feel the pressure from the Olympics but also I feel a lot of pressure just from all my friends and homies and everyone from the USA.

"Because we've never skated for our countries before, and that means to me a lot.

"It's an extra motivation but also more pressure."