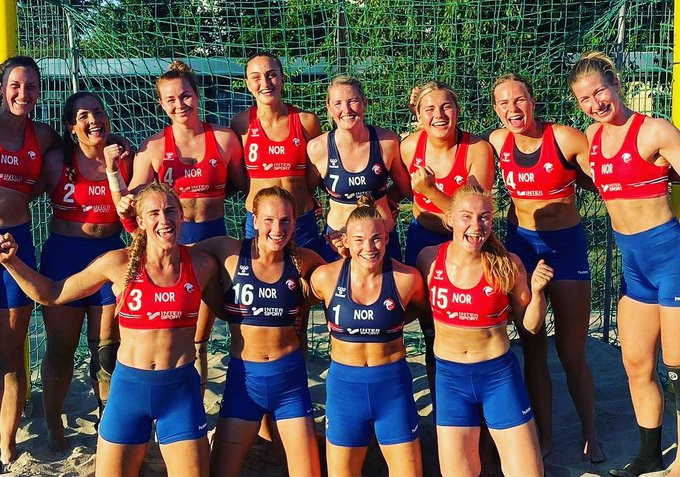 The European Handball Federation (EHF) says the controversy over the decision to fine Norway after its players wore shorts instead of bikini bottoms "is based on disinformation on the procedure."

A fine of €1,500 (£1,300/$1,760) was issued after Norwegian players wore shorts in the bronze medal match at the Women’s European Beach Handball Championships in Varna in Bulgaria against Spain on Sunday (July 18).

However, the EHF says it has been in contact with the International Handball Federation (IHF) and has issued a statement regarding the decision.

It said the matter was discussed at the EHF Congress in April 2021 after a motion was tabled by the Norwegian Handball Federation (NHF).

It was decided the Beach Handball Commission would meet in August and welcome suggestions to be presented to the IHF.

The EHF added any motion regarding the worldwide regulations needs to be resolved by the IHF Council and that the NHF had not taken this step since April.

Michael Wiederer, President of the EHF and his IHF counterpart Dr Hassan Moustafa have discussed the matter.

The EHF said it recognised the position of the players and steps will be taken to resolve the issue of clothing regulations.

"All efforts will be taken in order to further promote the sport," a statement read.

"From a European perspective, the reaction is based on disinformation on the procedure.

"The position of the players involved is acknowledged and further steps, in close coordination with the IHF, are in motion."

The fine has been subject to much criticism, including from Abid Raja, the Norwegian Minister for Culture and Sports, who described it as "completely ridiculous" on Twitter and called for changes in attitude in the governance of sport.

The (NHF) described the regulations which state bikini bottoms must be "not more than 10 centimetres on the sides" as "embarrassing," and had wanted its players to compete in shorts for the duration of the tournament.

However it complied with the regulations until the bronze medal match, and team manager Siv Øye Carlsen said it informed the EHF of its plans in advance of Norway's final game of the tournament.

The NHF plans to pay the fine on behalf of its players and also tweeted it was "very proud" of its team.

Kåre Geir Lio, the President of the NHF, told Norwegian broadcaster NRK it had the support of Sweden, Denmark and France in seeking to approach the EHF to bring about changes in the regulations.