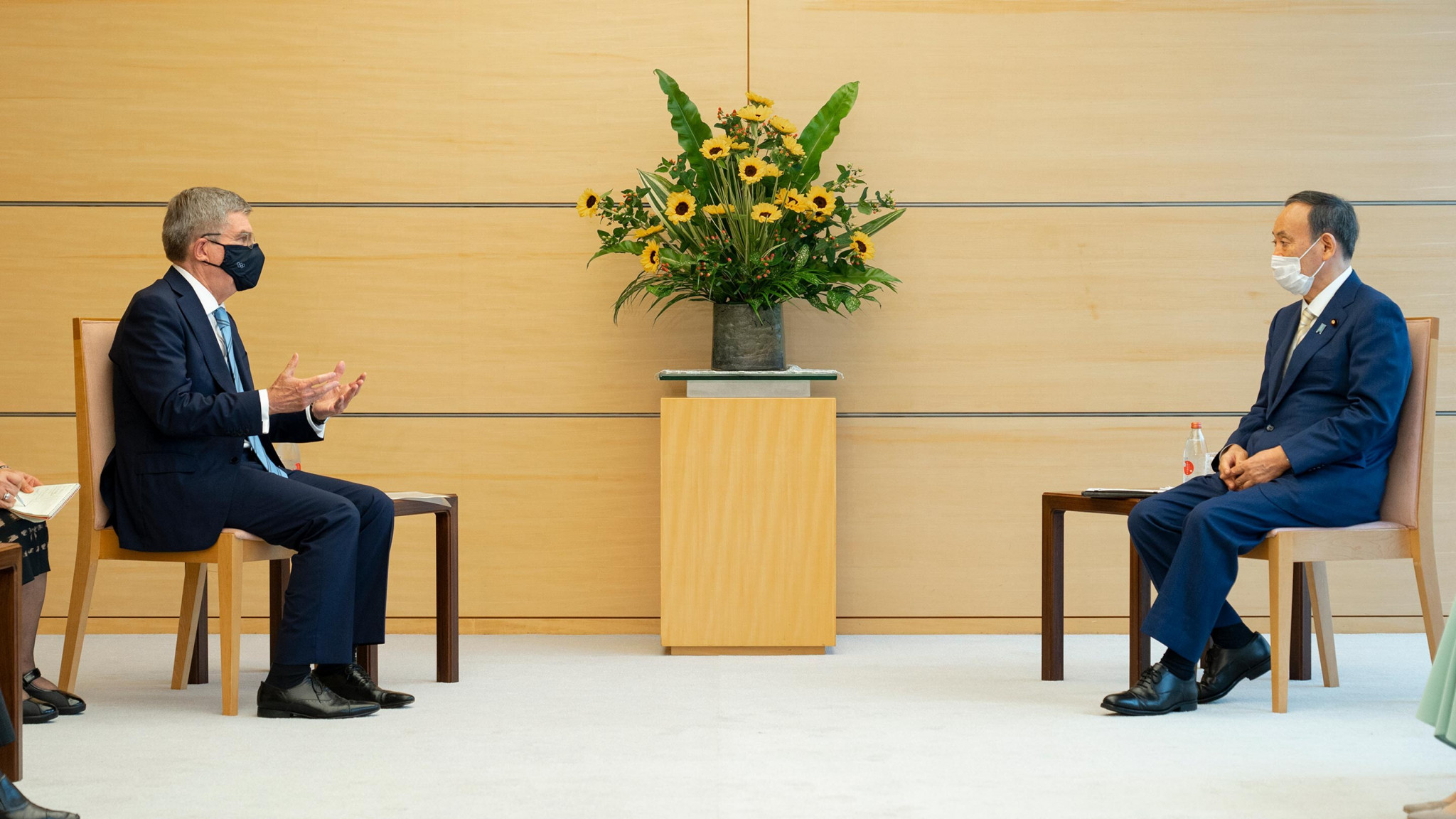 International Olympic Committee (IOC) President Thomas Bach has admitted he had doubts "every day" that the delayed Olympic Games would take place here following the decision to postpone the event by a year due to the COVID-19 pandemic.

Speaking in an online media roundtable, Bach claimed he had been unable to communicate his personal concerns over the fate of Tokyo 2020 in the months since the postponement to 2021 was announced because he did not want to add to the "uncertainty" surrounding the Games.

There have been frequent calls for the Games, due to open on July 23, to be cancelled or postponed again from a sceptical Japanese public, but Bach said that had never been an option as the IOC "is not abandoning the athletes".

Bach today met with Japanese Prime Minister Yoshihide Suga, who urged the IOC to ensure COVID-19 countermeasures are enforced among athletes and staff during the Games.

"To gain the understanding of our people, and also for the success of the Tokyo 2020 Games, it is absolutely necessary that all participants take appropriate actions and measures including countermeasures against the pandemic," Suga told Bach.

"As the host of the Games, I do hope that the IOC will make the efforts so that all athletes and stakeholders will fully comply with these measures."

The meeting came as Tokyo reported 1,149 cases of COVID-19, the highest figure in the capital since mid-January.

In response, Bach promised the IOC and the Olympic Movement would "do everything not to bring any risks to the Japanese people".

A fourth state of emergency in Tokyo was declared last week because of the spike in infections in the capital, which led to spectators being banned from almost every Olympic venue at Tokyo 2020.

The German also insisted the easiest option for the IOC would have been to cancel the Games, which he promised would be "historic", despite a cluster of COVID-19 cases around the event.

An official in the Refugee Olympic Team delegation and seven staff at a hotel housing 31 Brazilian athletes have tested positive for COVID-19.

"If we would have thought about the Games from a commercial point of view, or from the workload we have, the easiest would have been to cancel, draw on the insurance we had at the time for the cancellation and start preparing for Paris," Bach said.

"This was never really an option because the IOC is not abandoning the athletes, therefore we decided not to draw on the insurance but to invest more money so that the postponed Games can take place.

"We can confidently say we have minimised the risk as much as we could.

"In these 16 months, we had doubts every day.

"We could not know fully what this would mean and how complex this would prove to be.

"It was way more complex than we thought it would be when we agreed on this postponement and there was uncertainty all the way through.

"The real challenge on a personal note was that you could not speak about this, because everybody was uncertain.

"The IOC as the leader of the Movement would have added to the uncertainty - this could or would have been a self-fulfilling prophecy.

"How can you convince an athlete to keep training, to go to the next qualification event...if you do not show confidence?"

The IOC and organisers have faced a constant stream of local opposition to the Games, the latest coming in a poll from market researches Ipsos, which revealed more than three-quarters of Japanese respondents believe the Games should not go ahead because of the pandemic.

Criticism of Bach has intensified since he touched down in Japan last week, and yesterday he caused controversy by accidentally referring to the Japanese people as "Chinese people".

Although he swiftly corrected his comment, the German official received a backlash on social media in Japan.

"We are trying to address the concerns," Bach said.

"We always knew there was scepticism among the population and that there are very special circumstances about which the population is concerned and which transferred to the Olympic Games.

"We take this seriously but in such a situation, and with such a project as the Olympics, it is normal that there are different opinions.

"We are very confident that once the Japanese people realise that we have done everything to minimise the risk as much as we could, and when the athletes finally compete, that this will be well appreciated here."