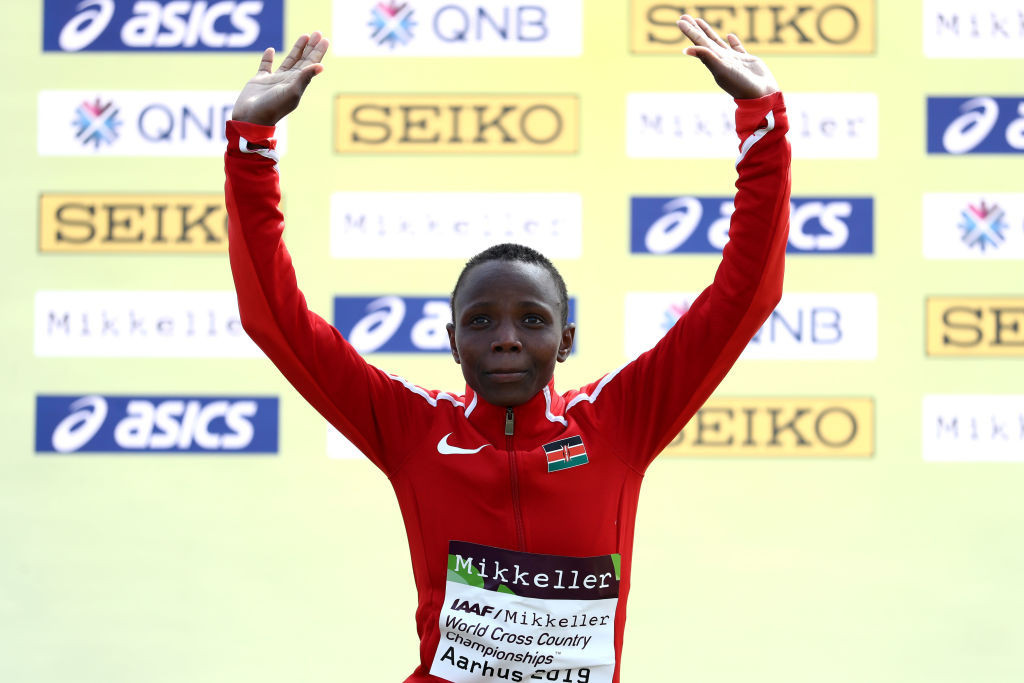 Twenty-one-year-old Kenyan Beatrice Chebet produced an outstanding performance at the second Wanda Diamond League meeting of the season in Doha as she defeated a field of world class talents to win the women’s 3,000 metres in the fastest time of the year.

Chebet, who took the under-20 World Cross-Country title in Aarhus in 2019, offered further evidence of her high talents as she won the women’s 3,000m in a personal best of 8min 27.49sec - her first Diamond League victory.

Kenya’s world 5,000m silver medallist Margaret Chelimo Kipkemboi was second in 8:28.27, with compatriot Hellen Obiri, the world champion and Olympic silver medallist at 5,000m, fourth in 8:33.98 after fading over the final lap.

Meanwhile on a highly successful night for Kenyan runners world 1500 metres champion Timothy Cheruiyot laid down a marker for his Tokyo 2020 Olympics defence as he won in 3:30.48, the fastest time in the world this year.

The fastest woman in the world this season over 100m, Sha’Carri Richardson, failed to make the start list in Doha, reportedly suffering from cramps following her second-placing in the wind and rain of Gateshead’s opening Diamond League meeting behind Britain’s world 200m champion Dina Asher-Smith.

In the American’s absence the race went to the 34-year-old Jamaican double Olympic champion who won the world title on the same track, Shelly-Ann Fraser-Pryce, who clocked a season’s best of 10.84.

Nigeria’s Blessing Okagbare was second in 10.90, also a season’s best, with third place going to Javianne Oliver of the United States in 11.03.

Rai Benjamin of the United States, in the stadium where he won 400m hurdles world silver in 2019, set a meeting record of 47.38 in beating a world class field that included the man who took bronze behind him on that occasion home athlete Abderrahman Samba.

The Qatari athlete was fourth in a season’s best of 48.26 as Alison dos Santos of Brazil rose best to the challenge of the American by clocking an Americas record of 47.57, with third place going to Commonwealth champion Kyron McMaster of the British Virgin Islands, who clocked 47.82.

Local hero Mutaz Barshim, who won world gold in the high jump in this stadium in 2019, equalled his season’s best of 2.30 metres but was upstaged by Authorised Neutral Athlete Ilya Ivanyuk, who cleared 2.33m to win.

Canada’s Olympic champion Derek Drouin, who has not competed since 2017 because of injuries, finished fifth with a season’s best of 2.24m on his return to big-time competition.

Yulimar Rojas, who missed the 26-year-old women’s world triple jump record by just seven centimetres on Saturday (May 22) with an effort of 15.43m, was in slightly more conservative form tonight but still set a meeting record of 15.15m in winning comfortably.

"I enjoy this path, and when it will be Tokyo’s turn I’ll be prepared. and I’ll try to win the gold medal," Rojas said.

Michael Norman won the men’s 400m in the fastest time run this season, 44.27, with Colombia’s Anthony Zambrano second in 44.57 and Norman’s compatriot Fred Kerley third in 44.60, one hundredth of a second ahead of London 2012 champion Kirani James of Grenada, who ran a season’s best.

Katie Nageotte, who leads this year’s rankings in the women’s pole vault with a personal best of 4.93m, won on countback from her US colleague Sandi Morris, the world silver medallist, as both cleared 4.84, a meeting record.

Britain’s Holly Bradshaw was third in a season’s best of 4.74, ahead on countback of Greece’s Olympic champion Katerina Stefanidi.

World champion Anzhelika Sidorova, competing as an Authorised Neutral Athlete and returning to Diamond League action for the first time in almost two years, was seventh with a season’s best of 4.64.

The women’s discus provided further material for discussion about the controversial "final round" format for selected Diamond League field events as Valarie Allman of the United States produced the longest throw of the competition with a fourth-round effort of 65.57, but had to settle for second place after managing only 58.58 as the top three all competed in the one-throw-wins-all finale.

Yaime Perez of Cuba, who had earlier thrown 63.75, won with 61.35, with Croatia’s Olympic champion Sandra Perkovic, who had a best of 63.60, finishing third after failing to record a distance.

Nora Jeruto of Kenya won the women’s 3,000m steeplechase in 9:00.67, the fastest run so far this year, and her compatriot Wycliffe Kinyamal followed up with the fastest men’s 800m time clocked in 2021, 1:43.91, finishing ahead of compatriot Ferguson Rotich who recorded 1:44.45.

Britain’s Daniel Rowden was third in 1:44.60, inside the Olympic qualifying time - which means Britain now has six men qualified.