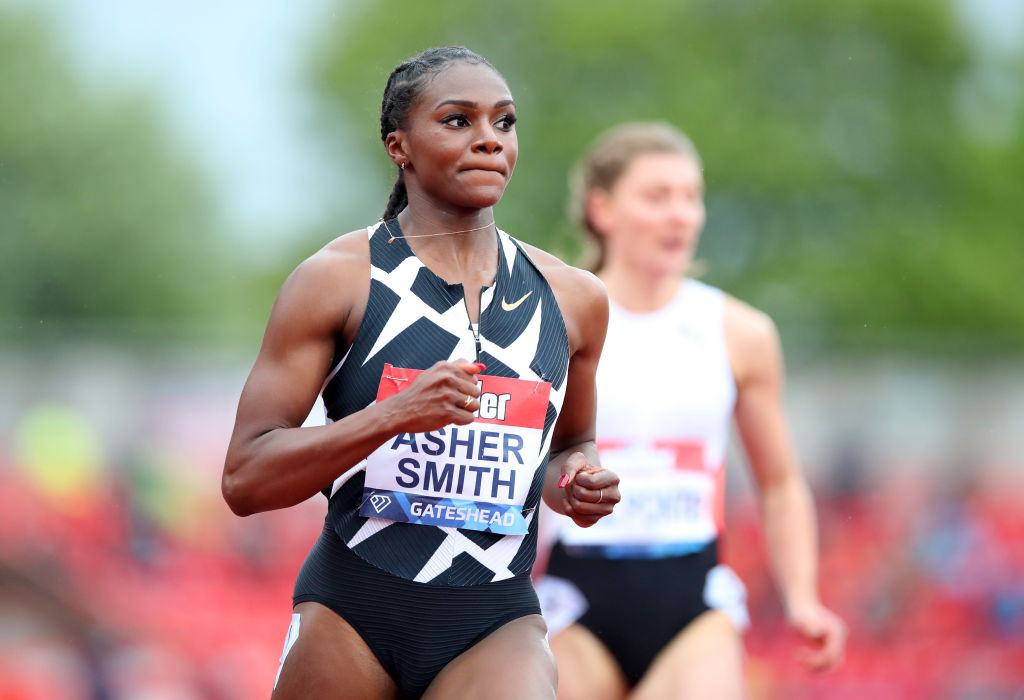 Another Briton rose to the meteorological challenge as Scotland’s Laura Muir won the concluding women’s 1500 metres from Morocco’s Rababe Arafi in 4min 03.73sec.

The ill wind blew several athletes good in the annual Muller Grand Prix, however, as they registered their first Diamond League victories.

Despite a headwind of 3.1 metres-per-second, Asher-Smith produced a season’s best time of 11.35sec to finish clear of the runner who has the three fastest times of the season so far, including the sixth-fastest ever clocking of 10.72.

Britain's world 200m champion had spoken with confidence before the race about the way she had been able to improve her strength and conditioning during the long coronavirus lockdown period, and she turned those words into action in front of a drenched but appreciative - and socially distanced - home crowd.

"It was a pleasing learning experience. I want to show the world and the women in my sport that I am here to stay."@itskerrii on her second place finish at #GatesheadDL

During the heats the conditions had been even worse, with Asher-Smith winning her race in 11.45 into a headwind of 4.4mps, and Richardson winning the other race in 11.53 running into a 4.2mps headwind.

"Conditions were far from ideal for sprinting but the most important thing is to come away with a good result and a win and I was very happy to do that.

"I think all in all today was more of an experience but the only thing that can indicate Tokyo is the Olympic final itself.

"I want to stay focused, do well and get better from here."

"This won't be the last time that I'm going to line up against these ladies and I want to let the world know and let the ladies know that I'm here to compete just as well as they've done for many years.

"I'm here to show them what I'm good at.

"I'm definitely looking forward to running in some sunshine next week in Doha!"

A great win for Kamila #Licwinko in the women's high jump, the 🇵🇱 star topping the field with 1.91m.

A first-time clearance of 1.91 metres meant Poland’s former joint world indoor champion Kamila Licwinko was the surprise winner of a women’s high jump competition that marked the end of a 14-meeting run of victories for Lasitskene, who finished fourth on 1.88m.

But it was an even bigger surprise that the jumper finishing second on countback was Britain’s 23-year-old Emily Borthwick, who had only learned of her qualification for the event less than a couple of weeks ago.

At the European Athletics Indoor Championships in March, Borthwick elevated herself into world class contention as she recorded a four centimetre personal best with a third-time clearance at 1.91m to qualify for the final, where she finished eighth.

Now she has equalled that mark outdoors, finishing one place above fellow Briton Morgan Lake, who cleared 1.88m but beat the woman who has dominated the event for the last six years on countback.

Lasitskene, who shared that world indoor title with Licwinko back in 2014 under her maiden name of Kuchina, failed once at her first height of 1.84m.

Meanwhile the jumper expected to offer her the main challenge, 19-year-old Ukrainian Yaroslava Mahuchikh, who cleared a world under-20 record of 2.04m in losing to her on countback in the 2019 world final, did not start.

Kendricks managed 5.74 at the second attempt, and on this blustery north-east night it was enough, as Duplantis, who set the first of his two world records, at 6.17m, in Glasgow last year, ended with a best of 5.55m after skipping to 5.80m after two failures at 5.74m and appearing to clear it - only for the bar to tumble off at the last second.

"It wasn’t ideal (conditions) but what can you do about it?" said Duplantis.

"The conditions were what they were today, and I wasn't able to adjust quickly enough."@mondohoss600 on a day where he was beaten by both @samkendricks and the weather. #DiamondLeague #GatesheadDL
📷 Matthew Quine pic.twitter.com/UmgL2qHmtS

Kendricks was in characteristic verbal form: "I saw the crowd sitting there, all in pairs, all out in the rain, the British people are amazing; they really know how to enjoy their sport, they know how to get people here and it was so lovely to have people cheering me on.

"I haven't beaten Mondo since the World Championships but I would never aspire to say we are on an even footing - but he is on another level but perhaps the conditions brought us to the same level.

While Duplantis and Lasitskene experienced the rare feeling of defeat, there was no faltering from Norway’s 20-year-old European 1500 and 5,000m champion Jakob Ingebrigtsen, for whom this evening’s weather was a breeze compared to conditions he is used to back home.

Ingebrigtsen did enough in the 1500m to hold at bay the two rising Australian talents at his heels, winning in a season’s best of 3min 36.27sec, with Oliver Hoare second in 3:36.58 and Stewart McSweyn third in 3:37.32.

There was a first Diamond League win too in the men’s long jump, where athletes benefited from the strong wind at their backs, and Italy’s Filippo Randazzo earned victory with a concluding effort of 8.11m, only a centimetre less than his personal best, after qualifying for the one-shot final involving the top three jumpers.

Spain’s Eusebio Cacares was second on 8.04m, with Jamaica’s world champion Tajay Gayle, who had earned his place in the jump off with 8.00m, managing 7.91m for third place.

Kenny Bednarek of the United States added his name to the list of debutant Diamond League winners as he clocked 20.33 in the 200m.

Mohamed Katir of Spain also registered a first-time Diamond League victory as he held off Kenya’s Nicholas Kipkorir in pouring rain to win the men’s 5,000m in a personal best of 13:08.52.

Poland's Marcin Krukowski, wearing a blue woolly hat, added his name to the list of unlikely Diamond League winners with a final javelin effort of 81.18m.

The Diamond League moves on next to Doha in Qatar on May 28.