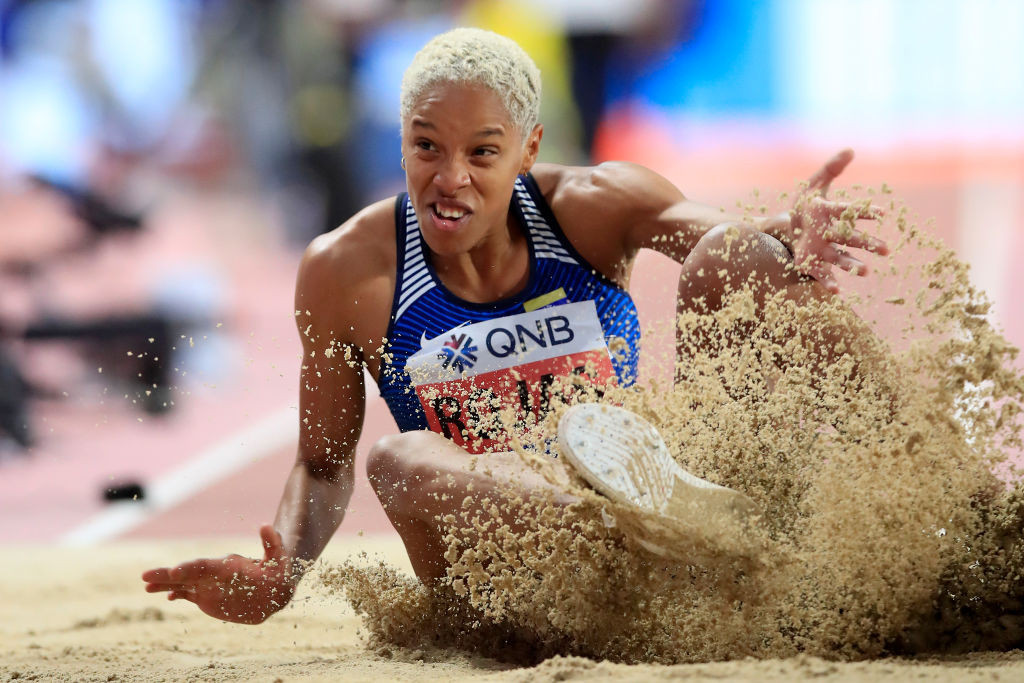 Venezuela's Yulimar Rojas is in awesome form as she prepares to compete in tomorrow night's second Diamond League meeting of the season at the Khalifa Stadium in Doha, where she retained her world triple jump title in 2019.

That second world title was won with a huge effort of 15.37 metres, and last Saturday (May 22) Rojas moved even closer to the outdoor world record of 15.50m set by Ukraine's Inessa Kravets at the 1995 World Championships - recording 15.43m at the World Athletics Continental Tour meeting in Andujar.

That matched the world indoor record she set in Madrid in February 2020, and underlined that the exuberant 25-year-old is in the shape of her life heading into the postponed Tokyo 2020 Olympics, where she will seek to improve upon the silver medal she won in Rio five years ago.

Among her opponents in Doha will be the Colombian who took gold in Rio, 35-year-old Caterine Ibarguen, as well as Jamaican talents Shanieka Ricketts, the world silver medallist, and Commonwealth champion Kimberly Williams.

Ukraine's 37-year-old 2011 world champion Olga Saladukha is another in the field.

The women's pole vault will also see the world's best talents congregating once again at the scene of their 2019 success, with the top eight finishers from that competition involved.

She vaulted 4.90 metres during the indoor season but has not competed since then.

"I believe I have the physical ability to break the world record"@sandicheekspv has more determination than ever to excel in the pole vault ?#DohaDL #DiamondLeague pic.twitter.com/hbnmo95BbE

Sandi Morris of the United States, who took world silver behind Sidorova with a clearance of 4.90m, is in buoyant mood, claiming at the pre-event press conference today that she believes the world record of 5.06m set in 2009 by Russia's Yelena Isinbayeva is within her reach.

"I believe I have the physical ability to break the world record," said the 28-year-old Olympic silver medallist and world indoor champion, who in 2016 became the only other woman to clear 5.00m outdoors.

"The realisation came in 2016 for me that I have the speed and the physicality to do it and I just have to fix my technique, although that's easier said than done because I've been trying to do it for six years.

"But I believe I can, and now the window is getting smaller and smaller and I want to take advantage of that, so it's kind of lit a fire under me.

"I don't know how many years I've got left so I am really gong to go for this."

But Morris' compatriot Katie Nageotte may start as the slight favourite having recently cleared a personal best of 4.93m that leads this year's world list.

The women’s steeplechase also features the top five finishers from the World Championships, led by the gold medallist and world record-holder Beatrice Chepkoech.

The Kenyan has not contested a steeplechase so far this year, but clocked a world five kilometres record on the roads of 14min 43sec in February, followed three days later by an indoor 3,000 metres personal best of 8:31.72.

The two women who preceded Chepkoech as world champion - Emma Coburn of the US and Kenya's Hyvin Kiyeng - are also in the line-up.

Five days after their meeting over 100 metres in the wind and rain of Gateshead at the opening Diamond League meeting of the season, Sha'Carri Richardson and Shelly-Ann Fraser-Pryce will expect to be running significantly faster in a more encouraging climate.

Running into a headwind of 3.1 metres-per-second in the north-east English town, Richardson, who tops this year's world list with 10.72sec, clocked 11.44.

The 34-year-old world and double Olympic champion Fraser-Pryce, who won her Doha title in 10.71, finished fourth in 11.51.

"I am really looking forward to running below 10.7," Fraser-Pryce said in the press conference.

"You know that is definitely a big dream and something that I'm working hard towards.

10.6 seconds or faster is the target for @realshellyannfp

The Briton who finished first in Gateshead in 11.35, Dina Asher-Smith, will not be present on this occasion at the track where she took 100m silver and 200m gold in 2019.

The men's 400 metres hurdles will see a re-match of the world silver and bronze medallists, Rai Benjamin of the US and Qatar's Abderrahman Samba.

Benjamin leads this year's rankings with the 47.13sec he set at the Continental Tour Gold meeting at Walnut, California earlier this month.

Samba has not contested a hurdles race since the 2019 World Championships final, but a 45.43 clocking on the flat in South Africa two months ago shows he is in good shape.

Commonwealth champion Kyron McMaster of the British Virgin Islands and Alison Dos Santos of Brazil, who recorded national records of 47.50 and 47.68 respectively when finishing behind Benjamin at Walnut, are also in the line-up.

Americans Michael Norman and Fred Kerley will meet at their specialist distance of 400 metres.

Norman, who topped the world rankings in 2018 and 2019 and is equal fourth on the all-time list with 43.45sec, is undefeated over one lap this year.

Meanwhile, home high jumper Mutaz Barshim, who provided the high moment of the 2019 World Championships for Qatari fans as he secured the title with a clearance of 2.37 metres, will compete for the first time in four years against Canada's Rio 2016 Olympic champion Derek Drouin, who has been out of action since 2017 with injuries.

Kenya's Timothy Cheruiyot and Hellen Obiri, who earned world titles in Doha at 1500 and 5,000 metres respectively, are back in action at their specialist distances.