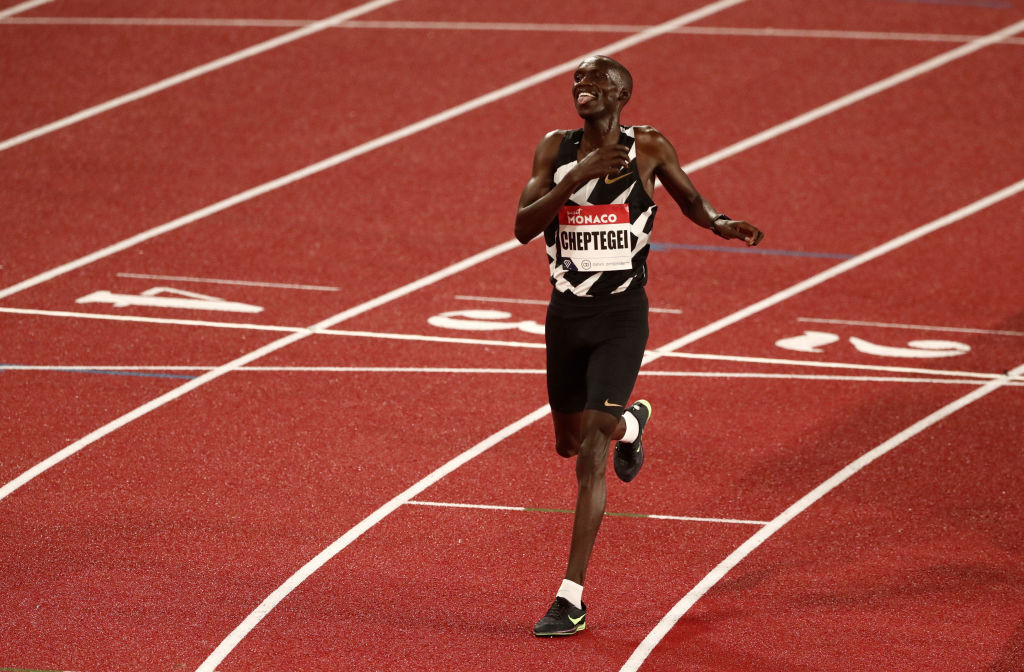 Uganda’s world 5,000 and 10,000 metres record holder Joshua Cheptegei showed he is human after all as he found the 25-year-old 3,000m world record of 7min 20.67sec set by Kenya’s Daniel Komen beyond him at the World Athletics Continental Tour Gold meeting in Ostrava.

But his front-running personal best of 7:33.24 was still one of five world bests set on a thoroughly chilly evening at the Městský Stadion in what was the 60th Golden Spike meeting.

The men’s javelin stadium record was better than your average, given that it was set by home thrower and world record holder Jan Zelezny at 94.64 metres.

But Germany’s 2017 world champion Johannes Vetter, whose best of 97.76m puts him second on the all-time list behind Zelezny’s world record of 98.48m, got very close to it with a first round effort of 94.20m, the seventh farthest in history that comfortably tops this year’s world list.

That time also took Burgin comfortably inside the Olympic qualifying time of 1:45.20, something he bettered with 1:44.75 last year, but unfortunately at a time when the qualifying window was closed due to the pandemic.

What a ?@jojo_javelin produces impressive 94.20m world lead with third biggest throw of his career.

The only man to have ever thrown farther than the German is @ZlataTretra meeting director and world record-holder Jan Zelezny.#ContinentalTourGold pic.twitter.com/FNYtb47c0d

It was the first time Hodgkinson, who moved clear of the field around the final bend and drew away down the home straight, had beaten two minutes outdoors - her previous best was 2:01.73 - and also bettered the world under-20 indoor record of 1:59.03 she set earlier this year.

And Ethiopia’s Getnet Wale also found himself holding the world lead placard for the cameras after winning the 3,000m steeplechase in 8:09.47, with second-placed Britain’s Phil Norman earning the Olympic qualification time in 8:20.12, the fastest by a European this season.

Richardson said afterwards: "Nothing that I do is a fluke, everything is legit, it comes from hard work and talent and I want to continue to show the world that my bark may be loud, but my bite and my actions are even louder."

It was a disappointing night for several towering talents however.

Home javelin world record holder Barbora Spotakova could only manage fourth place with 59.49m behind the winning mark of 66.56m by Germany’s Christin Hussong, while in the women’s hammer Poland’s 2012 and 2016 Olympic champion Anita Wlodarczyk had to settle for third place with 72.72m in a competition won by her compatriot Malwina Kopron, who reached 74.74.

Olympic and world triple jump champion Christian Taylor of the United States was out of sorts and finished fifth with a best of 16.36m as victory went to the in-form man from Burkina Faso, Hugues Fabrice Zango, who reached 17.20m.

And on the track, Ethiopia’s world 1500m champion Genzebe Dibaba failed to finish, dropping out near the end of a race won in 4:04.20 by her compatriot Freweyni Hailu.

Fred Kerley, a member of the victorious United States 4x400m team at the Doha 2019 World Championships, won the 100m in 9.96, close to the personal best of 9.91 he ran last month with a maximum allowable 2.0mps wind at his back in Miami.

British success extended to the women’s 400m hurdles, where Jessie Knight won in a personal best of 54.74 from Ukraine’s Anna Ryzhykova, who clocked 55.09.

All in all it was a fascinating night of athletics, setting up the opening World Athletics Diamond League meeting of the season at Gateshead this Sunday (May 23), when many of Ostrava’s stand-out performers will be involved.