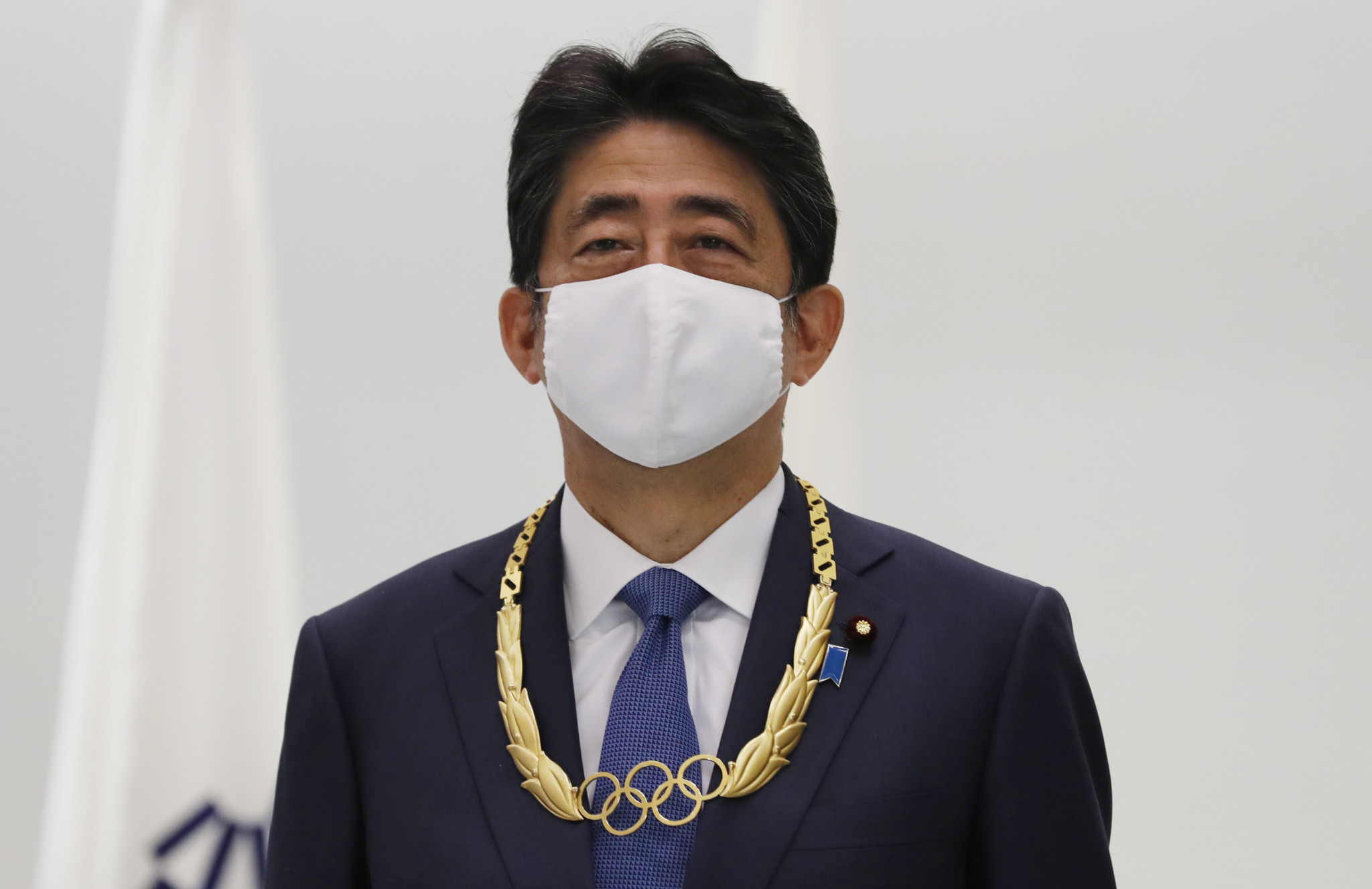 Abe was presented with the accolade by International Olympic Committee (IOC) President Thomas Bach during his visit to Tokyo.

Abe announced in August he was stepping down as Japanese Prime Minister for the second time, citing ill health.

The 66-year-old suffers from ulcerative colitis.

He had previously been heavily involved in preparations for the Tokyo 2020 Olympic and Paralympic Games.

"I understand that this gold Order given to me today is the highest award that honours the greatest contributions made to enhance the Olympic Movement," Abe said.

"Tokyo 2020 will be the Games that extol the nobleness of the human spirit, in which we stand up time and time again, no matter how many times we are defeated."

Abe and Bach agreed earlier this year to postpone the Olympic Games until 2021 due to the coronavirus pandemic.

Bach's visit included today a meeting with Abe's successor Yoshihide Suga, with the focus on preparations for the rescheduled Games.

The German paid tribute to Abe's role in supporting the Games.

He became Japan's Prime Minister for the second time in 2012 – having previously served from 2006 to 2007 before stepping down to receive treatment.

Former Japanese PM, Abe Shinzo , receiving the Olympic Movement's highest award, the Olympic Order in Gold. Abe helped win the Games for Tokyo in 2013. He later made a surprise appearance at the Closing Ceremony of the Olympic Games Rio 2016, dressed as Super Mario. #tokyo2020 pic.twitter.com/q7ErlXPOVe

He heavily backed Tokyo's bid to host the 2020 Olympic and Paralympic Games.

The Japanese capital was awarded hosting rights at the 125th IOC Session in 2013 – an event Abe spoke at.

Abe flew to Buenos Aires in Argentina from a G20 Summit in Saint Petersburg in Russia, to address IOC members and allay fears over the Fukushima nuclear accident.

At the Rio 2016 Closing Ceremony, he appeared dressed as the popular Nintendo character Mario.

"Ever since that September day in Buenos Aires, you have demonstrated your unwavering commitment to the Olympic Games and the Olympic values," Bach said.

"This was evident in all your personal engagement in overseeing and supporting the preparations for the Tokyo 2020 Olympic Games.

"With your unfaltering belief in the power of sport, it is no exaggeration to say that you have forged a special friendship with the Olympic community.

"Your dedication to the Olympic cause reached new heights at the Closing Ceremony of the Rio 2016 Olympic Games.

"I will never forget the moment that you appeared in the middle of the Olympic Stadium dressed up as Super Mario.

"In doing so, you wrote Olympic history and promoted Japanese culture on the world stage in an unforgettable and creative way.

"At the same time, you also demonstrated a sense of humour and light-heartedness, which took many people around the world by surprise."

Tokyo 2020 President Yoshirō Mori, himself a former Japanese Prime Minister, reportedly joked that he is Yoshi – Mario's friend in the video game series.