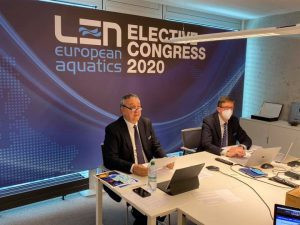 Paolo Barelli of Italy has been re-elected European Swimming League (LEN) President after seeing off the challenge of French rival Gilles Sezionale at the organisation's virtual Congress today.

Barelli secured a fresh four-year term at the helm of the continental body after defeating Sezionale, the President of the French Swimming Federation, by 86 votes to 13.

David Sparkes retained his position as general secretary, while Fernando Carpena has replaced International Swimming Federation Executive member Tamás Gyárfás - who was arrested in 2018 on suspicion of ordering the murder of a business rival in 1998, which he denies - as treasurer.

Denmark's Pia Holmen and Hungarian Sports Minister Tünde Szabó were elected as LEN's first female vice-presidents during the Congress, held online due to the coronavirus pandemic.

Dimitris Diathesopoulos of Greece, a LEN Bureau member since 1990, was re-elected as a vice-president.

Barelli, secretary general David Sparkes and Gyárfás - appointed an honorary member of the LEN Bureau at today's meeting - were accused earlier this year of financial irregularities linked to a series of questionable contracts.

The officials, who deny wrongdoing, were reported to European authorities over reportedly authorising six-figure payments to third-party companies over a period of five years.

Barelli, who represented Italy in swimming at two Olympic Games, has proven to be a controversial figure in the sport's corridors of power.

In 2017, he was beaten by longstanding incumbent Julio Maglione in the FINA Presidential election following a bitter campaign.

Barelli, LEN President since 2012, later lost two separate cases against FINA at the Court of Arbitration for Sport.

"Even if we came together only on the web, this Congress was once again the celebration of our unity and a sound approval on everything we have achieved so far," Barelli said after his re-election.

"In the past years, European Aquatics enjoyed a really successful period and the benefits were significant.

"We were able to share those with our National Federations offering them financial support and with our athletes who could earn ever-growing amounts of prize-money at our events.

"They are the frontrunners in this success story, they deserve all credit for making Europe the number one continent in aquatics."