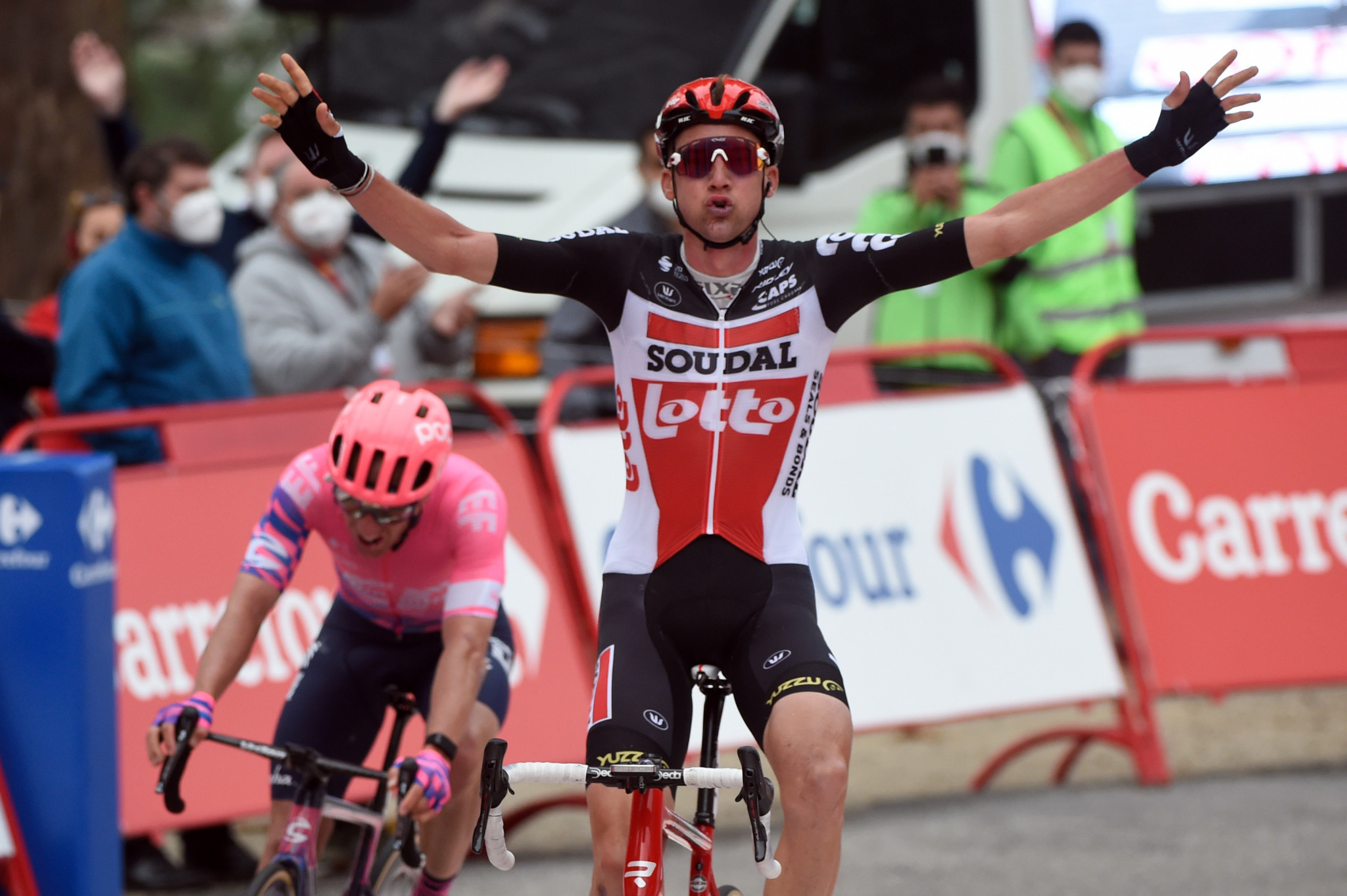 Belgium’s Tim Wellens earned his second victory of this year’s Vuelta a España, winning the 204-kilometre 14th stage from Lugo to Ourense.

Wellens featured in the main breakaway of the day, as the Lotto Soudal rider sought to match his triumph on stage five in Sabiñanigo.

He was joined in the move by the Czech Republic’s Zdeněk Štybar, The Netherlands’ Dylan van Baarle, Canada’s Michael Woods and Spain’s Marc Soler.

The five riders pulled away from the peloton after 50km of the stage, with France’s Pierre-Luc Périchon joining 3km later.

The group established a lead of around five minutes after the categorised climbs up the Alto de Escairon and Alto de Guitara, although their advantage was cut in half by the time they reached the final ascent at the Alto de Abelaira.

Štybar, Soler and Wellens were briefly able to move clear on the descent with 14km remaining of the stage, but their fellow breakaway riders regained contact.

The stage victory was decided in the 1km uphill finish, with Wellens holding off the challenge of Woods to triumph in 4 hours 37min 5sec.

Woods finished as the runner-up, with Štybar also level on the same time in third.

"We rode a really good tempo for the whole day and then we went away with three riders on a downhill," Wellens said.

"I thought we’d stay in front but the others came back.

"Then I knew I had to be in the front position in the last corner.

"I felt Woods coming but the finish line was there and I crossed it first.

"The whole day, I had the impression Van Baarle was the best.

"But when we split up a little bit, I saw that Woods and Soler had really good legs.

"I was afraid of Woods for the uphill sprint but I did well, going first.

"We came with the team with the goal of a stage victory.

"The first one came and we had less pressure to go for a second one.

"I knew today suited me very well, it’s one thing to look forward to a stage but then it’s another to be in the right position.

"Today, everything was perfect."

?? Stage 14 | #LaVuelta20@Tim_Wellens claimed a second stage win after a demanding day in Galicia. The Belgian puncheur won over @rusty_woods while the GC finished together.

Ireland’s Dan Martin led the general classification group over the line at 3:44 down on the stage winner.

Britain’s Hugh Carthy lies eight seconds further back in third, with Martin fourth at 1:42 back.

Racing will continue tomorrow with a 230km stage from Mos to Puebla de Sanabria.