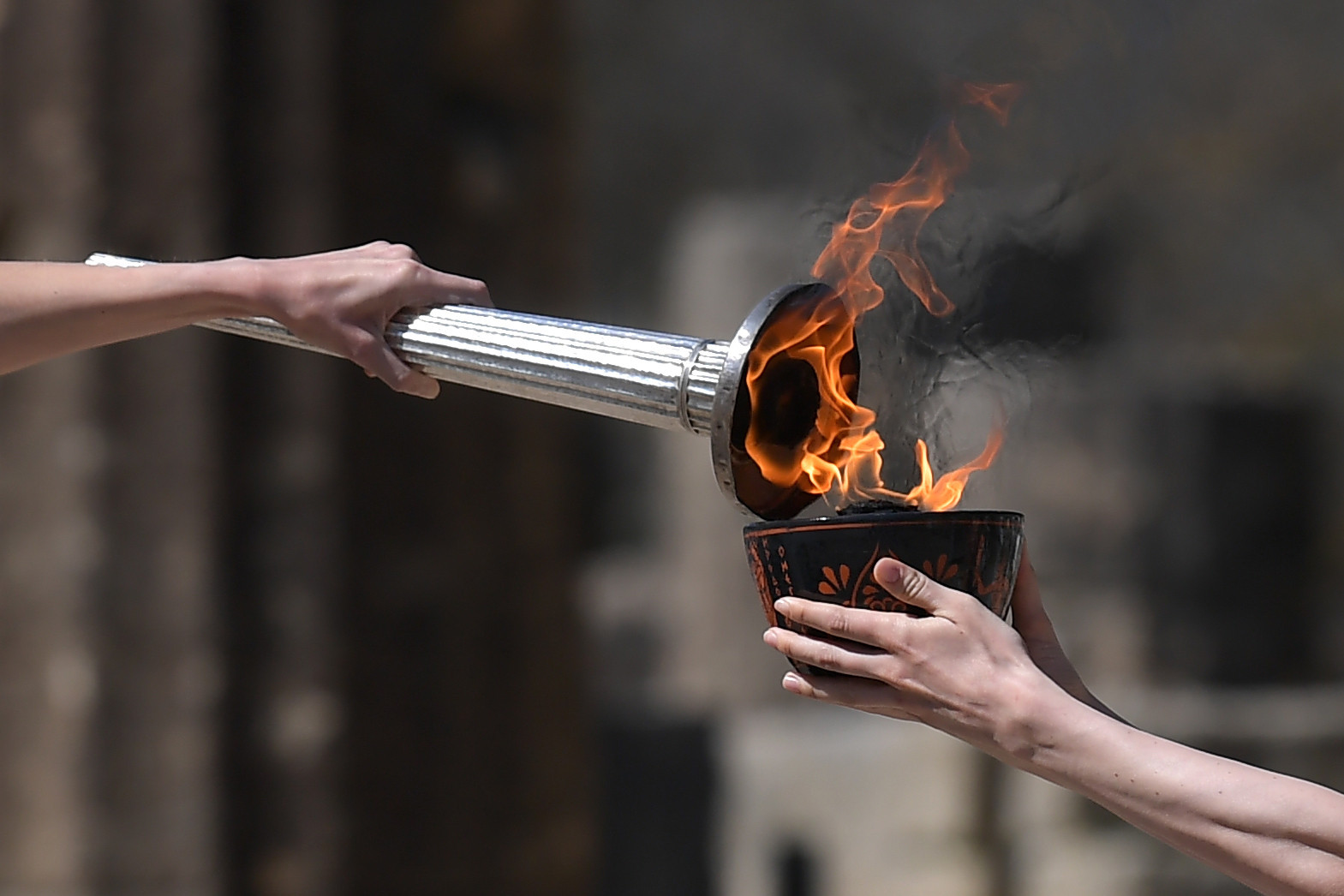 The Tokyo 2020 Torch has begun its journey from Ancient Olympia to the Japanese capital after the traditional lighting ceremony in the place where the Olympic Games of antiquity were held.

After a week in which the coronavirus has been the main topic of conversation, the ceremony here provided a welcome and moving spectacle, even though only a select group of invited guests were permitted to watch the proceedings.

The outgoing President of Greece, Prokopis Pavlopoulos, watched the event in one of his last official engagements before standing down and was accompanied by International Olympic Committee (IOC) President Thomas Bach.

They were joined by Bach's new IOC colleague Yasuhiro Yamashita, the legendary judoka who is also President of the Japanese Olympic Committee.

The first runner was Rio 2016 pistol shooting gold medallist Anna Korakaki, who became the first woman to carry an Olympic Torch within the stadium.

After the traditional visit to the Coubertin monument to pay tribute to the renovator of the Modern Games, she passed the flame to another woman, Athens 2004 marathon champion Mizuki Noguchi, who became the first Japanese participant in the Relay.

The flame was kindled in the ruins of the temple by the high priestess of the ceremony, played by Xanthi Georgiou, a classical performer from Greece.

She intoned a prayer to Apollo called "God of Son and the Idea of Light".

The words ask Apollo to "send us your rays and light the sacred Torch for the hospitable city of Tokyo".

Only 100 invited guests from the IOC, Tokyo 2020 and the Hellenic Olympic Committee (HOC) were present in all.

"We are especially grateful that you made today's ceremony possible even under the difficult circumstances," Bach told officials.

"This demonstrates once more our commitment to the success of the Tokyo 2020 Olympic Games.

"Nineteen weeks from the Opening Ceremony, we are strengthened in this commitment by many authorities and sports organisations around the world  who are taking so many significant measures to contain the spread of the coronavirus.

"The Olympic Games Tokyo 2020 are delivered by an all-star, all-Japan team with outstanding support and cooperation from all levels of Government, with incredible efficiency, effectiveness and enthusiasm.

"They are taking the famous Japanese reliability to the next level.

"The Olympic flame represents our hope for a better future."

The flame was taken in procession through the ancient precincts, with the route lined by a group of young men who evoked the heralds or messengers of ancient times.

The priestesses danced on the hillside in a performance entitled "Ancient Echoes", which was inspired by paintings and carved images on artifacts of the period.

The priestesses wore the traditional Greek gown known as a chiton, which were made by the renowned designer Eleni Kyriacou.

Special music, written for the occasion by Yannis Psimadas, included melodies on the Apollonian lyre, accompanied by flute and percussion.

In the centre of Olympia itself, large crowds gathered to watch the runners pass through.

The flame travelled to Ancient Ilida, the home region for Coroibus, the first known champion of the Ancient Games in 776 BC.

It then headed to Pyrgos, some 18 kilometres from Olympia, and was due to end the day in Kalamata.

The Relay will continue until next Thursday (March 19) when the flame will be formally handed over to the Tokyo 2020 delegation at a special ceremony in the Panathinaiko Stadium in Athens.

"However, the beautiful images broadcast from the historic location captured in their entirety the Olympic spirit.

"Let us hope that our prayers to Apollo to bring the sun and flame for Tokyo will also bring the strength to overcome the global challenges and turn them into passion and success for the Games."

Toshiako Endo, the Tokyo 2020 President's special envoy, added: "We are very grateful that all concerned people in Greece have taken all possible and appropriate measures for the lighting ceremony and following events.

"Currently the novel coronavirus outbreak continues to spread across the world every day.

"All nations will continue taking the best efforts together until the coronavirus is all over.

"We the Tokyo Organising Committee will achieve the success of the Olympic Games, well prepared in close cooperation with the IOC, the Government of Japan and the Tokyo Metropolitan Government."