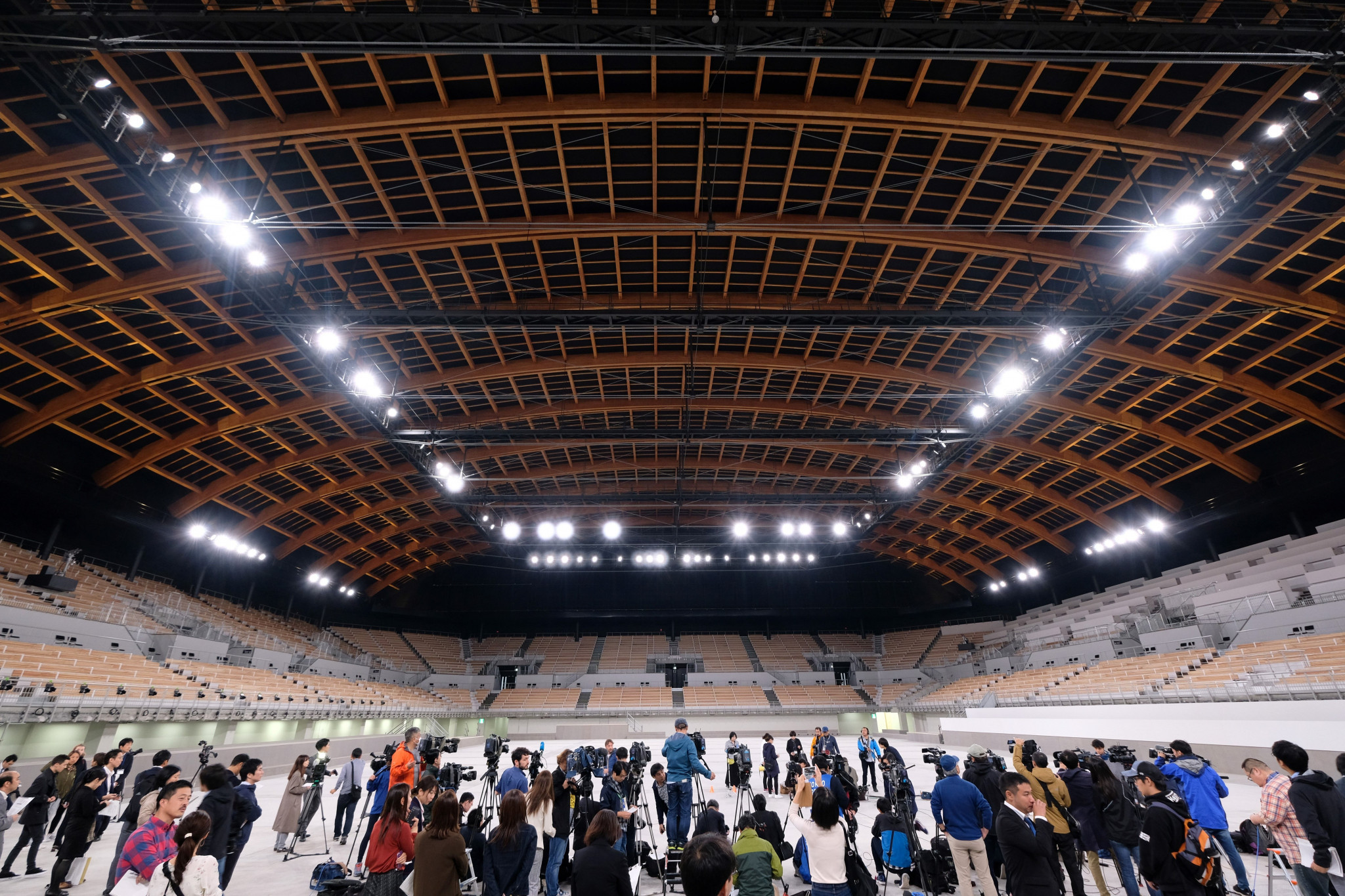 Tokyo 2020 has unveiled the completed Ariake Gymnastics Centre, with the traditional Japanese style facility one of the latest venues delivered for next year’s Olympic and Paralympic Games.

The 12,000-capacity venue is set to host artistic, rhythmic and trampoline gymnastics competitions during the Olympic Games.

Boccia will then be held at the venue during the Paralympic Games.

Tokyo 2020 claim the on-time completion is evidence their preparations for the Games are on track.

The venue is located in the Tokyo Bay Zone, with the Athletes’ Village and Main Press Centre claimed to be a five minutes drive away.

The Ariake Tennis Park and the Ariake Arena, where volleyball competition will take place, after close to the completed building.

Construction is also continuing on the nearby temporary Ariake Urban Sports Park, which will host BMX Freestyle, BMX racing and skateboarding events.

Tokyo 2020 revealed the area was previously used primarily for timber storage, which inspired the design and construction of the Ariake Gymnastics Centre.

Timber has been used for the roof frames, the main auditorium and the building’s exterior, with the design aimed at showcasing traditional Japanese craftsmanship.

Organisers claim the venue features one of the largest timber roofs in the world, with the 30-metre-wide structure built from larch wood from the Nagano and Hokkaido prefectures.

Japanese cedar was used to create the exterior shape of wooden vessels, with Tokyo 2020 claiming the external concourse is similar to an engawa, a Japanese-style veranda.

The venue has 90 metre wooden roof beams and is free of steel framework, which has allowed the creation of a large open space without pillars in the centre of the venue.

Spectators will sit on specially crafted wooden benches at the venue made of cedar from the Mie prefecture.

Ticket holders will be in their seats from July 25 next year, when the artistic gymnastics competition begins.

Medals will be won in artistic gymnastics from July 27 to 30, as well as from August 2 to 4.

Tokyo 2020 gymnastics sport manager Koichi Endo expressed his hope the venue could create a similar atmosphere to the 1964 Olympic Games, where his father clinched gold in the men’s individual all-around, parallel bars and team event.

"We need to ensure the athletes are not alone, but are one with the spectators to help them perform well," Endo said.

"We want the make it the best Games possible.

"The first event here will be the World Trampoline Championships in November.

"Olympic qualification will be on offer, so it will be a big event for the opening of the venue."

Boccia competition will take place at the venue from August 29 to September 5.

Yasumasa Saito, the boccia’s venue manager, claimed there had been a high interest in Paralympic tickets.

"The sport is gaining interest," he said.

"This needs to be a full stadium so the athletes can perform to their best."

Tokyo 2020 say the only three remaining permanent venues need to be completed, with five having already been delivered.

The Games also has 25 existing venues and will have 10 temporary structures.

The Olympic Stadium is expected to be completed by the Japan Sport Council in the coming days, with Tokyo 2020 deeming the venue to be 99 per cent complete.

The Ariake Arena will be delivered in December by the Tokyo Metropolitan Government, with the Tokyo Aquatics Centre set to be the final completed venue in February.