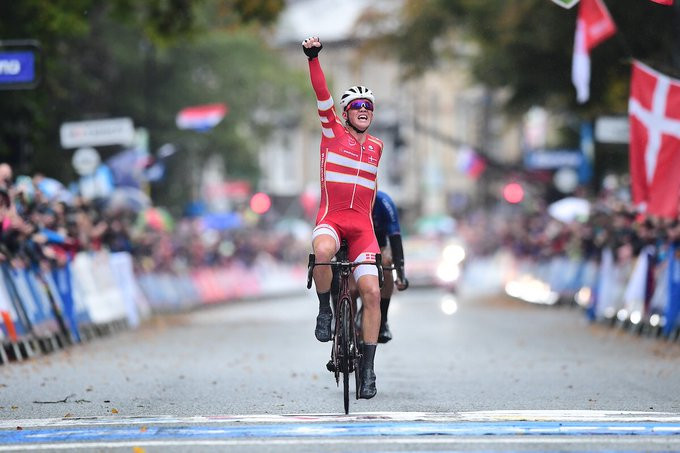 Denmark's Mads Pedersen secured the biggest victory of his career as he stunned the rest of the field to win the men's road race at the International Cycling Union World Championships in Yorkshire.

The 23-year-old Trek–Segafredo rider upset Italian Matteo Trentin and Switzerland’s Stefan Küng in a sprint finish at the conclusion of a race which had to be shortened by 23.5 kilometres because of heavy rain.

Trentin, who rides for Mitchelton–Scott, was favourite to secure the gold medal in the latter stages and was visibly shellshocked after he was beaten into first place by the unfancied Dane.

Groupama–FDJ's Küng was forced to settle for third.

Pedersen, second at last year's Tour of Flanders, clocked a winning time of 6 hours 27min 28sec to produce a huge shock in Harrogate in a race shortened to 261km.

Trentin finished in the same time, with Küng two seconds behind in third.

The race, which started in Leeds, was held in treacherous conditions for the riders amid constant rainfall on the roads in the English county.

It added extra strain and pressure on the field, with standing water, as well as driving rain, proving a considerable obstacle.

Pedersen joined Küng at the top of the pack with 45km to go before Gianni Moscon of Italy and Dutchman Mathieu van der Poel came up to the front 15km later.

Van der Poel, considered one of the favourites before the race, could not keep up and was dropped with 12km to go, leaving Pedersen, Trentin and Küng to battle it out for victory.

Trentin appeared destined to seal gold in the closing kilometres but Pedersen found another gear and pipped the Italian to the line.

"I didn't expect this when we started this morning," Pedersen admitted.

"The plan was to get me out in the early move in the finale and then get Michael Valgren and Jakob Fuglsang to come up from behind but they didn't follow Mathieu van der Poel and Matteo Trentin when they came up to my group.

"At that point it was just survive and hope for the best in the sprint.

"I just hoped that when I saw the finish line all the pain would be gone and I could do a good sprint.

"Everyone is on the limit so anything could happen in that sprint.

"It's every rider's dream to wear the rainbow jersey, and for me to do it now is unbelievable."