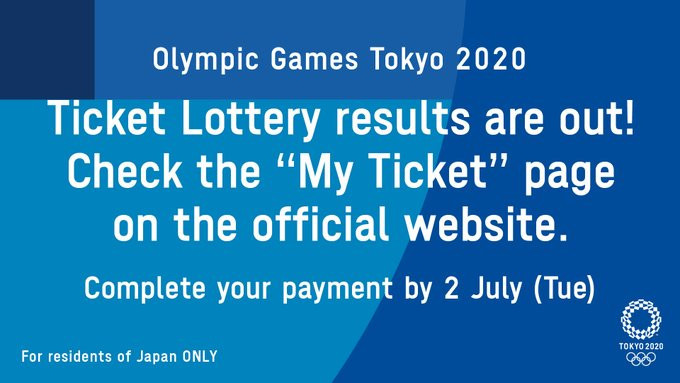 Tokyo 2020 will hold additional lotteries for Olympic tickets later this year for Japanese residents who were unsuccessful in the first ballot in June.

According to the Organising Committee, around 3.2 million tickets were sold in the opening lottery and "hundreds of thousands" of seats for next year's Olympic Games will be made available in a second ballot.

Tickets for the Opening and Closing Ceremonies and finals in several sports are not expected to be included, the Japan Times reported.

The next ballot is set to be held in August, with the potential for another lottery to take place in the autumn.

Tokyo 2020 are not likely to use the first-come, first-served format because of concerns over connection problems owing to the expected heavy traffic.

Over 7.5 million Japanese residents entered the first ballot and millions were left disappointed after failing to secure Olympic tickets.

The official ticketing website was visited more than 24,250,000 times in May as a result of the huge demand.

[For residents of Japan ONLY]
? Check your ticket lottery result: https://t.co/yaovhBKMq6

For those of you who have won tickets in the initial ticket offering for the Olympic Games Tokyo 2020, be sure to complete the payment for all winning tickets before the 2 July 2019. ? pic.twitter.com/9Ow6Ct7Dw0

It has not been revealed how many tickets will be on offer in the additional lotteries but Tokyo 2020 ticketing director Hidenori Suzuki said the number would not exceed those purchased in the first phase.

Residents of Japan will still be able to request tickets during the first-come, first-served phase due to begin in autumn 2019.

The final ticket sales phase is scheduled to start in the spring of 2020, offering first-come, first-served sales for purchasers inside and outside of Japan.

Details are set to be announced at a later date.

People living outside of Japan will first be able to purchase tickets through authorised ticket resellers (ATRs) in their home countries.