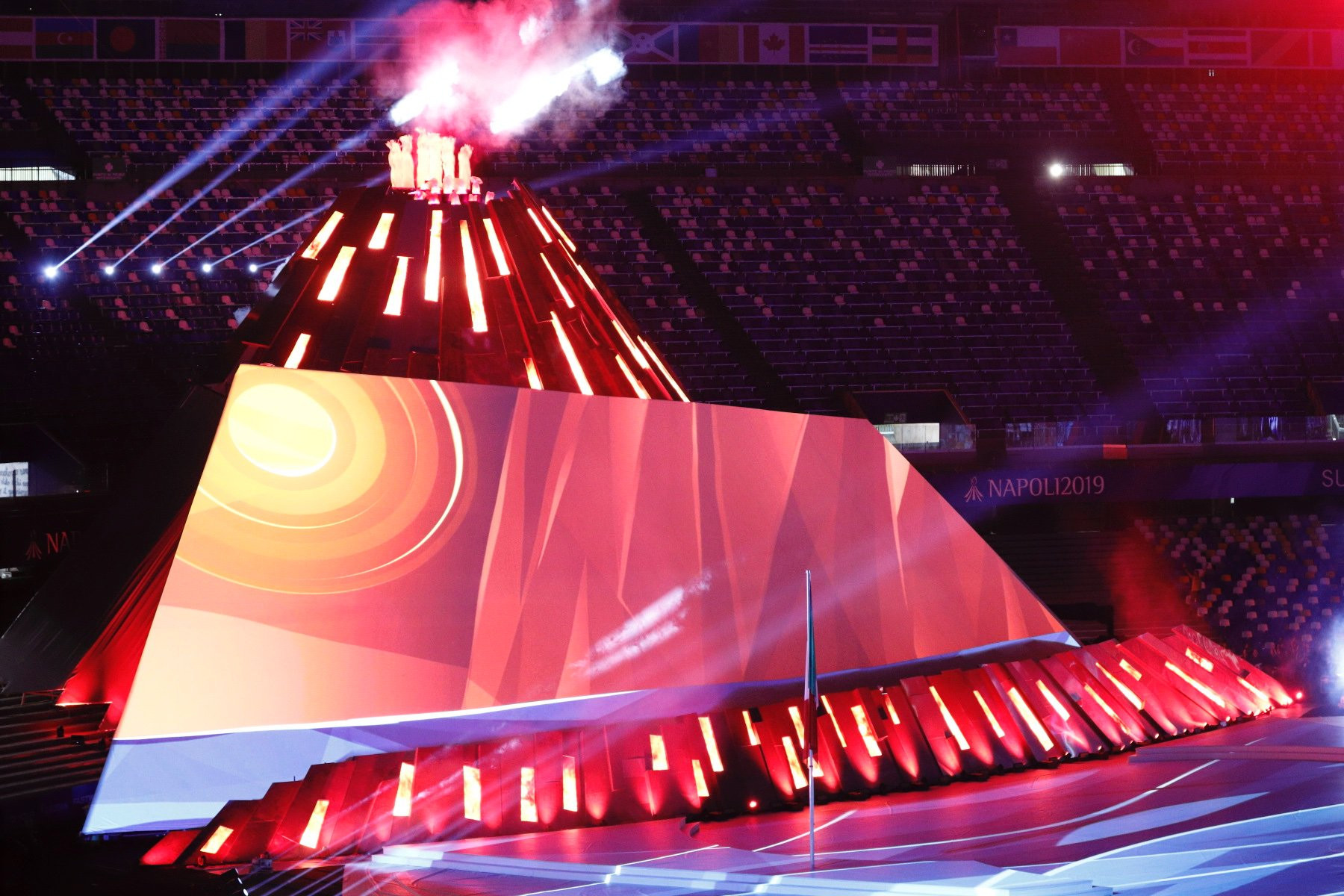 In the stadium where the whole of Italy shed tears after losing the 1990 World Cup semi-final on penalties, SSC Napoli star Lorenzo Insigne fired a dramatic flaming penalty to ignite a cauldron modelled on Mount Vesuvius.

The Flame did not actually burn, because in the words of organisers "sustainability is key for the new generation, so special effects will be used".

It made for a spectacular moment.

The Opening Ceremony here on Wednesday was a reflection of just how much the Universiade has grown in 60 years since the first University Games in the northern Italian city of Turin in 1959.

"All of our journeys have connected with the history of university sport," said International University Sports Federation (FISU) President Oleg Matytsin.

The ceremonies in 1959 and 2019 both began late on a hot summer night but there the similarity ends.

The 2019 opening was a spectacular with mermaids, rap and opera, Nobel laureates, spectacular light shows, stars of the past and those of the future.

There was even a sly take on the acquisition of knowledge with a new arrangement of Pink Floyd’s "Another Brick in the Wall" which of course includes the line "We don’t need no education".

The whole thing took place only nine days after Milan and Cortina d’Ampezzo won the right to stage the 2026 Winter Olympics and Paralympics.

This ceremony had more than a few echoes of the Torino 2006 Winter Olympics.

This was not altogether surprising because producer Marco Balich was responsible for both.

At the start, they recreated the Bay of Naples in the centre of the arena.

Partenope the mermaid mascot flew through the air in the first dramatic moment of the Games.

In reality, she was world record-holding free diver Mariafelicia Carraturo.

In the stadium where 70,000 Napoli fans once saluted the arrival of Argentinian superstar Diego Maradona, the fans now welcomed the student teams from 118 countries.

There was a huge welcome for Argentina. Call it the Maradona factor.

A team of refugees had competed at the Olympics for the first time at Rio 2016 but for the Universiade, some 40 migrants carried the name plates which preceded the teams into the stadium.

They came from Burkina Faso, Guinea, Niger, Senegal and Cameroon and many more besides.

In the words of creative director Lida Castelli: "We made a huge statement to remind us that we are all migrants and all part of the same world."

This time there was no unified team from Korea.

The North came in early, the South before the end.

The Uruguayans knew how to win friends and influence people: "Napoli – Uruguay loves you," said their banner

There was of course also a huge roar for the host nation, who wore white but sported blue trilbys.

They are known as the "Azzurri" after all.

As they broke ranks to greet the vast banks of fans, it was a spine-tingling moment as the crowd responded.

They entered to an Italian cover version of the Laura Branigan hit "Gloria" and will no doubt hope for more of the same over the next week or so.

There had been plenty in the past when the team had included such great champions as sprinters Livio Berruti and Pietro Mennea, high jumper Sara Simeoni and swimmer Gregorio Paltrinieri.

Where supermodel Carla Bruni brought in the Italian tricolor at Torino 2006, the honour fell this time to Paralympic fencing champion Bebe Vio.

Her long, flowing red dress was by Giorgio Armani and was typical Italian elegance.

The singing anthem by the crowd which followed stirred the emotions, Italian or not.

The arrival of the FISU flag involved Italy’s most revered figures from science and sport.

Triple Olympic diving champion Klaus Dibiasi enjoyed the recognition of a crowd in the city where he won his first major medal 56 years ago.

He also won gold at the 1970 Universiade in Torino.

Their work in detecting gravitational waves as part of the LIGO-Virgo international partnership had proved crucial in the research.

The Flame had begun its journey in Turin a month ago almost to the day and had even been greeted by Pope Francis at the Vatican.

There was a roar at the surprise appearance of Napoli goalkeeper Alex Meret, Then came Insigne’s flaming penalty.

It is not the first time a volcano has been used as a central motif.

A year ago in Jakarta, former badminton star Susy Susanti ran to the top of a man-made volcano to light the 2018 Asian Games Flame.

There was one more surprise when Andrea Bocelli appeared on stage.

He sang Neapolitan favourite "Funiculi Funicula", written in celebration of the first railway to Vesuvius in the late 19th century.

A duet with son Matteo preceded the grand finale, "Nessun Dorma", from Giacomo Puccini’s Turandot brought the house down once again.

It recalled the "Notte Magiche" – Magical Nights – of the 1990 World Cup when The Three Tenors entranced the world with opera.

Now the sport can begin in earnest.