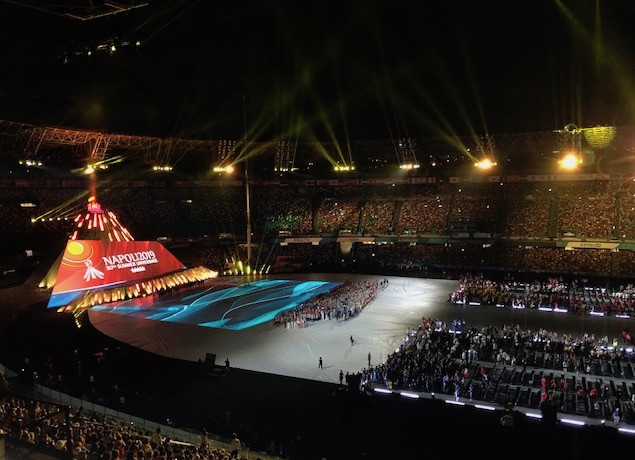 A sustainable Universiade cauldron was lit by SSC Napoli captain Lorenzo Insigne to begin Naples 2019 during the Opening Ceremony here.

Insigne kicked a flaming ball into the cauldron, shaped to resemble Mount Vesuvius, the volcano which looms over the Italian city.

Instead of being ignited by a flame, however, the Cauldron lit up electrically to reduce the amount of gas emitted into the air.

Insigne was joined by team mate Alex Meret, having been handed the Torch by Olympic gymnast Carlotta Ferlito.

As the cauldron illuminated, Italian opera singer Andrea Bocelli performed three songs to the enraptured audience, including a duet with his son Matteo.

The Ceremony had begun with an athletes' parade, in which delegations from the 118 participating nations paraded around the venue before taking their seats in the centre.

"Dear athletes, FISU wishes you every success in the coming days," he said.

"Not all of you will finish with a medal, but the biggest victory will be the chance to leave Naples a better person.

"Look beyond the competitions and you will find wonderful life lessons.

"Learn from all of this and you will become one of the leaders our planet needs."

Next was a video message from International Olympic Committee President Thomas Bach.

"You need to give it your best and make new friends," he said.

"Take important steps for your future as this is your moment to shine in the sport you love so much.

"Always compete in the Olympic spirits of friendship, respect and fair play.

"Perhaps Naples will be the beginning of your journey to the Olympic Games in Tokyo 2020."

The final speech came from President of the Italian Republic Sergio Mattarella.

A fireworks display closed the Ceremony, as the athletes headed back to their accommodation to rest for the upcoming competition.

Around 6,000 athletes are set to participate across 18 sports over the next 11 days.