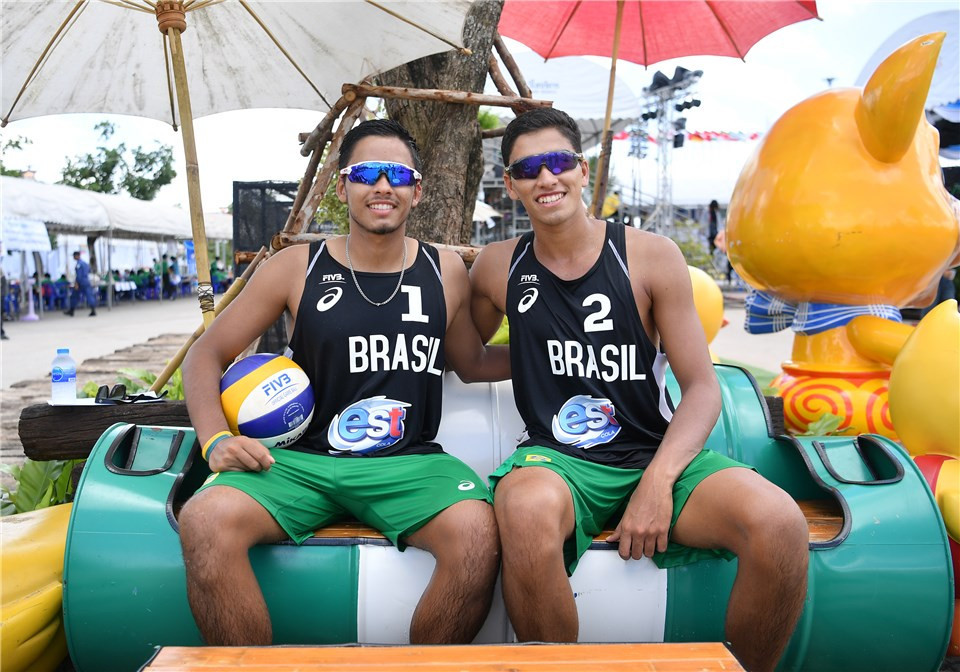 Platre said: “There was good ambience and that put us in good rhythm, we like to play in front of a great crowd.

“It’s hard to keep a winning streak because you have to be mentally tough and always think about about side-out and defence.”

Italy’s Jakob Windisch and Alberto Di Silvestre also ended the home interest of Santitham Khruttha and Poravid Taovato as they rallied from a set down to win 19-21, 21-14, 15-12.

A block by Windisch and an ace by Di Silvestre secured their spot in the quarter-finals.

Windisch said: “It was good to win because they had the home court advantage.

“We had a tough start, but eventually we got the breaks in the decisive moments."

Two Russian pairs complete the quarter-final line-up, Denis Shekunov and Dmitrii Veretiuk, and Vasilii Ivanov and Sergey Gorbenko, who both had to win two matches today after finishing second in their groups.

In the women's competition, the round of 16 has been determined after the final round of group games sent the winners straight through, joined by eight pairs from the second and third-placed finishers who played off in the round of 24.

Switzerland’s Esmee Bobner and Mara Betschart, and Argentina’s Brenda Ailen Churin and Victoria Pozzo Galdon, were among those who emerged victorious in their respective pools.

Bobner and Betschart went through with a 17-21, 22-20, 15-11 comeback win against Lea Monkhouse and Jasmin Safar in Pool G, after the Canadian pair had a match point in the second set.

Bobner said: "We started slowly but got confident after that second-set victory.

“Now it feels great to win the game, thinking that we had almost lost it.”

Churin and Pozzo Galdon, meanwhile, bounced back from a disappointing second set to win 22-20, 10-21, 15-13 against the United States’ Isabelle Bauman and Teagan Defalco in Pool D.

Italy’s Chiara They and Orsi Toth endured a tough three-set match to triumph 19-21, 22-20, 15-9 against Spain’s Maria Belen Carro and Daniela Alvarez, enabling them to finish top of Pool E with three wins.

Mexican pair Silvia Emily Herdrick and Estefania Elizabeth Ibarra topped Pool A thanks to a 21-17, 21-12 win over Thailand’s Pawarun Chanthawichai and Saranya Laesood.

The winners from the round of 24 playoffs included Hannah Ziemer and Hanna-Marie Schieder, and Svenja Muller and Sarah Schulz, both pairs from Germany.

Russia’s Anastasiia Frolova and Aleksandra Ganenko, Czech Republic’s Karin Zolnercikova and Martina Maixnerova, and Australia’s Rebecca Ingram and Alisha Stevens also came up with victories to advance to the next round.

Completing the round-of-16 draw are Monkhouse and Safar, Carro and Alvarez and Bauman and Defalco, who rebounded from their pool losses to win their knock-outs today.

The competition continues tomorrow with the men's quarter-finals and semi-finals, along with the women's round-of-16 and last-eight matches.