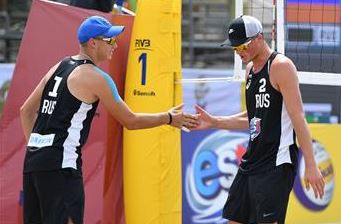 The Brazilians followed up with their second win of the day, a 21-15, 21-12 victory against Norway's Karl Jørgen Mosvold and Åsmund Lyngve Vingen Sunde.

Shekunov and Veretiuk did post their first win in Pool B thanks to a 21-14, 21-14 win against Martin Iglesias and Vicente Orlando Dorguett Torrealba from Chile.

Timothy Brewster and Adam Wienckowski from the United States enjoyed a double victory on their way to the top of Pool F.

They cruised to a 21-10, 21-13 win against Moussa Idrissa and Boureima Moubarak of Niger before dispatching Japanese pair Rikuto Goto and Ryuichi Adachi 21-18, 21-9.

The 21-5, 21-9 victory puts the eighth seeds top of the women's Pool H alongside Cao Shuting and Dong Jie of China, who recorded a 21-16, 21-19 triumph against Chinese Taipei's Kung Shih-Wen and Yeh Hsuan-Tsen.

Thailand's top seeds Pawarun Chanthawichai and Saranya Laesood dropped their opening match in Pool A as they fell to a surprise 21-18, 21-15 defeat against Germany's Hannah Ziemer and Hanna-Marie Schieder.

They are joined at the top of Pool D by Argentina's Brenda Churin and Victoria Galdon, who recorded a 21-17, 21-13 win over Australian duo Rebecca Ingram and Alisha Stevens.

Russians Anastasiia Frolova and Aleksandra Ganenko could not follow up their qualifying victory as the main draw got underway.

They succumbed to a 34-32, 25-27, 15-12 defeat against Brazil's Victoria Lopes Pereira Tosta and Vitoria De Souza Rodrigues in a marathon contest.

Youth Olympic Games gold medallists and reigning under-19 world champions Mariia Bocharova and Maria Voronina of Russia started their campaign with a 21-12, 21-16 win against Canadians Iris Fletcher and Abbey Thorup in Pool C.