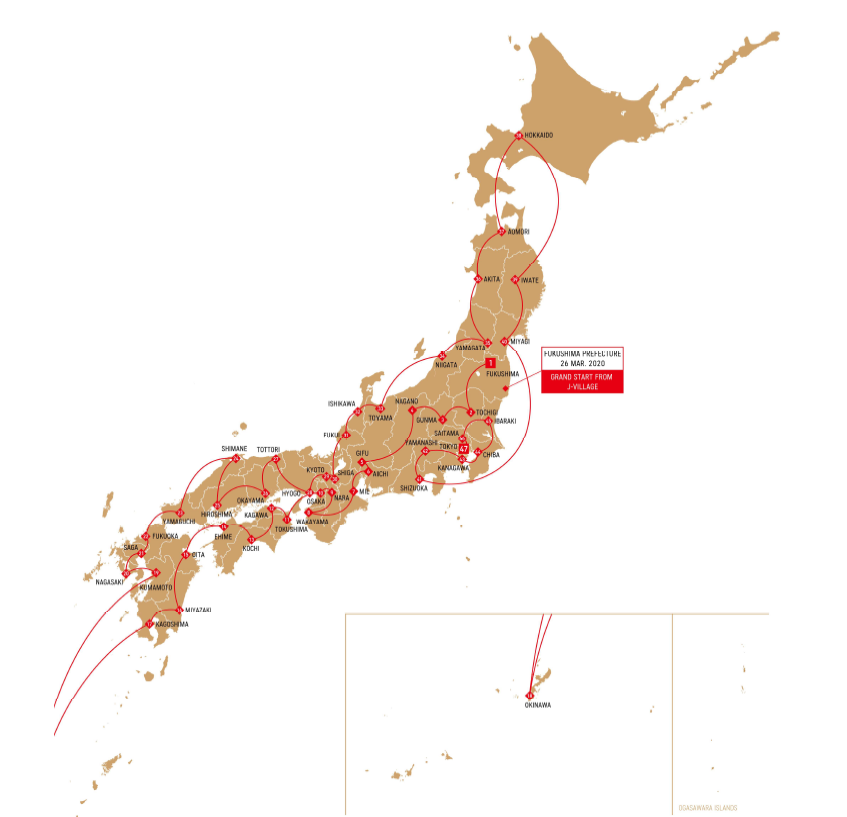 The Tokyo 2020 Organising Committee has revealed the Olympic Torch Relay route, which will take in many of Japan's most historic and famous sites – and also areas touched by tragedy.

The Flame will be taken all over Japan inside 121 days, culminating in the Olympic Games next summer.

It will begin the final leg of its journey on March 26, 2020 from the J-Village National Training Centre in Fukushima, the training facility of the Japan football team.

The Flame will travel to all 47 prefectures of Japan, with the Organising Committee claiming around 98 per cent of Japan’s population live within one hour's travel of the proposed route.

The route will take in World Heritage Sites such as Mount Fuji and Itsukushima Shrine, but will also visit areas affected by recent disasters.

Fukushima has been chosen as a start point after the Tohoku region was struck by an earthquake and tsunami in 2011, which also caused a nuclear incident at the Fukushima Daiichi Nuclear Power Plant.

As well as revealing the route, Tokyo 2020 also unveiled the Torchbearer uniforms and how members of the public could apply to take part in the Relay.

The uniform features the Relay emblem on the front and the Olympic symbol on the back.

The most notable design feature is a diagonal red stripe, echoing the sash used in place of batons in Ekiden, Japan’s historic long-distance relays.

Uniform designer Daisuke Obana said the use of the sash was to invoke thoughts and memories of the Japanese people towards the history of the Games.

He said: “I have interpreted the Olympic Torch Relay as being something that connects Torchbearers and their thoughts.

"In other words, everyone who will participate in the Torch Relay having various thoughts – including about the Games – and the Flame connecting those thoughts.

"In Japan, these Games are being referred to as ‘the Recovery Games’ and so the Olympic Flame will start its journey from an area affected by recent natural disasters.

"I hope that the Olympic Flame that is transported to Japan will bring with it the encouragement and thoughts of people from all over the world."

Games organisers say the Olympic Torch Relay will feature around 10,000 Torchbearers including men, women and children of a wide range of nationalities and ages.

People from all over the world are encouraged to apply and can do so here.

The Organising Committee says people chosen will be "those who provide essential support for family members, friends and colleagues on a daily basis, or have demonstrated the ability to overcome great adversity."