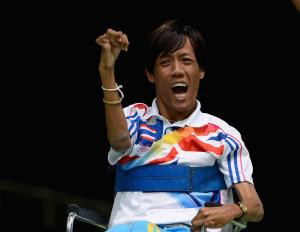 Thailand's Witsanu Huadpradit beat world champion David Smith in the quarter-final of the Hong Kong Boccia World Open on his way to victory in the BC1 category.

Huadpradit, the world number three, defeated Britain's Smith 5-2 to progress to the semi-finals.

There he thrashed Greece's Christos Kypriotis 13-1, before easing past Malaysia's Chew Wei Lun 9-0 in the final.

Vongsa was the victor, narrowly winning 4-2.

Australia's Daniel Michel triumphed in the BC3, beating Patrick Wilson of Britain 4-2.

Stephen McGuire proved the only Briton to take home a gold medal, defeating Hong Kong's Yuk Wing Leung 4-1 in the BC4.